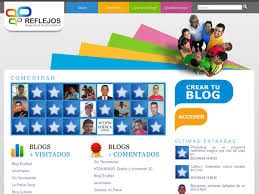 HAVANA TIMES — The online platform Reflejos (“Reflections”) is one of the Cuban government’s maneuvers aimed at offering local citizens a substitute for the Internet. It claims to be a space aimed at bringing together blogs authored by Cuban Internet users and making these more visible, so that they can reach more people in cyberspace.

As you’ll recall, Internet access in Cuba faces many restrictions. A very small fraction of the population has full access to the web, while a considerably larger group has access only to the Intranet, populated by the sites of Cuban State institutions (the .cu domain), and the majority has no access at all.

Within the .cu domain, Cuban telecommunication authorities set up Reflejos, a kind of server operating under the address cubava.cu. This address ought to operate as a personal or collective blogs platform. The claim was that there were no intentions of censoring or controlling the blogging population and that the aim was to make these more visible in the World Wide Web. It offered the advantage of being accessible, as, if not the majority of Cubans, at least the less reduced group of “Intranauts” could navigate it.

As of the spring of 2015, anyone with an Intranet connection was permitted to open a blog in that platform. It all sounded too good to be true, we the poor tend to be wary of such promises, but it was worth a try. Numerous blogs came into being to address a wide range of topics, including cultural, social, sporting, technological, awareness and civic and political issues.

As a collective, Observatorio Critico (OC) published a version of its blog in Cubava, using the address of luchatuyucataino.cubava.cu. I published a version of my personal blog, Bubusopia. The two were originally and continue to be published using the WordPress platform. The materials we’d published on the Internet domain were reproduced here, so as to place them within the reach of those who might be interested.

The OC site experienced decent growth in readership, as evidenced by the visitor and subscription stats. Bubusopia, ultimately an individual space that was updated less frequently and offered a slimmer variety of articles, had less of an impact.

Interacting with a larger public enriched our perspective and gave us more impetus and influence for a while. We had interesting experiences, made new friends, prompted stimulating online debates and made more than one person out there think. For some time, we had something of a trampoline to launch our ideas, our rebellious spirit, and our commitment to the cause of freedom, democratic socialism, the struggle against authoritarianism and all forms of capitalism.

As was to be expected, we quickly drew some sinister glances. First, a rather picturesque “cyber-sergeant” with the name of Istvan began breathing down our necks. The “task” given these individuals is infiltrating “problem” sites, derailing debates, discrediting authors and making these waste time and energy in futile discussions. Sometimes, we were forced to censor a particularly offensive comment, but most of his statements were so Stalinist that they proved ideal to make give our criticisms the finishing touches.

In the long run, the limitations of a space created by Cuba’s bureaucratic and authoritarian State had to surface. Censorship began to strike at anyone who didn’t “toe the line.” The first blog affected was La jugada (“The Play”), whose editor had established cordial relations with us. La Jugada was hit by several, temporary shut-downs and we don’t know whether it will survive the last one.

OC’s site is also suffering censorship, as I’ll show below. The administrators of Reflejos found some of our materials offensive and began by shutting us down a week, then a month and, on third strike, definitively. Bubusopia has already had one strike.

What were the sins that prompted the divine rage and thundering of the gods? La Jugada had social-democratic inclinations and stressed the needs of the underprivileged caused by the government’s current reforms, calling for facilities for undertakings in the private economy. It called for greater haste in the reforms and more thorough social protection. The fellow included a harsh description of the government’s and Party’s past sins. Then (for a second strike), he published an article defending the rights of homosexuals and, finally, another critical piece about Venezuela’s chavista government, following its significant defeat at the recent legislative elections.

Bubusopia, which now has one strike, lampooned the lack of transparency of our policies, government and Party, which have designed the country’s new model behind the backs of the people. It also demanded, from a Marxist perspective, that the Cuban Communist Party define, at its upcoming 7th Congress, the class nature and character of the society it seeks to establish.

Incidentally, a commentator for a different site whose name we cannot recall told us he fared much worse. He was banned from the site on first strike. He had criticized Cuba’s telecommunications monopoly, ETECSA.

This is how the experiment aimed at digitizing Cuban society is being developed by the Cuban State. These measures are far more consistent than any spiels dished out by the Cuban leadership, which is actually reluctant to impel the development of these networks and can go as far as rejecting free infrastructure, evidently offered as a risk investment, from foreign corporations such as Google.

Ultimately, this is another illustration of the mechanisms used by a State that seeks to enter modernity without ceasing to control thought and its expression. At any rate, voices calling for freedom will continue to be raised everywhere, defending the worth and importance of freedom, and finding ways to communicate with the rest of the people. What’s more, I’m going to open another blog in Cubava. It will be up for as long as they let it be. I think I’m going to call it Samizdat. https://en.wikipedia.org/wiki/Samizdat

One thought on “Censorship on Official Cuban Blog Platform Cubava”