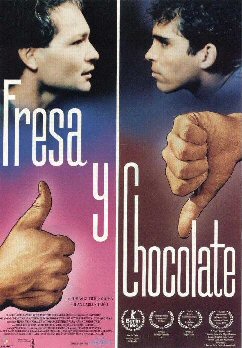 HAVANA TIMES — It’s already been 20 years since the release of Tomas Gutierrez Alea’s Strawberry and Chocolate (Fresa y Chocolate) and many, including actor Jorge Perrugoria, the film’s protagonist, believe that much has changed in Cuba in this time.

Both this renowned, award-winning actor and those who concur with him are right: Cuba has changed a lot over these past two decades. Since the release of this, the only Cuban film ever to be nominated as Best Foreign Film at the Oscars, the country and its people have experienced many changes… but they haven’t been enough.

Pablo, a close friend from my neighborhood, is living proof that we still have a long way to go before homosexuals, transsexuals and bisexuals can stop being treated as inferior beings or sexual perverts.

Pablo is a young homosexual man whose full identity I cannot reveal. I will limit myself to telling his story.

The son of the shadiest of common criminals and a whore, Pablo was expected to become a man of little scruples. What else could people expect from such a genetic combination?

Since birth, Pablo had been a quiet little boy. Though often by his father’s side, his first years of life were not so bad. He spent most of this time with his paternal grandparents and two aunts who simply adored him.

Pablo had not inherited his father’s coarse voice. He also did not resemble him physically. He looked sickly, and his gait didn’t even remotely bring to mind the stride that is characteristic of the neighborhood tough guy.

The father grew more and more worried about that boy who never cried, never bothered anyone, never caused any problems, never threw sticks or stones at anyone, never cursed. He would look at his son and say to himself: “he’s going to change, there’s no such thing as a perfect kid, and when he changes, he’ll be unbearable.”

But the child didn’t change. Quite the contrary, he became even more polite and well-behaved, even more applied in his chores. It was then that the father’s concerns became fears.

“Why do you speak like that, so softly? Who are you afraid of?” He would ask him, yelling.

“Are you a man or what? Tell it to me straight, speak!”

Pablo had just turned 7 and his father was asking him to tell it to him straight. I’m almost 40 and it is hard to be straight with myself sometimes, so, you can imagine what it would mean for someone who’s not even 10.

Pablo was just a kid and he was being asked to explain himself. His father wanted the truth. Though only seven years old, he was brave, he gave it to him straight.

The words were like daggers driven into the father’s ears. Though he had suspected it, they still caused pain, anger, shame, fury. I could tell you he beat him to a pulp, that he yelled at the kid, cursed at him and shoved him around. Suffice is to know that he got on his knees and addressed the heavens thusly: “Dear God, do not let my eyes see so much shame, so much degradation, please spare me all of this.”

The child was abandoned by those who gave him life. Since then, he’s lived in different places, first with his maternal grandparents, then with friends, today with lovers.

It’s been nearly 10 years since the father disowned his son. God sometimes takes his time to answer our prayers, but he always answers the appeals of his children, and he had listened to that father attentively. The Almighty did not want the father to continue seeing such moral degradation, and made him blind for eternity.