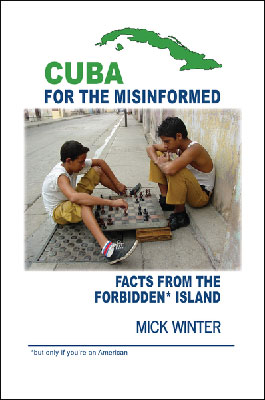 HAVANA TIMES — An asterisk in a title? It’s rare; but in this instance the footnote –*but only if your American– gives the potential reader a clear indication of not just the “side” the book by Mick Winter is coming from, but also the author’s attitude.

The “facts” chosen for inclusion support a particular view of Cuba, while occasional editorializing reminds you that the author thinks the U.S. policy toward Cuba is ridiculous, to put it nicely. Quite possibly every book written about Cuba in the past half century is factually biased (if factual at all) and chock full of attitude, so those characteristics shouldn’t be held against this text, but rather just kept in mind.

As the introduction states, this is not a scholarly work. It is a surface-level collection of Cuba trivia (including 2 pages of cocktail recipes), not intended for the informed. It will probably not convince any of the misinformed either. But for the uniformed, there is much to learn here.

The layout groups short self-contained “entries” on related topics into categories that form chapters. This makes it a great book for carrying in your pack; read a few pages every chance you get on the bus or train.

It’s much like having a 251 page hard copy of a Wiki on Cuba. Unfortunately, Wikipedia is cited as the source for some sections, which would make any high school teacher cringe. But like Wikipedia, this book sends you off on quests of your own, tracking down more detail and checking accuracy, leading to more and more knowledge, and presumably, but not necessarily, a better understanding.

The most surprising part of the book is the dozens of links to YouTube videos– everything from a tour of the mausoleum where Che Guevara’s remains rest to JFK Cuban cigar stories. Instead of keying in the complex alphanumeric URLs (all of which contain the same typo: youtu.be), it is advisable to go to the book’s accompanying website and follow the live links (which makes one wonder why Winter wrote a book instead of creating his own Wiki by the same name).

An unusual number of typos dot the text, and while they are only slightly annoying, it reflects poorly on the author’s seriousness and concern for quality.

Worse are the handful of inaccuracies, including details of treasury department laws and the use of traveler’s checks in Cuba, in the travel section, or like on page 173 where the author claims that “In the 1960s and 1970s, because of the HIV/AIDS epidemic, many were fired…”, but the first case of HIV/AIDS in Cuba was in 1985.

Other “errors”, in the form of glossing over certain topics like unions and the press and missing the point on others such as the Helm-Burton Act and the Havana Club dispute are likely a matter of the author not having a strong knowledge-base to work from.

Winter spent a month in Cuba, where he discovered a Cuba unlike that which most U.S.-Americans have heard about. That experience inspired him to set the record straight, at least a thin layer of it.

But as a dear friend, who has intimately studied and known Cuba for over forty years, says after each visit to the island, “Cuba is like an onion, every time I think I understand something fully, another layer is hiding underneath.”

If that’s the case, this book constitutes the papery-thin onion skin. It is often the most attractive part of the onion, and while it may not be useful for cooking, it has to be peeled back in order to get to the juicy parts.

One thought on “Cuba for the Misinformed: Facts from the Forbidden* Island”