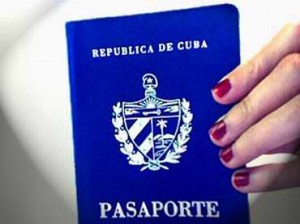 HAVANA TIMES — At last, after a year and a half of high-risk pregnancy, Raul Castro’s government has given birth to the “updating” of the nation’s immigration policy.

I have always thought that anything is positive that benefits the Cuban population, eases the immense burdens weighing down on islanders, simplifies their lives and prevents suffering.

Therefore I believe that what has been done is positive. Regulations have been relaxed, irritating fees have been eliminated, and contacts between islanders and Cuban émigrés are going to be facilitated. Many family members and friends will now have less difficulty in reuniting with each other and many immigrants will have to waste less money paying the onerous costs of consular services.

The permitted duration for Cubans temporarily outside the country will be extended to 24 months instead of 11 months, with all the benefits this might bring. For this and many other reasons that the reader will note, what has happened is positive.

On the other hand, if we want to analyze to what extent this signifies an important step in strengthening the status of Cuban citizenship — of émigrés and islanders — then there’s almost nothing to celebrate.

The reason is because the Raul Castro government has only implemented a few changes that improve its political aesthetics, to win support among some sectors of the émigré populations, as well as send a message to the planet that some things are changing.

A Matter of Rights Not Permissions

But beyond these adjectives of relief, the quantitative ones, there have been no fundamental changes. It won’t take long for the excitement created by the headlines announcing the end of an era to give way to the discovery that we are witnessing a renovation of what we’ve experienced before, one that is as superficial as painting buildings on the verge of collapse for the impending visit by a distinguished foreign guest.

Above all, the immigration issue isn’t a matter of permissions, but of rights. There exists extensive international legislation that enshrines the rights to move freely, to emigrate, to return to one’s home country, and also, obviously, not to emigrate.

Despite Cuba being a signatory to all of those covenants, the Cuban government has proceeded to restrict all rights expressed within them. First, it denied them absolutely, and then it proceeded to sell them – always reserving the power to grant and revoke them.

It would have been desirable for the updating to have moved the pre-existing situation in a positive direction, or at least taken some steps forward. But that didn’t happen, and what the updating of the immigration policy offers us is a certain relaxation of permits that the state grants to its subjects, not a reinstatement of rights to its citizens.

Now Cubans won’t be required to present letters of invitation or tarjetas blancas (exit permits), which means a savings of about US $300 and quite a bit of time. However the power of the state to grant permission — and revoke it — remains intact through the processing of passports.

Migration therefore continues to be a mechanism of socio-political enforcement and control of the population, a powerful mechanism for the expropriation of rights in favor of the unappealable power of the post-revolutionary political elite.

The only Cubans who can travel to and from the island are those rewarded for good conduct, which in this case means their learning to shut up and co-exist with what they disapprove.

Although we know that the Cuban state does not permit such sophisticated liberal qualities as transparency, it always lashes out in a confusing manner, like the new legislation establishing the guidelines for exclusion.

It speaks, on the one hand, of punishable sins of those who threaten hard and yet vaporous concepts (“public interest,” “foundations of the Cuban State,” “national security”) without ever defining these concepts or who determines them, while not even saying who is in charge of the thankless task of rejecting unqualified candidates.

On the other hand, people who have important technical functions related to economic/social development will not be able to catch a flight in order to preserve “the skilled workforce of the country,” nor will they be offered any other alternative than forced confinement on the island for five years.

Another issue is the “mutilation issue,” because the Cuban immigration problem isn’t confined to the issue of how free inhabitants of the island can be to travel outside of the island.

There is also the issue of free movement within the island, and here we must remember that the right of Cubans to move freely in the country is curtailed by Decree 217, whereby many Cubans are living in the capital with the same rights and insecurities as undocumented immigrants in any country the world.

This also includes, in a particularly significant manner, the situation of Cubans living in other countries, who constitute most dynamic 15 to 20 percent — economically and demographically — of transnational Cuban society.

At the expense of this sizeable sector, hundreds of thousands of Cuban families eat, dress and cure themselves. They also carry out small-scale private investments that are now the only source of jobs for the island’s impoverished economy. Meanwhile, the state receives substantial resources through fiscal and pricing avenues.

For these people there is no “updating,” except for a pair of tiny concessions relating to the extension of the stays on the island where they were born, whereas right now they’re required to leave within 90 days.

In short, we have obtained something better than the same old thing, though it’s absolutely insufficient. We’re not facing a change in mentality and concepts with respect to immigration.

It’s too bad that it’s like this, because the relationship between the island with what is effectively its community of emigrants — and what the Cuban leaders are determined to see as a problem for managing — is above all an opportunity.

Cubans living outside the island have accumulated substantial financial, technical and intellectual resources that could be much more important for national development than the few fistfuls of dollars that the Cuban political class — in its parasitic yearning to be subsidized — take out of their pockets.

In its emigrants, Cuban society possesses valuable capital for multiplying opportunities when these can be put in contact with the energy and creativity of insular society.

A better future can be built when Cuban society can optimize its undeniable transnational condition.
—–

(*) This article was originally published in Spanish by Cubaencuentro.com.