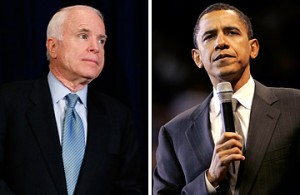 I’m living in Cuba, not the United States, but even so I’m tired of the US presidential campaign. It’s been going longer than the last three TV soap operas combined!

There has been extensive coverage here, with entire round table programs dedicated to the subject and almost daily reports and opinion pieces in the newspapers.

Most Cubans made up their minds on who they favor shortly after the Democratic Party primary ended. Not that people are enamored with either of the two major parties, but they at least see a ray of hope for improved relations under Obama. This means a lot for many families divided by the Florida Straits and politics.

In a recent informal NBC News survey held in downtown Havana 63 percent stated that they preferred Obama; 2 percent said they liked McCain, 13 percent had no preference and 22 percent declined to answer.

While Cuba policy is not one of the top concerns of most voters across the US it is a major issue in Florida. The two candidates have made a proportionately large number of campaign visits to that swing state “won” by George W. Bush in 2000 and then again in 2004.

Numerous polls show that the large Cuban-American population there, formerly a united Republican bastion, is now strongly divided. “Cuba bashing” simply doesn’t attract the younger generations the way it did the exiles that came to Florida around the time of the 1959 revolution.

Younger Cuban-Americans, like the majority of US citizens, are more concerned about the economy, the war in Iraq and other domestic issues, and less obsessed with maintaining a “tough” policy towards Cuba.

The changing times has also taken away the safe-seat status for Cuban-American pro-Bush Congress Reps. Mario and Lincoln Diaz-Balart and Ileana Ros-Lehtinen, who all face tough challenges to their reelection.

While neither McCain nor Obama has said they would consider ending the half century US blockade on Cuba, the lines are drawn when it comes to the rights of Cuban-Americans to visit their relatives on the island and send remittances.

McCain says he will maintain the Bush-strengthened travel ban and limits on Cuban Americans ability to help out their families. Obama has promised to let up on these two issues.

Another factor at play is the voluminous “win-win” Cuba-US trade potential at a time when Florida businesses, like those in the rest of the nation, are hurting and unemployment is on the rise. There’s also the humanitarian issue that weighs on many who would like to help out after Cuba was hit by two powerful hurricanes causing US$5 billion in damage.

Obama and the UN Vote on Cuba Blockade

Barack Obama will make one of his last major addresses to voters in a 30-minute TV message to be aired on several TV networks including CBS and NBC on Wednesday October 29, six days before the US presidential elections.

Earlier that same day, the United Nations is scheduled to vote on a resolution calling for and end to Washington’s blockade against Cuba.

Last year’s vote was 184 to 4 with 1 abstention, showing overwhelming worldwide disapproval of the US stance. When the first vote took place in 1992, Cuba’s resolution received 59 votes in favor, 3 opposed, and 71 countries chose to abstain.

What’s most significant is that many governments that do not approve of Cuba’s system of government agree on its right to make its own decisions without Washington strangling its economy and stifling educational, scientific and cultural exchange.

Commenting on the UN vote during his October 29 address would give Obama a chance to add some substance to his proposal to promote dialogue and a good neighbor policy in contrast to the antagonism promised by McCain.

*Circles Robinson’s reports and commentaries from Havana can be read at: www.circlesonline.blogspot.com or at www.havanatimes.org

4 thoughts on “Cuba Issue Weighs on US Elections”