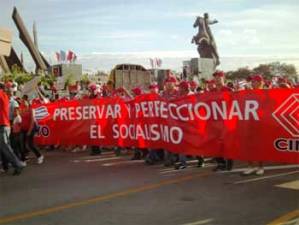 HAVANA TIMES — In a chance encounter a few days ago, I heard a few words that shook me to the core. The friend of a friend was talking about his girlfriend, the daughter of a member of the Ministry of the Interior (domestic security).

Describing her, he said — almost apologetically — “She doesn’t believe in any of that defending the revolution crap. No one there is living in a fairytale. Many of those people are disillusioned.

Then he added, “But ‘they’ can have whatever they want. My girlfriend sometimes walks around with 200 CUCs (over $200 USD) in her purse. She goes to school just for the hell of it since she already has a lock on a job in tourism. What they require is that she be a member of DTI (the police’s Department of Technical Investigations).”

What I expected to follow was some criticism, a protest… but he only said: “I told her to accept it.” Then he completed that sentence with a shrug.

I couldn’t help jumping into the conversation by asking, “But didn’t you just say that she doesn’t believe in any of that?

The young man simply made a gesture that meant something like: “Yeah, but hey, what are you going to do?”

What was most puzzling was that he immediately added, as if he had a glimmer of hope, “We’ll all have to see what happens when everything changes here.”

A response came to me, but I held it in – only out of courtesy.

While my friend was saying goodbye and we separated, my restrained words kept going around again and again in my mind:

More than ever, we’re only helping to complicate things so that others can wiggle out.

More than ever we’re benefiting from lies while hoping others act to defend the inconvenient truth, which exposes us, which makes us equal.

More than ever we believe the world is changing on its own while we worsen things with our inaction, while we hang ourselves with all our weight and try to hide our own little double-dealings (as if that were possible).

Yoko Ono once said, “We are all connected” in this world.

4 thoughts on “Cuba: Letting Others Make the Changes”