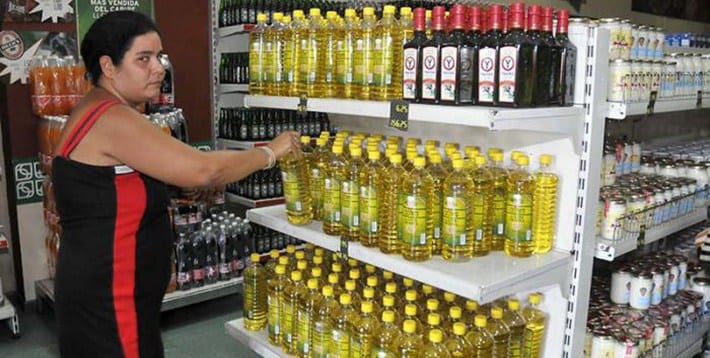 HAVANA TIMES – In an interesting turn of events, the Ministry of Interior Commerce (MINCIN) seems to be heading towards implementing two important changes which stem from the same measure. By announcing that it has drawn up a list of 48 basic items to establish quantity limits on purchases at state-owned retail stores which sell non-rationed products, means they will no longer be stores that operate under a free market scheme.

The second change involves extending rations (in the way they serve as quantity restrictions) to the sale of basic items which were not subject to administrative rationing before at this kind of state-run store.

Seeing as this measure deals with basic items (which are politically very sensitive), information has been surprisingly incomplete. In fact, the complete list of 48 items still isn’t public knowledge, nor are the quantity restrictions that will be applied. Nevertheless, the general sense of the measure indicates that this will need to be carefully analyzed, from now on, to assess their possible effects on the transformation of the national economic and social system.

In 2016, the CIMEX corporation (which belongs to the Armed Forces’ economic group), and runs the stores known as TRDs (hard-currency stores), had defined these commercial establishments as entities which “generally-speaking, operate under a free market scheme. There isn’t a rations booklet there to ensure fair and equal distribution, Prices being the natural mechanism for distribution and to regulate demand, which are directly and indirectly controlled in a centralized mannery by the State.

MINCIN’s recent proposal stipulates that the price mechanism is no longer what regulates demand for a long list of 48 products (which has yet to be published). This would substantially change the nature of regulating demand in this important area of Cuba’s retail market, where a large part of the population is forced to go in order to cover their basic needs.

The effect could be that they are trying to replace a mechanism (the regulated market) by using administrative ukase. Let it be clear that state-run stores that sell non-rationed products still operate in a regulated market.

This is a subject that can be approached from many angles, but I just want to touch upon a select number of them here in this article. I’m not trying to explore this issue in-depth, I just want to draw your attention to some questions which give rise to doubts and concerns.

Rationing isn’t a problem in itself. There are many different kinds of rations, for different reasons and there is a great deal of academic material on the subject, which cover very different situations. However, there is a problem when the justification for rations of basic products isn’t followed up with enough evidence to support the measure or a reasonable explanation based upon this evidence.

This new measure announced seems to be targeted at reducing hoarding of basic goods “in order to prevent a few people from buying large quantities and there being shortages as a result.” Strangely enough, the trigger seems to have been a hoarding case that recently came to light, of a product which isn’t exactly a basic item (apples).

One of the mysteries (at least for now) involves the apparent “leap” that was made to (suddenly) extend rations to nearly half a hundred basic items on the basis of what happened with just one product which wasn’t a basic product. Could somebody explain this line of reasoning please?

There’s no doubt that there have been shortages of basic products in concrete situations, more than once. The recent case of medicine shortages exemplifies the above.

However, there doesn’t seem to be any public evidence in Cuba with regard to shortages of basic items having to do with a systematic hoarding practice that exists for profit. Given the scant information that has accompanied MINCIN’s announcement, it might be that this is really happening. However, if that’s the case then it would be useful to publish this information. However, it needs to be information that isn’t limited to being an anecdote, clearly, including quantitative and qualitative statistics which would allow us to draw an accurate evaluation.

It proves somewhat problematic to adopt a political/economic decision that isn’t backed by verifiable evidence. Some newsreaders have recently projected the image that there is widespread hoarding in Cuba for lucrative reselling. Due to the possible implications this gives rise to, it isn’t something that should be accepted before it is verified. If that were really happening, then stats would have to be given, their importance would need to be analyzed and conclusions would have to be drawn. Economic policy shouldn’t be based on anecdotes.

The ambiguous management of information which has to do with the government’s apparent fear of likely “shortages” of nearly half a hundred basic items carries a political risk too.

People tend to normally associate the imminence of rations with crisis situations. Has anyone thought that people might understand the “48” list to be a sign of crisis looming around the corner and that it was the government’s underhanded way of warning the population about such a crisis?

It is still too early to assess the likely implications of these rations, but it might be a good idea to make a concise note of some of the things that should form part of the debate about this issue.

Imbalances in supply and demand in Cuba seem to be better explained by a lack of supply and not by excessive demand. In an undercapitalized economy, with a dysfunctional exchange rate which prevents replacing imports and problems with foreign currency availability, shortages have more to do with supply than with the strains of demand.

Cuba’s market not only suffers from insuffient supply, it is also unstable. Under these conditions, any likely incentive to hoard products wouldn’t be motivated by interests to resell them to make a profit, but to prevent a situation where basic products are completely lacking. This isn’t new behavior for Cuban consumers. It is the principle of “putting something away for a rainy day.”.

Basic items sold at the Army’s hard currency stores (TRDs) are very expensive (in spite of some price reductions applied in 2016) in comparison when you take into account the average public sector wage. In fact, these prices act as an unequal “rationing” mechanism which affects a population group which could be the majority.

Introducing a second “tier” of rations at TRDs, in addition to high prices, isn’t going to up supply, it won’t really stabilize it and it doesn’t automatically guarantee that quantitative restrictions benefit low-wage consumers who need to have an income that won’t increase because of the existence of quantitative quotas in order to be able to purchase these products.

There is a chance that the very establishment of quotas might act as an incentive for some consumers to buy in excess, regarding the current situation, which (under certain conditions) could lead to shortages which wouldn’t have much to do with reselling products for profit and a lot more to do with the expectation that a crisis of shortages is around the corner, an expectation which might be encouraged by a likely interpretation of why quantitative restrictions on nearly 50 basic items needed to be suddenly introduced.

Could the “48” list become a self-fulfilling prophecy for shortages?

It’s something that we can’t answer right now, for sure. There aren’t even concrete figures to support the above-mentioned points.

I just hope that whoever made this decision has access to these figures and let’s hope they share them!

In the face of missing information, and as an early conclusion, the “48” list would appear to be an out-of-proportion measure that proves to be politically problematic.