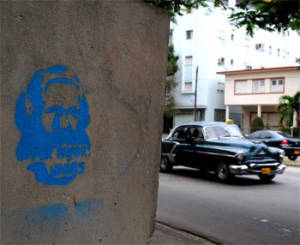 HAVANA TIMES — An editorial in the official Cubadebate website linked the recently concluded “Festival Clic” with the Central Intelligence Agency (CIA) and the anti-Cuban schemes of US imperialism.

Similarly, the publication is seeking to implicate Havana Times in that festival and its alleged imperialist plans. It was outright slander for Cubadebate to write: “It is not by chance that websites such as Havana Times — which joined in enthusiastically in the call — are being encouraged by the United States (government).”

They lied twice: Havana Times is not encouraged by the US government and it did not join in enthusiastically in the call.

Reason Stands Up to Slander

The truth is that Havana Times is a website featuring various positions that predominate among the diverse Cuban anti-capitalist left. It is aided and encouraged not by the US, but by a group of young Cuban rebels, modern cimarrones (maroons), tired of the neo-Stalinist model imposed on the people of Cuba in the name of socialism and anti-imperialism.

These are people who sincerely want to “change everything that needs to be changed.”

The other fact is that one of its columnists did indeed comment on the event, but to then generalize that the website “enthusiastically joined in the call” is a big leap, crude manipulation.

The use of the method of “accusations without proof,” more than being threadbare, lacking transparency and being self-discrediting, it ends up being irresponsible. This is especially so when Cuban society requires actions and positions, which — instead of sharpening conflict and generating violence — encourage contact and dialogue, the “national unity” that President Raul Castro talks about.

A web site like Cubadebate should, presumably, contribute to the aim of healthy debate between different positions, to help get all of us out of this present situation and to peacefully achieve a Cuba “with all and for the good of all” – which in my opinion can only be socialist, participatory, democratic and of course inclusive, horizontal and intercommunicating.

The writers of that editorial should know that, with all its shortcomings, there are laws in Cuba and that defamation is an offense that is liable for prosecution; it is punishable. Ignorance of the law does not excuse its being violated. Impunity might be allowed, but such abuse is not legitimate.

Those who engage in journalism have a commitment to professional ethics, objectivity and responsible language. Their website can lose its credibility with that kind of publishing.

Is the editorial saying that, in Cuba, there are only “their” positions and those of the right-wing? And note, I’m referring to the editorial and not to the Cubadebate website.

The officialist side — opposed to dialogue, used to imposing their positions and accusing anyone who doesn’t share their views as serving imperialism or proposing something they deem to be going against their interests, and who confuse their notions with revolution — is apparently attempting to hang the “pro-Yankee” placard both on Havana Times and on the proactive-critical left, whose ideas they despise. In the absence of arguments, they spew diatribes.

They know they are demonstrating their Berio-Goebbelian approach to the manipulation of information. Subjectivity, illegitimacy, Manichaeism and resistance to change do nothing to help a healthy discussion – unless they intend a “debate” only between those of the same point of view. A true debate would open itself up to differences instead of trying to discredit, isolate or ignore them.

The editorial in Cubadebate joins (and I say “joins” rather than “differs from”) the counter-revolutionary plan that is attempting to eliminate the socialist alternative represented by the various positions on the left.

The ideas of democratic self-management that characterize the pages of Havana Times are not antagonistic to the Cuban Revolution or the process of the socialization and democratization of the country’s economy and politics – rather, these are trying to advance them.

Reality, my friends of Cubadebate, is much richer, and it serves nothing to try and cover it up. Not all of the Cuban left thinks like you, and not all of the all opposition works for imperialism.

I suggest that you get good advice and be careful in dealing with the issues of security intelligence and counterintelligence; otherwise you can put your foot in it. Making false accusations is a spurious method, and many “CIA” operatives have turned out to be “useful idiots” of Cuban State Security and vice versa.

It’s simple: If Yoani Sanchez and other members of the opposition work for the CIA, as this editorial suggests, ask yourself why State Security hasn’t arrested them and why aren’t they being sanctioned.

Either these accusations are false (mud-slinging propaganda), and they are until they’re proven, or it must suit those in power to allow or encourage these “counterrevolutionary fetishes” – either isolating them or turning them into political “magnets.”

It seems there are selective “anti-capitalists”, ones who see “the capitalism of imperialism as bad, while mine is good.”

Who in Cuba does more to benefit capitalism: the CIA, the opposition, or those who “enthusiastically” alienate and exploit wage workers in the name of “socialism”?

To answer this one needs to first consider the relationship between capitalism and wage labor, which is described and analyzed in The Manifesto, Capital; Wages, Price and Profit; The Civil War in France and several other works by Marx.

Yes to the Information Highway

What hurts and hinders socialism in Cuba is not the Internet, but its absence. Technology doesn’t have surnames. It is neither capitalist nor socialist. In any case it is the work of intellectual and manual workers, and it serves those who use it best to serve their interests.

If the Cuban Revolution collapses, it will not be because of the Internet or the actions of imperialism.

Fidel said it best: It will be because of the inability of revolutionaries themselves to fight corruption and bureaucracy, to defend ourselves from our own mistakes. Internet would be a strategic weapon, an unequalled one in that struggle. The fact that people have no access to it favors only those who are corrupt and the bureaucrats.

Obviously much of this struggle urged by Fidel appears in Havana Times, but little in Cubadebate.

I ask Cubadebate, and the other websites that published the “editorial,” to also publish this article.
—–

10 thoughts on “Cuba: Reason Stands Up to Slander”