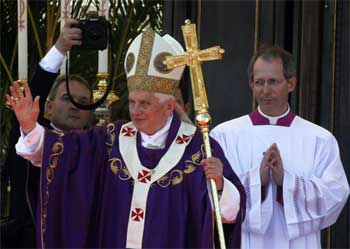 HAVANA TIMES, April 21 — Although for some time I’ve used a pseudonym when publishing in this online magazine, and I explained the reason for this an interview I did with a colleague, today I wanted to use my real name because I felt anonymity was inappropriate in a reply.

After reading “Drooling Over the Pope in Cuba,” a post by Yasmin S. Portales, I felt the need to share some of my concerns.

Firstly though, I would like to clarify that I’m not Catholic or Christian, not in the sense of practicing any official brand of Christianity. I do believe in God and in Jesus as one of the many spiritual teachers who have come to bring light to the world.

As Yasmin pointed out, I understand that only five percent of the Cuban population are Catholics, but I have questions as to whether this insubstantial figure is partly due to the all the persecution suffered in our country by that religious population

Here I would include all those groups ranging from Christian believers and even to those of the Santeria faith, as well as those who have learned and defended practices from eastern culture, such as various forms of Buddhism and yoga.

The author says that, “Since we here in Cuba are very collectivist, the government is undoubtedly embracing the joy of those 550,000 people of the Catholic faith by making it the task of the entire nation to receive the Pilgrim of Charity with all due pomp and pageantry.”

This leaves me with two questions. One has to do with the implicit irony, since irony unfortunately doesn’t allow us to go into greater depth. The other question has to do with that “task of the entire nation” (believers and non-believers) being any different from the tasks of the mass marches which we have experienced and which are also very expensive, or the exhausting campaign for the return of the five Cuban prisoners in the United States, whose personal drama in its magnitude doesn’t erase the suffering of those who are in Cuban jails much closer to us, or of those who out of sheer fatigue chose exile.

In addition, her statement leaves me with a shade of doubt as to whether that pompous reception was a choice of the Cuban people.

I agree that all of these political props can objectively distance the essence of the message of the Pope. However, this essence isn’t peculiar to any church or religion, because it’s a verifiable fact that in every human being we have a spiritual nature, recognized or not, as well as a need for love and a loathing of human circuses (political and religious).

What happens is that these become entangled and eternalized without solving our pressing everyday problems, and much less our existential uncertainties.

But regardless of any paraphernalia erected for that visit, we have the message that was delivered at Revolution Square. The words in themselves had weight, speaking for themselves, despite how much we are trained in believing them to be manipulated and distorted.

In their semantic depth, through our intuition and even from our most basic instincts, the words “love” and “reconciliation” have a meaning with which we immediately identify.

Aren’t these a necessity and an urgency for Cubans right now? Why don’t we echo the message and not the messenger? Why don’t we rejoice that Catholics have had their long-denied celebration and also remember when they were forbidden to celebrate the birth of Christ? An Eastern proverb says that the happiness of a friend is also a blessing for you.

Perhaps Christianity, at least as it has been applied by the Catholic Church, has not solved the problems of humanity, but neither has Marxism, at least not what has been applied here or in any country where they have established socialism as a system.

As for me, I disagree with the effectiveness of a philosophy that denies the spiritual essence of people and persecutes those who proclaim it, just as I differ from a religion that excludes homosexuals or any system that practices exclusion instead of inclusion.

But I immediately echo the idea expressed by Pope Benedict XVI about seeking what unites us, not what divides us.

Jasmine describes the visit as a “a blatant rewriting of history,” but I still doubt if it is a rewriting that’s any different from the current enthusiastic campaigns against homophobia that omit the sad memory of the UMAP labor camps and the “silent” persecution of homosexuals, who were harassed just as much as religious believers. 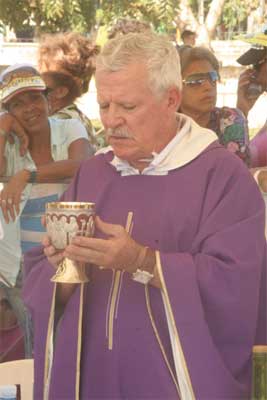 I doubt that this is a “secular state committed to all rights” precisely because that in its secularism, and from the very beginning, it tried to sever the roots of spirituality from Cubans. It tried to maul any expansion of thinking beyond the limits set by Marxism.

This has been rigidly enforced in schools, with pictures and busts of heroes who replaced the Catholic icons, with books that are taught through memorization and not through interpretation (as with the Bible), and in whose messages that are also reaffirmed by ceremonies and slogans.

Finally, in response to Yasmin’s post, I also have doubts that all of the dissidents who sought an audience with the Pope were “right wing” simply because they were said to be, or because they were labeled right wing for the mere fact of being dissidents or claiming not to be “on the left.”

I am left with the bitter doubt that we will be able to really recognize and understand each other, between us Cubans, until we learn to dismiss these absurd divisions that put us on one side or the other, according to the swings of the indifferent pendulum of history.

I watched all the “pomp and pageantry” in welcoming the Pope as it extended to the streets of Havana and Santiago and I read the lay pages of Cuban newspapers, where there’s rarely a word dedicated to the real problems of the population (for example the low wages and the unstoppable exodus).

Personally, I think this only shows that the truth, equality and justice we seek aren’t obtainable through any government, politician or religious figure.

All of this now depends on tolerance among those of us who dream of an inclusive Cuba, a Cuba of opportunity and not prohibitions, of reconciliation rather than bitterness. This is a tolerance that we are substituting with false debates in which there is no coming together but rather more sophisticated forms of distancing.

Our macho culture attaches great value to courage when it includes verbal or physical violence, though we don’t realize that sometimes what requires more courage are acts of forgiveness and respect.