HAVANA TIMES – The Communist dream is to invent a “drug” to cure the “human disease” of freedom and democracy, or at least this is what their actions seem to tell us. If it wasn’t for this small detail, this problem, they would be able to govern forever and be the people’s Gods of Redemption.

Why do we resist being this passive and homogeneous multitude who need to be guided by them, the “Vanguard”? No, they can’t get their heads around it.

What a drag! People want to be their own guides, they want to take part in public life and some even dare to challenge the official and sacrosanct leadership, with their own natural leadership. Because, to the tyrants’ great disgrace, there are always some people who dare to break the mold, who aspire to change things and prefer to be free. And, worse yet, they ruffle up the flock, and they stop forming part of this flock.

Jose Marti described this with his masterful depth and lyricisim, which came to him oh so naturally. And, even though he tried to put it in the simplest terms possible because he was writing for children in this particular case, he hit the nail on the head: “When there are many men without decorum, there are always others who themselves possess the decorum of many men. These are the ones who rebel (…). Embodied in those men are thousands of men, a whole people, human dignity.”

Recently, a series of events and changes have allowed Cubans to gain greater civic awareness. Political Society is the oldest because it has existed ever since we evolved from Primitive Communities. However, it’s very complex and abnormal in Cuba. Power is monopolized by the Cuban Communist Party (PCC) in government, and a very scattered opposition exists underground, or in exile, which hasn’t been able to mature enough to wrestle a significant space on the political arena from the Communists.

The embryo of Civil Society has more potential to break the PCC’s irontight blockade on our people’s freedom and progress, unless a miracle happens within our opposition. I personally believe that this began with attempts to create independent unions on the island, but to tell you the truth, it hasn’t been a spontaneous or fixed process.

The appearance of the Ladies in White in 2003 was the real beginning. A real civil society group, whose objectives weren’t political, as they didn’t aspire to come into power, they were just advocating for freedom and better treatment for political prisoners; defending all of our Human Rights, on the whole. 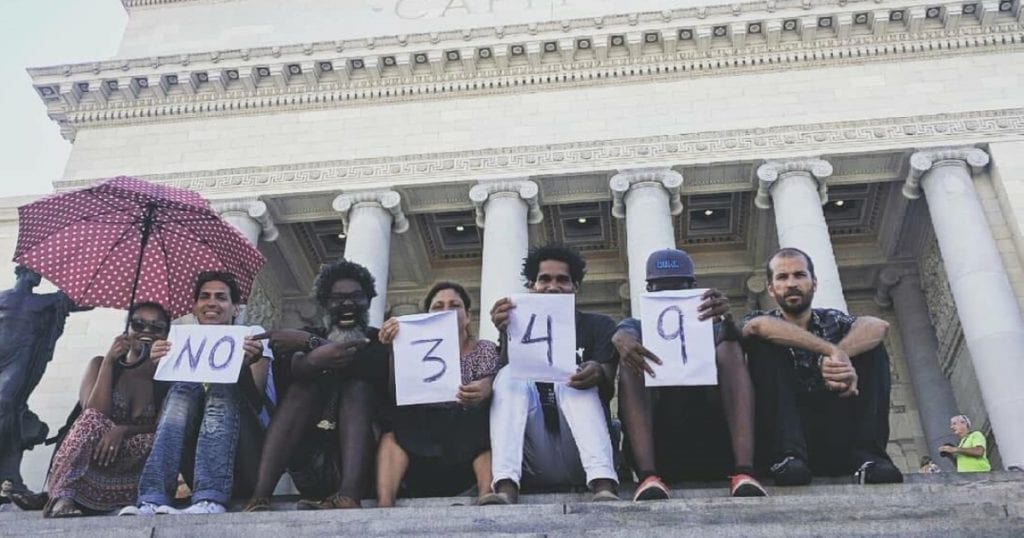 Then, independent art this century has become not only more and more critical, but more distant from the system, almost always anti-establishment, and its climax has been the creation of the San Isidro Group. Artists of their time, restless and unsatisfied with the government’s dogma and chains, they have freed themselves of their shackles and became an “embryo” with the Museum of Dissidence and a “toddler” in their fight against Decree-Law 349.

With public protests in the form of controversial performance art pieces; using subtle artistic/literary works or ones that protest more openly; debates; and a lot of activism online; have sent their message of non-conformity with the Government and are helping to create civic awareness. Predictable as always, the government calls them counter-revolutionaries, puppets of Imperialism and mercenaries. Just like they have been labeling every Cuban who doesn’t follow them blindly, over the past six decades.

Other groups that defend animal rights have been doing interesting work and gaining their own space. They have their own methods of working for their objectives, which are limited because of a lack of resources. They have collected signatures from the population with the intention of pushing for a law that protects animals, and are very active on social media. Recently, they have dared to go one step further and summoned and held a march in the capital. They even got authorization to do so.

It was a very important precedent because it was the first time a group of Cubans took to the streets to protest without being summoned or organized by the Communist Party, which has always done this by using their subordinate organizations. The ones that are made up by a pseudo-civil society, which could ironically be called “official civil society”.

The alarm was so great that news was leaked that the People’s Power official who authorized the march, or tolerated it at least, was “dismissed” from his position. They are terrified of the Cuban people gaining awareness, and slowly trying to reclaim their rights, their sovereignty. They fear that we’ll start off by dealing with non-political matters and then end up demanding things that do away with their hegemony, like a multi-party Parliament and a democratic government, elected directly by voters. This is why they have put on the brakes.

And, these brakes could be seen last Saturday May 11th, when the Police and State Security dispersed the spontaneous Gay Pride march, which had been officially rebaptized in Cuba as the “Conga against Homophobia”. Mariela Castro, Raul’s daughter and Fidel’s niece, a heterosexual woman (yet that doesn’t prevent her), wants to monopolize the Cuban LGBTIQ+ community’s struggle for their rights. Her struggle is praiseworthy, the authoritarianism she uses to fight is despicable. It seems to run in the family.

Baseless criticism has appeared about these civil rights or non-political movements in Cuba. High up in the government they know why, it’s because they threaten their single-party dictatorship. The opposition knows too, because the idea to fight the root cause of all our problems is clear: the lack of democracy.

However, in reality, everything that helps to raise civic awareness is good and useful. The saying “All roads lead to Rome” is pertinent in this case, because every gain in terms of freedom and civic spirit will help us to inevitable rescue our people’s sovereignty. However, in the meantime, we have to be aware that further repression will be the logical response from the Communist Party’s government, who thinks it owns Cuba.

They might even resort to extreme violence against the population (let’s hope they don’t), like in Nicaragua and Venezuela. However, freedom is the most precious thing we have, it has its price and we must be willing to pay for it. We’ll have to prepare ourselves because maybe, just maybe, the time is coming here in Cuba.