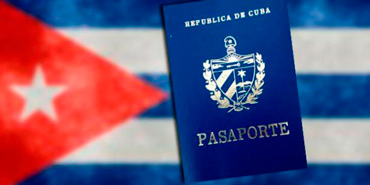 In the first one, “A Cuban passport for travel to Cuba is an unnecessary impediment,” the author says that if Cuba allowed its nationals to enter the island without that requirement, it would be taking solid steps toward a better relationship with its émigrés.

Lazo says that the elimination of that prerequisite “would also be a fraternal and compassionate gesture by the official representatives of the nation toward those Cubans who live outside their native land.”

As for myself, I never expect compassion from those who represent me; I expect, demand and accept only equity and respect. Compassion always emerges from verticality; it establishes a relationship of power, not of equality.

What’s fair is for all of us Cubans to be able to obtain the passports — whose issuance, to begin with, is an obligation of the Cuban state — at a reasonable price, in line with people’s average income, and with a similar fee in all the authorized centers that issue them.

Likewise, Cuba should work on speeding up the paperwork needed to obtain them. A policy that allows the use of the Internet to request the documents and pay for them might be a way to achieve this.

Like many other countries, Cuba could also establish a preferential fee for children and retirees, not as a “humanitarian” or “charitable” act but as a gesture to its nationals with reduced income. In some countries, such as the United Kingdom, the passport is free to people 65 and over and minors.

Lazo writes: “Tens of thousands of these recently-arrived Cubans are postponing, for one reason or another, the process of becoming U.S. citizens.

“However, the possibility of traveling to Cuba expeditiously, with a U.S. passport, could be an incentive for thousands of these legal residents to become U.S. citizens.

“Thus, these new citizens, at the time they vote in local or federal elections, would do so thinking about their interests and those of their families. In other words, they would vote for and elect representatives whose political agenda included the improvement of relations between Cuba and the U.S.”

This theory is extremely risky, because it omits the fact that, since 2001, more than 250,000 Cubans adopted U.S. citizenship, according to 2013 data.

That’s an average of about 20,000 new citizens per year, equivalent to the number of immigration visas issued by the U.S. Interests Section in Havana.

Statistics show that Cubans, after completing their five-year permanent residence, become citizens by a huge majority.

What’s more difficult to prove is that the fact that they become USAmericans enables candidates who favor more effective ties with the island to achieve public office.

History has shown that the demographic change in Cuban emigration since 1990 is in favor of unrestricted family travel and, when the Bush administration assumed the right to limit such travel, along with the remittances and the recipients, those émigrés did not hesitate to punish it with their votes and carried Barack Obama to the presidency. Obama had promised to eliminate the Republican restrictions and kept his word.

Would we Cuban-Americans be willing to renounce our nationality and accept the travel restrictions that burden the USAmericans, the limits on expenditures, the impossibility of sending remittances, and the need to require a special license to travel?

This being the reality, I don’t think that, if Cuba allows us to enter with an American passport, relations would be better.

In a globalized world like ours, dual citizenship should become a right. Cuba, a mixed country that is proud of its mixed culture, should understand that a Cuban who is the grandson of Spaniards or the son of Cubans is a national in his own right.

In his second article, Lazo posts that the 1994 measure that permits Cubans who emigrated before 1970 to enter Cuba using their second passport could be broadened.

The author does not mention that those Cubans are obligated to obtain and carry a “Travel Document” that allows them to enter the country. This document — which costs $100, much less than the $350 price of a Cuban passport and its two $180 renewals for a grand six-year total of $710 — cannot be obtained immediately and getting it involves a complicated process.

In a context where the structures of hostility disappear and full relations exist between the two nations, the restrictions imposed on U.S. nationals to travel to Cuba should be eliminated.

Likewise, the Cuban Embassy in Washington has to operate with all the guarantees and services granted to it by the Vienna Convention, from having a bank for its transactions to giving its functionaries freedom of movement.

We Cubans should not need special authorization of any kind to travel to our homeland. Article 41 of our Constitution guarantees our equality as Cubans. In addition to regularizing its fees, Cuba should eliminate the renewal of the passport and extend its validation to the international standard: 10 years.

Justice lies not in granting privileges to those who hold another citizenship; it lies in allowing us all to acquire our passports swiftly and at a fair price.