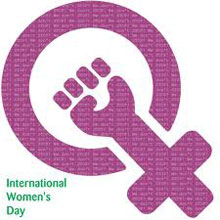 HAVANA TIMES — Yesterday was International Women’s Day and a group of Cubans decided to speak out about the controversial case of writer Angel Santiesteban, found guilty of domestic violence and therefore facing a sentence of five years in prison.

The fact that the award-winning writer is very critical of the government of Raul Castro is what has made the case controversial.

March 8 and the Struggle Against Violence

Writer Angel Santiesteban has been tried and sentenced to prison for violently assaulting his ex-wife. Letters began immediately circulating expressing support for the writer and questioning the court’s verdict. In almost all of these, accusations were made about the victim being “crazy” and this being the exaggeration of a “simple domestic quarrel [1].

No one can judge these events without knowing the depth and the extent of the damage done by Santiesteban to his ex-wife and son, and no one should accuse the victim of fabricating the incident so that he might be convicted for hidden political reasons.

Violence against women is rooted precisely in this quite common gesture of supposing them to lack judgment, independence or their own opinions. Those who make these contentions are breeding aggression, just like those who accuse and blame rape victims for having provoked their assailants.

Cuban institutions and organizations should speak out about this particular case and also about violence against women in our society.

It’s essential to intensify, multiply and organize a permanently visible public campaign against violence of all kinds – especially those perpetrated against women. We must point out those laws that prevent or penalize such activities, as well encourage the kinds of discussions that have taken place in academic settings around specific incidents of violence.

Combating violence against women can only be achieved if we all unite against the inequality that inspires it and if we recognize the rights of battered women to defend themselves against their abusers and report their assaults – even if this involves an artistic or scientific genius, a victorious general, a professional-level athlete or a leading worker.

(Read at the headquarters of the Cuban Artists and Writers Association (UNEAC), on March 8, 2013)

To endorse this letter and/or comment on it, please write to: [email protected]

[1] In reference to the letter (posted immediately below) “Lamentations and Hopes of Another Jailed Writer” by the writer Rafael Alcides concerning this case. His writing is an indication that the struggle against violence against women in Cuba continues to require hard work and effective and sustained efforts.

Lamentations and Hopes of Another Jailed Writer

From Rafael Alcides to Angel Santiesteban

They tell me that starting the day after tomorrow, on Thursday the 28th, your name will be added to the long list of people in different times and circumstances of our national history who have been sentenced to years in prison. I’m sorry for this.

In your case it was for political reasons, from what I’ve heard. Your case was not for embezzling funds from a bank, killing someone, trafficking drugs, stealing state secrets, selling fake visas or engaging in usury, blackmail, prostitution or anything like that.

In your case it was for a simple domestic quarrel with your ex-wife, the mother of your child – in other words, for nothing new in this world. It was one of many disputes between couples who have broken up, magnified by the same passions that set them apart. I’m sorry Angel. I feel sorry for you, your ex-wife and your son.

I also regret that this curious formula of how glorious reconciliations often turn out was not taken into account by the instructors who were in charge of your case, nor by the judges who handed down a five-year prison sentence, or by the Supreme Court.

For all this I’m sorry, Angel, but I remain hopeful.

I have the hope that the writers of the world will embrace your cause when they learn the facts, stripped of the magnification made by the prosecution, perhaps manipulated by people who don’t like you, because in this world where goodness is scarce, there’s no lack of envy. Stand on a corner and ask people about that.

I have the hope that, along with writers, the world’s leaders will speak out. Why not? The UN, the Pope, and God himself are usually discreet but very effective in these things.

I have the hope that anyone on this planet who has more than a dollar will send a Tweet addressed to President Raul Castro informing him of this arbitrariness or perhaps the excessive passion of the judiciary, or they’ll leave their protest posted on a website that’s perhaps opened and administered by any of your readers abroad.

But maybe none of this is necessary. I also have hope that the Union of Writers and Artists of Cuba, our beloved UNEAC, Angel, our UNEAC, by a spirit of justice and caution, recognizing the tremendous commotion that might be caused in the world by this mistake (incompetence, and even fraud, as people other than me have called it) by the judges who handled your case, get involved, turning to the Politburo, going there to present the sensitive parts of this delicate matter that should never have gone beyond the sphere of the block.

Yes, Angel, let’s have confidence in the justice of humans and God in particular. Since the justice system has the last word, now it’s up to the courts to enter upon the scene. I trust them.

You wouldn’t be the first to win their favors. In case they don’t pardon you (which isn’t common in Cuba) the government could make your sanction one of a symbolic character, or let’s say they could reduce it to the minimal sentence, making you serve it at home, so you could continue writing and receiving friends without completely undermining the authority of your misguided judges.

This has been done with others. As I recall, there was once talk of someone — who in one of those bad moments that we usually have in life — hastily pulled out his pistol and blew his brains out in an imprudent act. I also heard about a motorist who was driving on a road in the former Oriente province at excessive speed and killed someone, but the authorities only kicked up a lot of dust. I know of more than one case that was won by chance (because a person ran over or killed someone or they didn’t see the person who stepped out in front of their car), and nothing happened.

Now in this drama — with such a folkloric character that’s usually so funny, but a drama that in the end doesn’t stop resulting in tears.  I can’t forget a true friend, now deceased, who in a dispute with his wife. She committed an innocent act of putting on a bathing suit that he saw as intolerable. At the height of his wrath, more fearsome than that of Achilles’, he fired on his own his house with bazooka and everything, determined not to leave a memory of that evil swimming suit. Likewise, there’s that famous case of an athlete who planted a bomb in the car of his ex-wife’s husband.

Favoritism? Corruption? Abuse of power? I don’t think so, Angel. Indeed these are in fact actions previously condemned by the law. But the law is deaf, blind. The law only has the voice for declaring sentences and hands for sometimes seizing and leading you to the wall.

Carlos Manuel de Cespedes was often authoritarian and even tyrannical, and sometimes underhanded. Thinking about his coup against Aguilera, thinking about the slaves who he freed on the night of their uprising at the Demajagua sugar plantation. But in fact he didn’t free anyone.

The slaves weren’t his. Neither was the plantation. It was his brother Eduardo who, incidentally, had lost those holdings due to gambling debts, and also — also! — the slaves involved in his gesture to the gallery were already old.

However, neither this shrewdness nor the initial premeditation could be calculated in the soul of Carlos Manuel de Cespedes. But when we look at his position when the Spanish enemy took his son Oscar prisoner, we know that it was then, at that moment, when the little man ambitious for glory suddenly rose to the stature of the father of the Cuban nation for all times.

Those with advantages, that I mentioned to you in brief examples, deserved justice, Angel Santiesteban, they deserved it: that constitutes understanding, recognition — not forgiveness, not charity, no: acknowledgment — for their lives of service to the nation to whose glory they had contributed. They fought as guerillas in the Sierra Maestra Mountains or attacked Batista’s presidential palace or brought back world titles to Cuba.

You, of course, as we know, are not an athlete, nor were you in the Sierra Maestra. The school for training commanders in the Sierra closed many years before you were born. But you’re a cultural hero. You’re an award-winning author, a man who has spent more than half of his life writing, and you are someone who has won several awards that honor the country, the nation, the bigger picture and for always, because governments come and go, Angel, they come and go, but the country remains.

That is why I have the hope that they won’t give you less than what they have given other heroes. I don’t think it matters that you are by chance also a dissident, a man of the political opposition.

The opposition is the largest party in the world. In all countries, 60 or 70 percent of the population belongs to the opposition without that being considered a demerit. In short, all those who were prior to being in power were in the opposition. Look at poor Mandela.

In any case, my dear friend Angel Santiesteban, we’re talking about justice, not politics…about justice. And my memory of the future, and my experience of 80 years of living in this world — which I’ll celebrate this June if God permits me — tell me, they’re telling me that you will receive justice, Angel, that you who will come out under house arrest to atone for that family quarrel, with a sentence in agreement with what in a few years, after all this is over, will be folklore in the neighborhood, even a joke to your ex wife: “What a shock I gave you,” I hear her saying while she, there in those days back then playing dominoes and serving tea to visitors. As for me, on this morning of February 27, 2013, I’m finishing to write these lamentations and hopes, which will also become folklore.