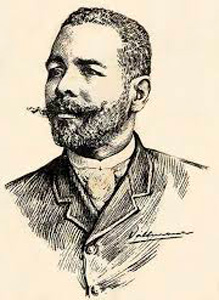 HAVANA TIMES — I have heard our country’s media make the inappropriate remark twice. The first time was on the radio, during an educational program aimed at children. The second was on a brief television show.

The remarks had to do with General Antonio Maceo y Grajales and his nickname, the “Bronze Titan.” Anyone who knows even a tiny bit about Cuban history will likely know something about the historical significance of this figure. Few Cubans have been worthy of the profound and genuine recognition he has earned for himself as the leader of Cuba’s most epic anti-colonial struggles. In the programs I am referring to, they explained that Maceo had earned the epithet of “Bronze Titan” solely because of his heroism and his daring military campaigns.

An important aspect of the historical significance of the son of Marcos Maceo and Mariana Grajales – and of his particular charisma – is, however, his background. Antonio was the member of a black family that lived in Cuba’s eastern region. We shouldn’t forget that the first war of independence was begun and led, for the most part, by people of certain social standing – estate owners, lawyers and others who were mostly white. Their sacrifice is doubtless worthy of respect, even in the case of those who took up arms without first freeing their slaves. It is also undeniable, however, that a man like Maceo had to be truly exceptional to stand out in this context.

Naturally, such an exceptional person was to achieve an unparalleled popularity among the independence combatants out in the field, a popularity that would also naturally spread among all honorable Cubans.

He earned for himself the nickname of “Bronze Titan” with every heroic deed that inspired his men and frustrated his enemies. The nickname became popular as a reflection of the unshakable and lofty willpower that guided his actions in life. But it also made reference to the natural color of the alloy, dark like the skin of men like Maceo and his brothers, and other glorious heroes of equally humble backgrounds, like Guillermo Moncada and Quintin Banderas (and others that are less renowned).

Had Antonio Maceo been a white hero, his nickname would merely have been “The Titan”, just as Ignacio Agramonte’s was simply “The Major”, Carlos Manuel de Cespedes’ “The Father of the Homeland” and Jose Marti’s the “Master” or the “Apostle.” All are lofty, admirable and admired figures. Since they were white, their heroic nicknames didn’t include something which was considered natural.

Maceo’s case had to be different in a society where slavery made racial discrimination take root. Of course, stubborn forms of racism haven’t been able to resist the temptation of besmirching the image of this renowned black man some. It is said that, at a certain point in history, some false erudites sought to whiten Maceo, since it was unthinkable for a black man to…well, you get the picture.

At any rate, more than one history textbook shows images of the Bronze Titan that seem to have been dipped in bleach. I think it’s safe to assume that, had Mariana Grajales been white, she would have been proclaimed the “mother of the homeland.” No other woman is as deserving of such a title as she is, to be sure.

In my opinion, we must not neglect this highly significant element of Cuban popular culture and sentiment. It is true that, in the society we aspire to build, citizenship and integrity ought to be the only things of importance, and that the artificial distinctions between black, white and mixed race ought to disappear. That said, we must respect the feelings of pride and satisfaction that a hero of this stature awaken, and those that the color of skin inspire as well – the pride and inspiration it embodies among those who have always been excluded, marginalized and discriminated against. Even if the scourge of racism is overcome definitively, the people and struggles that contributed to this end at one point in history will be eternally deserving of our respect.

I would like to urge those who author the scripts for media programs to respect historical, cultural and social values, and not to treat them lightly, such that the next time they explain why Maceo was nicknamed “The Bronze Titan”, they bear these things in mind.

6 thoughts on “Cuba’s Antonio Maceo Was a Titan, and He Was Black”