HAVANA TIMES – Popular debates about Cuba’s new draft Constitution have recently come to an end in our neighborhoods and workplaces and many people in Cuba and beyond our borders think that these debates have been successful for Cuban society.

Especially the International Left, and the Spanish in particular, seem to be convinced that the multiple suggestions for things to be amended, removed and/or added to the document in question are proof that we do have a democratic system in Cuba and that the European Union’s latest decisions are not justified, much less those of Trump.

However, does this Left know about the details of this Constitutional Reforms Process? This law of laws that should govern economic, political and social life in Cuba and is still a great enigma for many Cubans? I’m not too sure and that’s why, as of today, I am writing a series of articles that analyze some of the most controversial aspects of the new Constitution that is being proposed.

What would happen to Pablo Iglesias (of Spain’s Podemos party) if this Constitution were in force in Spain?

A lot is being said about the changes and restructuring made in the draft Constitution, but, in order to begin our scrutiny of this new text, we need to start by looking at the points that are only undergoing textual change, without changing the nature of these points: the long preamble and Articles. 3, 5 ,6, in Chapter 1.

I must admit that I am surprised to see that the Constitutional preamble has only had a few slight tweaks in the new version. The intention to present the Cuban Revolution as the epitome of the historic process that began with the Spanish conquest and colonization remains as does the idea that all Cuban society is absolutely homogenous in their way of thinking. Especially critical of the Republican (1902-1958) era, the document only praises events post-1959. There isn’t the slightest mention of the Revolution’s mistakes, arbitrary actions and excess.

UMAPs (forced labor camps), open discrimination of religious followers and the sexually diverse community, standardization processes and outrages during the Five Grey Years which ostracized or forced so many intellectuals to leave the country… these are all avoided in this kind of introduction which offers a biased vision of our national history.

But anyway, anyone could overlook this kind of introduction, which they don’t deem completely necessary and think that, at the end of the day, it’s more important to read what the document actually says (Cubans on the island and the diaspora community forgive me if the picture I’m trying to paint is a little forced).

I suggest we imagine Pablo Iglesias (leader of the Spanish Leftist movement Podemos), living not under the safety net of Spain’s constitutional monarchy, but under what is being stipulated in Articles 3, 5 and 6 of the current Cuban Constitution, which has been amended ever so slightly in the new draft version (they continue to form part of Chapter 1 which is now called “Fundamental Principles of the Nation”).

For starters, let’s say that Iglesias found Article 6, which treats the Young Communist League different to other social organizations, a little strange (to say the least). Let’s imagine that in Spain, this constitutional favoritism played in favor of the Socialist Youth of Spain or, (committing sheer heresy) youth from the Far-right party Vox, who recently held a protest in Madrid where they demanded that Catalan independence efforts be suppressed, and they just took away a surprise advance in the Andalusian elections.

Well, let’s imagine that Mr. Iglesias believed that this article was clearly discriminatory and that he would become a little puzzled reading on when he discovers that Article 14 of the new draft Constitution states and I quote: “The Cuban Socialist State recognizes and encourages mass and social organizations…”. Does Article 6 which clearly defines the State’s position towards one organization in particular make any sense then? Shouldn’t the objectives of this organization be better off included in the Young Communist League’s Statutes rather than in a basic legal document like the Constitution?

Approaching Article 5. is even more complicated as it not only defines the Cuban Communist Party’s objectives, but also maintains that this organization is the supreme leading force in Cuban society and the State and it adds an extremely important adjective: only. If we consider that Article 10 in the draft Constitution states that: “… sovereignty resides non–transferably with the people, from whom all the power of the State emanates,” then we are faced with a tricky dilemma.

Can any party be considered the holder of sovereignty forever? Do we have to think that this party will have absolute and unwavering support in the future? How would Mr. Iglesias find a way to take on the fascists in the PP, the PSOE caste or Albert Rivera’s Citizens if any of them were the only legitimate political party in Spain? In fact, would these new movements that have now put the PP/PSOE pendulum of power in check, have been able to exist? Can anyone imagine Gabriel Rufian and his famous “no is no” before Rajoy’s inauguration in a context like the Cubans are being proposed? 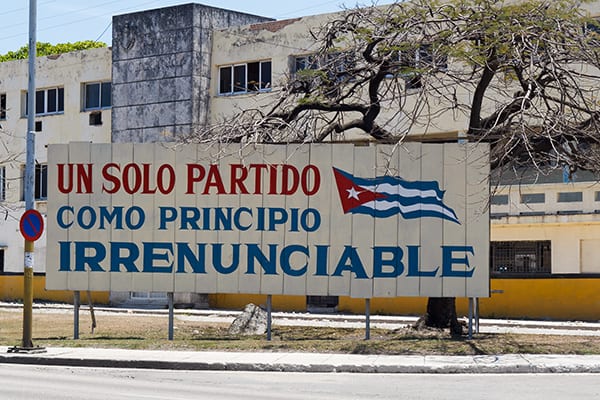 And then there is the severity of Article 3, which not only makes any political game impossible in Cuba, but is also an obvious threat to anyone who tries to overthrow the political and social system that the Constitution establishes, stating: “All citizens have the right to fight, using all means (…) against anyone attempting to overthrow the political, social, and economic order established by this Constitution.”

In other words, if this article were applied to Mr. Iglesias’ actions, his Viva la Republica, which he proclaimed not too long ago, would have put him straight in a jail cell waiting to be put on trial for treason given his opposition to the constitutional monarchy.

Exclusion, timeless imposition of a social model. I advise this passionate Left, who continue to hold Cuba as a beacon of utopia in today’s world, to reflect upon the Constitution that is being put forward to Cubans. We will continue to do so.

6 thoughts on “Cuba’s Constitution and the Uniformed Left”