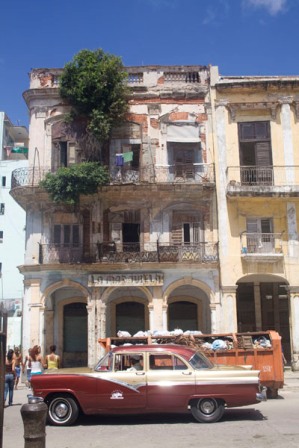 HAVANA TIMES, June 9 – Very soon Cubans will be authorized to buy and sell housing, which is an old aspiration of people.  In fact, this was among the five most repeated demands raised by islanders during the national discussion held back in 2007.

The reform guidelines approved in the Party Congress (April 2011) don’t explain — nor are they required to — how that transformation will move forward, therefore some voices now fear the social and economic consequences that might arise.

Learning from Spain and the USA

I read some concerns of Cubans who have emigrated and I find them logical, keeping in mind the fact that those who reside in the United States as well as in Spain know full well what a mistaken real estate policy can mean.

Cuban socialism has the possibility of drawing from the experiences of those countries that transformed housing into a commodity for speculation, causing prices to skyrocket and making bank loans un-payable.

In Spain there are millions of empty apartments, constructed only because “housing is a sure investment that always appreciates.”  At the same time, millions of younger people are reaching their 30s still living with their parents due to the lack of affordable housing.

The real estate bubble finally exploded resulting in large numbers of American and Spanish families losing their homes and the equity they had paid the banks through their mortgages.  Those same banks came out on top – like casinos, they never lose.

The opening of Cuba should keep in mind those experiences so they don’t commit the same errors. After 50 years of real estate immobility, one runs the risk that the craftiest individuals will devote themselves to speculation and prices will shoot.

The other danger is the end of socially mixed communities that have existed up to now.  The threat is that separate neighborhoods for the rich, the middle class and the poor will form, as occurred previously in Cuba and continues to happen in many countries of the world.

However, there doesn’t seem to be an option.  The current situation is untenable. The crisis is such that almost half the housing is in standard or sub-standard physical condition while the last government programs for new construction ended in total failure.

For decades the bulk of the work was in the hands of “micro-brigades” composed of people in need of housing; they would take leaves from their regular jobs for years and work as impromptu builders.

This program was carried out in almost all sectors; even personnel of the Foreign Ministry would take sabbaticals to devote themselves to building for a number of years, with many diplomats working for some time as assistant bricklayers.

I don’t have data to assess the ideological results of the plan, but in terms of construction those “micro apartments” turned out being far from excellent, which is logical (at the Institute of International Relations they don’t train the attachés to erect walls).

It’s true that when one of these efforts begins in a neighborhood, the surrounding residents become ecstatic because they’ll be able to repair their houses by buying materials on the side.  All they have to do is reach an agreement with the contractors to resolver (“solve”) everything that’s necessary.

The theft and misappropriation of supplies in the construction industry is so common that a Cuban comedian claimed: “We were going to construct socialism, but the materials were stolen.”  In this way the black market has become the principal supplier for repairing and enlarging homes.

For the poorest families it has been almost impossible for them to improve their housing.  Materials are sold at subsidized prices, which turned out to be a great sin because it allowed for these to be monopolized and resold for higher prices to those who could pay.

To make things worse, though Cubans were provided with housing, they weren’t allowed to sell or exchange their units for smaller ones and cash back.  Nonetheless, many people did this despite running the risk that the government would confiscate their properties.

The recent relaxation of the regulatory scheme produced an immediate change in the urban landscape.  People are fixing up the houses, enlarging them and even building new ones. The construction sector is beginning to grow rapidly.

Private factories producing bricks and blocks are being set up, self-employed workers are making sand reappear ever since the gates to the quarries were re-opened, and brigades of bricklayers, carpenters and plumbers are working endlessly.

The currently more flexible structure will allow some people to sell their large houses that they’re unable to maintain and buy other ones more in line with their needs, while those who possess money will be able to spend it legally on housing.

But if one wants this new measure to facilitate Cubans access to a roof, and not the opposite, it will be necessary to establish a regulatory scheme that regulates that activity, thinking of how to prevent speculation and artificial price increases.

Housing is a civil right that shouldn’t be considered simple merchandise.  If it’s an economic absurdity to seek to eliminate the real estate market, to leave it free and without controls would be a social absurdity.

An authorized HT translation of the BBC Mundo original in Spanish.

One thought on “Cuba’s Housing Market in People Terms”