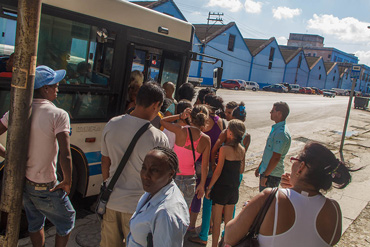 HAVANA TIMES — It’s ten in the morning. I am in Santiago de las Vegas, finishing up some pending chores around the house. Finally, I say goodbye and go out, headed for Vedado, to collect my salary for July and my vacation time. It doesn’t amount to much, but 195 pesos is better than nothing. I thought about this on my way to the bus stop.

I made three stop-overs to reach my final destination. First, I took a bus from Santiago de las Vegas to Rancho Boyeros. Then, I had to hitch a ride with two cars, for, had I taken the bus all the way to Havana, I would have taken two hours to get there (and suffered both the heat and overcrowding).

In short, I was in no mood to get to where I was going covered in sweat and worn out.

I was finally able to reach the office where I was to collect my wages, but, as usual, there was a line of people ahead of me – to remind me that you have to wait in line even to collect the fruit of your labor.

Waiting at the bus stop on G street, the money already in my pocket, I was joking around with a workmate about what I’d buy with my salary.

“I’m going to buy a mansion in Miramar.” I said.

“How much did you get this month?” He asked me.

“Oh, you got short-changed. They paid me a little more. I’m going to travel around the world with what they paid me, and I’ll still have enough to buy a house in Atabey, near where “the unnamable” lives and another one near the beach, in Guanabo.”

“Well, look at that, I hadn’t thought of that. With the rest of my money, I’m going to travel around the Middle East. I think I’ll go to the pyramids of Egypt. Ah, but I won’t go too far north. I don’t want to end up in the middle of a war,” I jokingly added.

“Hey, the bus headed for Santiago turned the corner a while back. It should be arriving soon.”

“No, bud, I’m visiting a friend in another neighborhood this afternoon. I’ll be taking the 174 to Vibora.”

“Ah, well, there’s a bus that takes you down there. I’m catching the same bus, but won’t be going as far as you. Look! That’s our bus over there,” he said, pointing towards a bus that was coming towards us down G street and had just crossed 23rd.

At the bus stop, people were thronging, desperately trying to get on the bus through the front or back door. There was an inspector at the back door (to keep people from boarding without paying the fare, I assumed). I paid her and waited to get my change back.

“Miss, could I get my change, please?”

Without looking at me, she dropped twenty cents into my hand. There was some change still missing and, seeing that she had abundant spare change, I insisted:

“I’m not here to change money,” she replied, rudely.

“Listen, you’re breaking the law!” I said to her.

“Breaking the what? Come on over here, come on!”

Seeing she had gone hysterical, I decided to treat her as a hopeless case, but I told her she was breaking the law twice, as I felt I was fully within my right to get my change back in full (the fare is only forty cents, not a peso or eighty cents). I left her at the stop, talking to herself like a parrot, alone with her conscience.

Did you see that?” I asked my friend.

“Yeah. The person talking about the law, that was you?”

“I thought so. I recognized your voice, but I wasn’t sure.”

“Of course. It’s not so much the action as the way they do it. They insult you to your face.”

“It’s a shame,” I said with a tone of regret, “it’s a shame structural corruption in this country has reached such levels, despite the ‘efforts being made.’”

He smiled and said to me:

“This country is a mess from head to tail, buddy.”

“Well, hell, if people like that behave this way, I can’t begin to imagine how things work at the higher levels. But, ok. It’s our dump, and since I live in it, I have every right to criticize it, because I know it better than anyone, and it might change because of it,” I replied.

“Brother, get used to it. This small country of ours is the perfect place for bare-faced thieves and people who are constantly breaking the law,” he concluded.

One thought on “Dreaming and Wake-up in Havana”