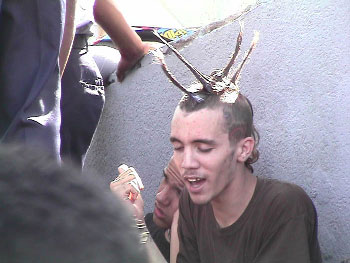 HAVANA TIMES — A few days ago, Cuba’s Round Table TV program addressed the issue of what young people – and the Cuban people in general – wear these days. It’s true that the way some young people dress today is a bit curious, but this is not a question of right or wrong: it’s simply a way of dressing different from what was in style in earlier decades.

I see many young people wear their pants low, beneath the waist, to reveal their underwear. This is the era of tattoos and piercings, worn on one’s eyebrows, ears, tongue or bellybuttons. Many, including people who are not so young, have become veritable living pincushions.

There’s really nothing we can do about this. It’s what’s in fashion these days. The eighties and nineties are behind us. Perhaps these new fashions have flourished because we feel a little freer these days.

We feel free and we don’t want anyone to tell us what we should wear, or what music we should listen to, if it’s music we’re talking about.

Personally, I believe everyone is free to wear a piercing wherever they wish to and to wear the clothes they like or is available to them (not everyone can afford to wear good, new or elegant clothes).

As we know, everything in Cuba is expensive. This is especially true of clothing, let alone shoes. Even recycled (used) clothing is sold at ludicrous prices.

There have always been problems with school uniforms because young people want to look good all the time. In this connection, I feel that school uniforms should be worn properly.

That day, the Round Table was taking calls and a viewer phoned and, among a number of other things, asked why the Cuban flag was used on tank tops and T-shirts.

They didn’t have an answer for this. The commentators chose to focus on her other questions. Of course, they couldn’t really touch on that issue. Currently, the Cuban government is making quite a bit of money selling printed images of the country’s traditional symbols.

I recall that, years ago, anyone could have ended up at a police station merely for wearing a T-shirt with any flag on it, be it that of our worst enemy, or the Union Jack, to mention two examples.

Today, things have changed: anyone can wear a tank top with any image they like and nothing happens. I am for that.

And what about Che Guevara? I believe his image is the one that sells the most in our stores: a T-shirt with an image of Che Guevara printed on it can cost as much as 10 Cuban Convertible Pesos, and it sells like hotcakes.

Che Guevara must live on in our memory for ever so, in the process, he can help boost our economy…don’t you think?