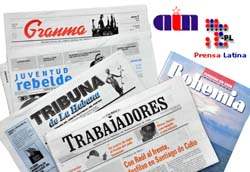 HAVANA TIMES, July 14 — “Providing systematic, truthful and diverse information that allows an approach to reality from all of the complex angles that can be offered doesn’t constitute a favor, but a right of the people,” proclaimed an article in the Granma newspaper.

The fact that the “official organ” of the Cuban Communist Party (PCC) published such a statement of principles is unquestionably an important first step towards the attainment of the type of journalism that God sends and Cuba needs.

However, the Granma article goes on to place the blame in a curious fashion.  According to this piece, the problems of the Cuban press are due to “the lack of understanding of many administrative officials,” who impede their journalistic work.

The newspaper complains that the authorities erect obstacles against reporting even on primary schools or some company that recycles tires.  Such sensitive areas require the authorization of a vice minister.

The foreign journalists in Cuba can certify that all this is true.  I myself spent two years waiting for an interview with the Ministry of Agriculture, and the authorities took several months to give me access to hospitals to write about infant mortality.

But there is something essential that fails in the analysis of Granma.  I’m referring to the passive and obedient attitude of the newspaper that remains silent and sits around waiting for official permission before accessing information and disclosing it.

What’s clear is that on many occasions these permits aren’t necessary to investigate and publish what’s happening in the country.  They could have done this in such resonating cases as the deaths of patients at the Mazorra psychiatric hospital, the corruption discovered at Cubana Aviation and with thousands of other issues.

The editors of Granma could have sent journalists to the psychiatric hospital or to the airport instead of committing their research teams to issues as “momentous” as finding out how much automobile parking attendants earn.

Now they’re seeking to blame politicians and officials for the publication in their pages “of boring, improvised and superficial materials” when that “merit” clearly belongs to the management of the newspaper.

It’s true that politicians avoid us.  It’s a fact that they issue orders to limit our accesses.  But even the president recognizes that an unnecessary amount of “secretismo” exists, though that doesn’t justify journalists sitting around and not lifting a finger.

Not only in Cuba do officials put up obstacles to our work.  It’s necessary to remember that in other countries these can even cost the lives of our colleagues, and though regardless of this, many of them continue working with seriousness and courage.

If Granma really believes then that information is a “right of the people,” they should defend it, going over the head of anyone who stands in their way and denouncing in their pages those who violate that right, despite the position they might occupy.

Begging for official permits will not guarantee citizens’ access to information.  If that’s the true objective of Granma, it will only be achieved by stepping across the line of all those prohibitions of doubtful legality and no morality.

How powerful can the forces opposed to change be when the majority of the population, the highest levels of government and even ordinary journalists demand that the press becomes a critical reflection of society.

The management of the media holds in their hands the opportunity to respond to that general aspiration.  But rather than handing out blame, that road leads to a type of self-criticism that puts an end to the docility that has done so much damage to journalism in Cuba.

If they don’t do a better job it’s because good journalism needs three other ingredients: independence from spurious commitments, the irreverence to address any issue, and the courage to look for problems with the powerful.

In the words of Jose Marti, the press “must disobey the appetites of personal well-being and relentlessly attend to the public good.”

An authorized Havana Times translation of the original commentary posted by BBC Mundo.