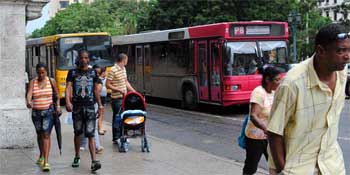 HAVANA TIMES, March 22 — Once again Havana’s public transportation system is in crisis. Again the mass media of the party-government are pointing the finger at “transportation workers and indisciplina social (public negligence).”

Again they are advocating more control and repressive measures used against workers and the bus users.

For some of them, it seems “these people don’t deserve the sacrifices made by the state. They aren’t worthy of the confidence of their leaders.”

Yet the state-government is maintaining its low wages at state enterprises and continues to ignore the proposals by workers and the left for introducing co-management, self-management and cooperatives in this sector.

Indeed, they are failing to live up to their own “Guidelines” reform program as it relates to the extension of co-cooperativism in all spheres of production and services, though that plan was approved almost a year ago (last April) by the Sixth Congress of the Communist Party (PCC).

How much longer will we remain in this cycle of political, economic and social inconsistencies?

How much longer we will have to listen to the “journalist” defenders of the bureaucratic status quo, expressing the same anti-proletarian and anti-popular dribble?

How much longer will truly socialist proposals be ignored by the government-party?

In an article written in July 2006, almost six years ago, under the title “The Urban Transportation Crisis in Havana. An Alternative: Transportation Cooperatives,” I noted: “When these buses arrive (referring to the Chinese Yutong buses) a set of measures will be required to ensure their correct and rational use. Without these, what could soon occur is what always happens: After a few months or a few years, the entire fleet will have to be replaced due to the lack of proper maintenance and use.”

Well, here are the facts. Today we are facing the same problem, which has as its principal causes: the nationalization and centralization of public transportation; the lack of encouragement of private carriers to become organized into cooperatives; and finally, the lack of the socialization of that industry. 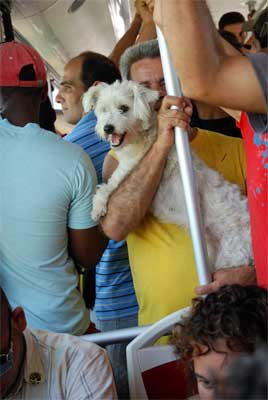 We are left reiterating the same proposed solutions that the state refuses to set in motion, and to a certain extent the workers themselves are applying in their own way.  Drivers are taking part of the bus fares to buy spare parts and pay mechanics and bus washers, as well as part for their personal benefit, of course.

In the absence of organized socialization, popular initiative and private capitalism are filling the void.

There were two basic proposals, which I am summarizing below but without repeating the detailed arguments:

2- “Eliminate the current restrictions on the issuing of licenses to individual carriers and lower the cost of licenses. Instead of trying to eliminate this type of worker through taxes and other administrative measures, the state should assist them by providing loans and discounts on the purchase of spare parts and accessories to those workers who are willing to form traditional cooperatives that also include mechanics, body work shops, flat tire repairers, and other related workers, with their own resources.”

Instead of what was suggested, permission was allowed only for issuing licenses to private carriers. What’s more, rather than encouraging them to form cooperatives, the government-state has encouraged those who have a lot of money to buy several vehicles and exploit workers. The chaos with regard to public transportation is well known and the fares for private taxis have increased.

We can recall that in the early years of the revolution when the imperialist blockade was tightened, workers sought out ways to repair vehicles through their own wits. Thousands of mechanics, lathe operators, milling machine operators and foundry workers took part in and supported this effort.

That enthusiasm, which was typical throughout all of the early revolutionary period, faded and was never replaced by the process of the socialization of ownership. This should have followed to achieve that so-called “sense of belonging,” which is now being called for but without changing the conditions of wage-labor exploitation employed by the state.

It could now be that reform czar Marino Murillo has been able to secure additional loans for spare parts and new buses on his recent visits to China and the Ukraine. When these arrive they will improve transportation but only to the point of reinitiating the cycle if state relations of wage-labor production are not changed.

In the meantime, workers and the population in general will continue to be blamed for the crisis and be made to carry the weight on their shoulders, while the bureaucracy — in their modern air-conditioned cars with white, green, blue, and yellow license plates — will continue demanding workplace and social discipline.

When the workers and the people get tired of supporting such disastrous situations and affronts, they won’t place the blame on “imperialism, its agents, counter-revolutionaries, instigators or anarchists.”

The real and sole ones responsible for the “destabilization of socialism in Cuba” are those who are reluctant to promote it, as they digress among neo-liberalist and neo-Stalinist approaches and frolic with the fire of national and foreign capitalism.