HAVANA TIMES — The tough guys in the neighborhood are the perfect oracles, the guides, the seers of today. They fill the night with their smoke and words loaded with double meanings or no meaning at all.

Havana has lost all its elegance. In fact, it’s like a bad neighborhood, getting by whichever way it can, like one of those women who are only interested in business. She’s like a woman with curlers, unkempt, gossiping in the middle of this huge tenement building where we all live.

The balconies of Centro Habana are anything but elegant. From these, people can hurl a Santeria spell or dump a bucket full of urine on top of you. You have to be wary, on the alert, apprehensive, because the tough guys see everything. They know the country inside out because they were born for these times.

To walk down Centro Habana is like taking a bus into a dark forest, to go deep into the jungle, run the risk of getting stranded, surrounded by threatening animals. So many vulgar words spoken, so many people looking at you as though you weren’t there, or shouldn’t be there – as though you did not exist. Retorting to an insult, shielding yourself from a shove in a crowded bus, playing the gentleman and resorting to ethical principles can all cost you dearly.

You can’t become one of them, play the tough guy, put on a show. You stand nothing to gain from putting on blaring music, not against those who were born to blaring music, those who know Havana like the palm of their hand, those who can drag you across the ground, step on you, beat the shit out of you.

Yes, they can fuck you up and leave you for dead, make you their bitch, because you don’t belong to the jungle, you’re not of that lineage that knows of urine flowing down the steps of the building, you don’t have the genuine smell of public bathrooms. No, you’re nothing and couldn’t be anything, not even if you tried and said you were turning your back on your hometown, that you were ready to become a fellow from Centro Habana through and through, not even if you smoke a joint and act tough and beat your chest. You’ll never be from the neighborhood. You’re destined to smell like shit, like a poor immigrant, all your life.

The guys from the neighborhood define everything. They are like sorcerers. They are blessed by vulgar but true cabbalas. They are the ones who survive, while you become diluted in that waterless sea that is Centro Habana, that sea of dilapidated walls, old ladies that will not die, gossip passed on from generation to generation, unbreakable and breakable people, broken people. 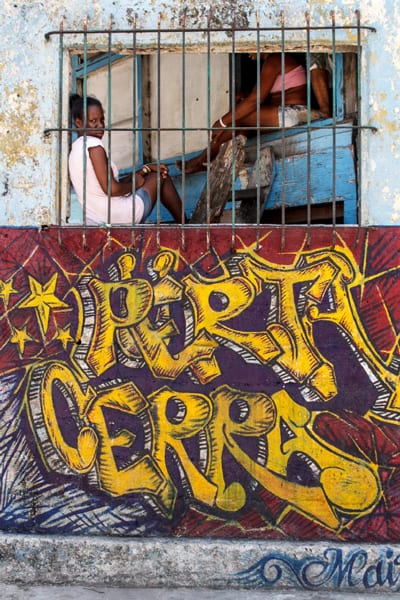 Havana is anything but elegant and yet looks elegant. A rowdy Havana, a Havana made of decaying walls, a Havana that becomes lost and is found again, a Havana that sells you a joint at three in the morning. You spit out the smoke and find it is not like the smoke in movies and you discover you’re not like the winner in those films, even though your life is like a bad movie.

A Havana made of immigrants, full of tough guys, where you’d want to be one of them, stand with them on a porch, some corner, sit down wearing shorts at three in the afternoon and talk about the lottery, the country, your bad luck, the good luck that only a few people have, about the Malecon ocean drive, about 1994, the neighbor, the situation (or, as they say, the “thing.”). Havana dissolved on you, a delirious and clear-minded old harpy, deceitful, angry, light.

The tough guys are right. Havana belongs to no one, stands no one, gives in to no one. You have to go out and look for it, rough it, until the ocean dries up. She is nobody’s girlfriend and nobody’s whore, she has no manners, nothing defines her, you can’t catch a true glimpse of it, she appears hazily in the Santeria cauldrons – no one can divine her, though many predict it. A Havana about to explode, a Havana about to sneeze and destroy the country, an unstable, screaming, whorish Havana riding on history, the altar of the Capitolio, home to illustrious rabble.

The tough guys are right. They possess her, leave her by the side of the road, throw her out as bait into the ocean. This is not Lezama Lima’s Havana, nor Cabrera Infante’s, nor Marti’s distant dream before a sea of rocks. This Havana is not the elegant bastion of Julian del Casal, where newspapers no longer speak of stoning and suicidal poets, where newspapers no longer even speak. 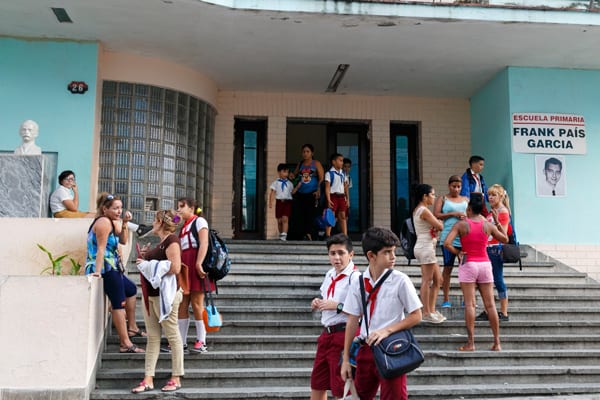 This is a Havana that suffers from Stockholm Syndrome, a Havanackholm, a Havana turned into cocaine dust, a brief Stockholm that alienates itself in a hot winter, with an artificial temperature, an old Caribbean rag sought by tourists in the midst of sumptuous copulation, orgiastic yelling down Reina street, where transvestites greet you, a coarse world, a mute world that does not cease to scream.

The tough guys are right, they are the seers, the elite, the survivors, the mack daddies, the ones who stayed, the bigwigs, the tough, they are and you feel you are not, never were and never will be. That’s the long and the short of it.

5 thoughts on “Havana Is No Longer So Elegant”