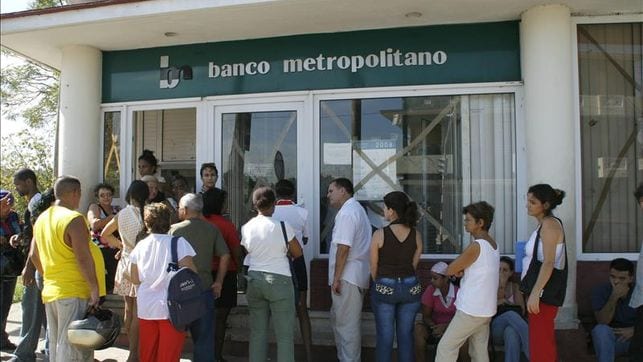 HAVANA TIMES — The crisis which shook the financial world about a decade ago (the repercussions of which we continue to feel to this very day) have been explained in many different ways. Many of these involve complicated terms such as financial derivatives, subprime lending, deflation or a lack of confidence in investments, but I would rather say that what happened happened because some multimillionaires wanted to make more millions by putting everybody else’s wellbeing on the line.

It doesn’t matter what legal framework you impose on large banks, they will always find a way to go around it, but if large financial institutions were more democratic, this wouldn’t happen. However, that’s not the case. Today, a privileged ruling elite are calling the shots and are comfortable knowing that the worse thing that can happen to them is that they only earn 150 million USD and not 300 million USD… this week.

I want a Social Bank in the Cuba I hope my children live in. Private banks are like any other business: profit oriented. A Social Bank would be oriented towards converting national savings into productive investments by financing businesspeople and companies, as well as managing the resources created by large socialized services companies which I discussed in my previous article. llllllllll

A Social Bank would use the branch offices, which are currently open and running all over the island today, as a base for its operations. My proposal is to transform every commercial bank across the country into one, a National Social Bank, where national reserves and profits of large socialized services companies are deposited, as well as private individual and company deposits.

Every employee and client would be considered a beneficiary owner and as such, they will elect the Governor and Regional Governors of Cuba’s National Bank, while having constant access to the bank’s general accounts and accounts of every branch office, not disclosing clients’ names of course, but names aren’t important when inspecting bank management, numbers are.

By using Information and Communication Technologies (ICT) and having transparent accounting processes which are readily available, fees to finance maintenance costs, credit policies and pay scales which are responsibility-dependent, can be agreed democratically.

The bank’s user/owners will contribute a great deal towards spreading a financial culture which they form a part of, something which is much-needed in order for the Cuban people to make conscious and responsible decisions, a safeguard against demagogy.

This will be the institution which also manages large socialized services companies’ accounts, knowing that a part of their earnings can be put toward productive investments and also divide contributions towards public accounts for research, healthcare or education. Of course, experts employed by the bank will present the different options available to managing the bank’s resources and will argue the pros and cons because the vast majority of us won’t know enough to do this, but we know enough in order to choose one option over another, democratically.

One of the bank’s main objectives will be to invest in loans to entrepreneurs and companies and the Social Bank will be banned from using its capital for real estate, financial or any other kind of speculation. Money should go where it is needed so that the resourceful can find the right springboard they need in order to start up their businesses or, alternatively, the security net they need in order to keep going. The stock markets of today’s world rarely serve this original function.

The bank would also provide services which modern banks normally provide to companies and private individuals, including debit cards. Credit cards will exist with well-defined rules on how to apply for them and use them.

The Social Bank will compete on the financial market with continuing assets from the private bank, the difference here being that their profits won’t become dividends for share-holders or bonuses for managers, but will instead be reinvested in the bank over and over again, making it more competitive when investing and capture savings.

By not converting profits into dividends, user/owners will be motivated to invest the bank’s resources into businesses which create social benefits, not just financial profits. Soft loans or even free credits to cooperatives, projects with great added environmental value or scientific investigations, just to give three examples.

The Social Bank will always respect the principle that a project is feasible when the goods it produces are what the market wants. We are the market, we are the ones who vote every day when we decide to buy something, therefore a company which isn’t profitable, will not be sustained by the bank won’t sustain in the long term, which is what the State does today with its planned economy and distorting consumers’ real needs.

As this is just a proposal, a guide to inspire your own models and your own solutions by criticizing the ones I’ve outlined here. We need to have a responsible mentality as social beings, as individual responsibility is the only guarantee we have to create a democracy which really works. And this is the Cuba I wish for, which might be something along the lines of the Cuba you wish for.

16 thoughts on “How a Social Bank in Cuba Might Function”