HAVANA TIMES, Jan 3 — No one should be mistaken. When something is affirmed by the second-rate intellectuals of the Cuban government, particularly those who don’t enjoy the protection of Writers and Artists Association (UNEAC) and the minister of Culture, it’s because they’ve heard it in some authorized setting.

Likewise, if they make these affirmations during tours of US universities — where they give their showers of liberalism for export — it’s definitely because someone told them what they would be allowed to say.

That’s why when I contrast the hemorrhaging of statements in support of immigration reform by artists, academics and former functionaries with what was just affirmed by Raul Castro at the last session of the National Assembly of People’s Power (parliament), I have no choice but to think that Raul’s updating actually has many limits. Among them may be this issue of immigration.

It always seemed to me to be a display of stupidity to think — as some of the academic spokespeople have suggested during their overseas tours — that the general/president would leave us breathless with his humanistic radicalism concerning this issue.

Nothing on the table

But I always believed — and on this I showed my own share of cretinism — that he could have put something on the table. That’s because the Cuban immigration scenario is so motley, oppressive, repressive and miserable that there’s plenty of room for moving around without touching the sensitive keys.

For example, he could have announced a reduction in fees, the extension of time for permitted stays on trips abroad, and the elimination of some medieval documents like the letter of invitation.

This, along with the release of 3,000 prisoners (a welcomed measure), could have permitted the reunification of many families that remain separated by provisions of Cuba’s immigration authorities.

But instead of any change, no matter how small, what Raul Castro gave us was the same tired verbiage justifying fifty years of internal repression due to the dispute with the United States.

On the one hand, he explained that nothing can be changed right now, because any movement threatens the “fate of the revolution and the nation.” Always taking into account “the exceptional circumstances in which Cuba lives under a siege that involves subversive political interference by the United States government, always on the lookout for any opportunity to achieve its known aims.”

Secondly, he reiterated his commitment to resolve this problem, though without defining the problem or saying how or when he would resolve it, let alone explaining how we can believe him when for five decades he has been one of the creators of Cuban immigration policy, a mechanism of unhappiness and oppression.

No easy way out

I reiterate that this issue will be particularly difficult to solve for Cuba’s leaders. Moreover, the disparity between spokespeople themselves, crying out for changes that never come, could indicate internal contradictions within the elite.

One part of them understand what must be “updated” as producing enough change to make better economic use of migration, which in the narrow vision of reformist technocrats means remittances, tourists and prospective investors).

Another part of them still cling to the old notions of making money off emigrants, which produces significant revenues for an economy in permanent crisis. This outlook sees there being only two types of emigrants: either objectionable counter-revolutionaries or good patriots who dance salsa, admire the flag and occasionally demand freedom for the five heroes.

But beyond economics, the way in which the Cuban government has handled the issue of immigration makes it a key part of its strategy of social and political domination.

For millions of islanders, travelling is an essential action – economically and spiritually. It is a means of earning the money to cope with the hardships of the island, visiting with families and friends, and finally breathing less asphyxiating air. It’s like this both for workers and intellectuals.

If Cubans, regardless of their present social status, could travel without asking permission, be free to decide the dates of their coming and going, and travel without having to pay for expensive consular services the Cuban government currently demands, this would be taking an important step in dismantling the authoritarian political system.

This is one step that probably few in the Palace of the Revolution (the executive government offices) would be willing to take.

But if at the same time they lifted all of the provisions that prevent emigrants from enjoying their legitimate rights as Cuban citizens (without this there is no immigration normalization), particularly the right to return, then this exclusionary and discriminatory political system would be signing its own death warrant. 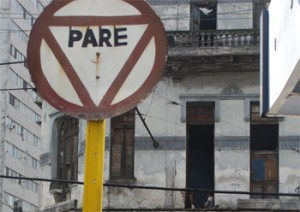 Surely this is not going to be done by the mercantilist technocrats or by the ideologically rigid bureaucrats.

The issue is very clear: Cuban immigration policy is a huge mechanism for expropriating the rights of Cubans. It is an instrument of repression, social coercion and fiscal abuses, which is true both for Cubans on the island and those who have emigrated.

The condition of kidnapped citizenship that is suffered by migrants is the perfect counterpart to the incomplete citizenship affecting the inhabitants of the island. It couldn’t be otherwise, simply because one and another condition are the results of a government that places itself over its citizens to manage their civil and political rights, which it confiscates, delegates and revokes according to the circumstances.

If Raul Castro is indeed seeking to normalize relations between the island community and those who emigrated, he must publicly state the dimensions and scope that he envisages.

He needs to set a timetable of gradual actions to be taken within a period not exceeding three years (before he leaves office) that will absolutely and unequivocally lead to the right of Cubans to freely leave and enter the country.

He must authorize opportunities for autonomous discussions and consultations among and between the insular and émigré communities. Of course I’m not talking about the so-called “Emigracion con la Nacion” (Emigrants with the Nation) conferences, those insipid meetings between pro-government emigrant minorities and immigration officials of that same government. In other words, those meetings that represent neither the nation nor its emigrants.

There will be no solution to this issue if Cuba’s authorities maintain their exclusionary policies, their Manichean perspective and their hypocritical ideological squeamishness, hiding their mean spiritedness behind threadbare clothing of what remains of the country for us.

All this is taking place under an abhorrent political system, an economy in ruins, a population that’s not growing and in a situation where many people are leaving, never to return.

(*) A Havana Times translation of the Spanish original posted by Cubaencuentro.

11 thoughts on “How Far Can Cuba’s Raul Castro go on Immigration?”