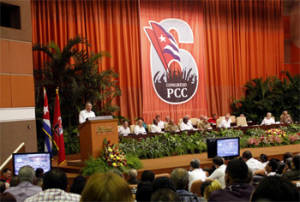 HAVANA TIMES, Mar 15 — It’s a good thing there are people who remind us that Cuba’s political system is organized in such a manner that there’s no need for parties, campaigning or money to win an election.

Yet others might argue that there’s only one political party in Cuba that has a chance of taking part in elections and therefore there’s no need for campaigning, political advertising or money.

But they’re making a serious mistake. The Communist Party of Cuba (or “the Party,” so as not to be redundant and to save on words) isn’t a traditional political party created for electoral purposes. Nor does it need to involve itself in elections.

When a specific political party is the “highest leading force over society and the state” — as established in Article 5 of our constitution — it needn’t present itself in elections. When that party is the entity that organizes and guides the efforts toward the goal of building socialism and progressing toward a communist society, it needn’t involve itself in electoral processes.

It’s true that many Cubans still have trust in the Party, and that those who have ceased trusting it for some time trust the unknown even less. But why take a risk?

Why allow Cubans who don’t feel represented by the Party to have the right to organize around another party? Why allow citizens who oppose the government to use the media to address the people?

But there exists one undeniable fact: the Party doesn’t propose candidates to the municipal, provincial or the national assembly, with this latter being the highest legislative branch of state power (the same state whose highest and leading power is the Party).

Any citizen can nominate a candidate or be nominated as a candidate to a legislative assembly, which constitutes the best sign of democracy in the world (according to some), or at least the amount of democracy to which we Cubans can aspire.

We can’t aspire to create a political party; we can’t aspire to freedom of speech or the press, except within the framework of socialism, but anyone can be elected to the National Assembly of Popular Power.

Personally, if tomorrow the opposition political parties, which already exist, were to receive legal recognition and there existed the freedom to create other parties, I would applaud such a circumstance because this would be acknowledging a legitimate right of citizens. And I would be exercising my legitimate right, as a citizen, to not belong to any of them.

But let’s face it, for the time being the only existing party in Cuba has no electoral role, unlike the traditional parties in other countries that spend outrageous sums of money and deploy an entire political apparatus to win elections.

In Cuba, it doesn’t matter to the Party who is elected to the municipal, provincial or national assembly (unless a constituency proposes a politically incorrect candidate).

Therefore all of us enjoy the right to vote. Because that is precisely what we do: vote. Choosing is a different matter.

By the way, who appointed our current president? The previous president.

We simply vote, not as an obligation but as a legitimate right. And since citizens are monitored to ensure that they exercise their rights, anyone who hasn’t exercised their right on voting day will be sought out at their home to make sure that they do

5 thoughts on “In Cuba, the Party Doesn’t Need Elections”