HAVANA TIMES — This story began when 500,000 surplus state sector jobs were to be eliminated, almost “putting the cart before the oxen”, and nobody knew where these unemployed workers would end up after receiving wages over a three month grace period.

At last, the “independent labor” solution came along and today there are over 400,000 people who make a living off of private work be it on their own or working for a small business owner. In spite of this kind of work having to suffer and still suffering a lot of prejudice.

President Raul Castro’s words at the National Assembly were the only thing to save them from a landscape where they are treated like counter-revolutionaries on more than one occasion. This prejudice is to be expected as it has been planted and endured for many years, after the so-called “Revolutionary Offensive (1968), when all private forms of work were done away with.” Only small farmers remained, grouped together under the ANAP (National Association of Small Farmers) and rental car drivers under the ANCHAR (National Association of Revolutionary Rental Drivers).

All of this within a great euphemism; because this independent or self-employed labor, isn’t independent in financial terms, and should rather be considered as small and medium-size companies, which is what they really are. But no, they continue to be called “the self-employed”, with all of the theoretical inconsistencies and social confusion that this creates.

They aren’t given the recognition that they already have as a part of our reality. Even though many people don’t like it, they are part of the solution to a series of problems that the State can’t nor should really take on and solve. They also offer wages that the State isn’t in a position to accept. As a result, incentives to work in this sector are more than obvious. A lot of people are leaving their state-sector jobs, even highly-qualified jobs, which are poorly paid, to work in the private sector.

How many skilled people can we find working as drivers, porters, restaurant employees, in cafes and other jobs, which are way below their real qualifications?

Why can’t we just consider them for what they really are, giving them legal recognition and a place within Cuba’s economic system?

To make things a little more complicated, let’s talk a little bit about non-agricultural cooperatives. These are small and medium-size companies, who are dedicated to non-agricultural activities, which include a series of production activities which expanded this so-called “independent” labor greatly.

So, we have created this problem ourselves; especially if we keep in mind how long it has taken to introduce a wholesale market, which is the root cause of why corruption is also flourishing with the growth of so-called “self-employment”. If the “self-employed” laborer doesn’t have the raw materials he/she needs, they will always find someone who is stealing them from state-owned warehouses and selling them. Therefore, the increase of state resources being diverted and thefts at state-owned warehouses is firstly the result of the authorities not having managed to organize private work. I think that we have to accept and recognize that private labor has come to stay and there’s no other way to take this in, but as part of our socialist economy.

With regard to what is happening with the new measures that have been put forward, we have to ask: Why have new licenses been suspended? Was it a necessary measure to reestablish order? Or what is really in the works behind this suspension? Especially, when we know that it has been a continuous “step forward, step back” when it comes to self-employment.

New controls and requirements to be able to work in the private sector are expected to appear, there’s no doubt about that. But, people are still concerned about how long this process is going to take, because there has been a history and regrettable and bothersome delays here in Cuba. This is why the mainstream concern about how long it will take the government to return things to normal.

Personally-speaking, I’m not worried about the State wanting to regulate so-called “self-employment” more strictly. We need to close all of the gaps that lead to illicit economic activities, which then affect the system’s model.

However, state officials and state-run bodies are the first ones who have to carry the blame for theft and embezzlement. Not the self-employed, who are only trying to survive within the framework of bureaucratic limitations that the government has imposed on them.

When we see that there are people who are capable of selling you anything and everything outside shopping center doors, you know that these have come from state-owned warehouses, and nobody seems to care. They don’t even come in parcels from Miami.

So, we need to apply pressure on the government first of all, and then we will see how everything else falls into the legal spectrum.

With private enterprises expanding, Cuban society had entered a dynamic where many people were making their own plans.

Plus, money was flowing in, mainly from abroad, and the country benefits from this, when, without officially receiving capital, it is receiving it via the simple flow of remittances which enter the country, and not only through Western Union centers, but also via so-called “mules”, who bring more money to families in Cuba than the government can account for. 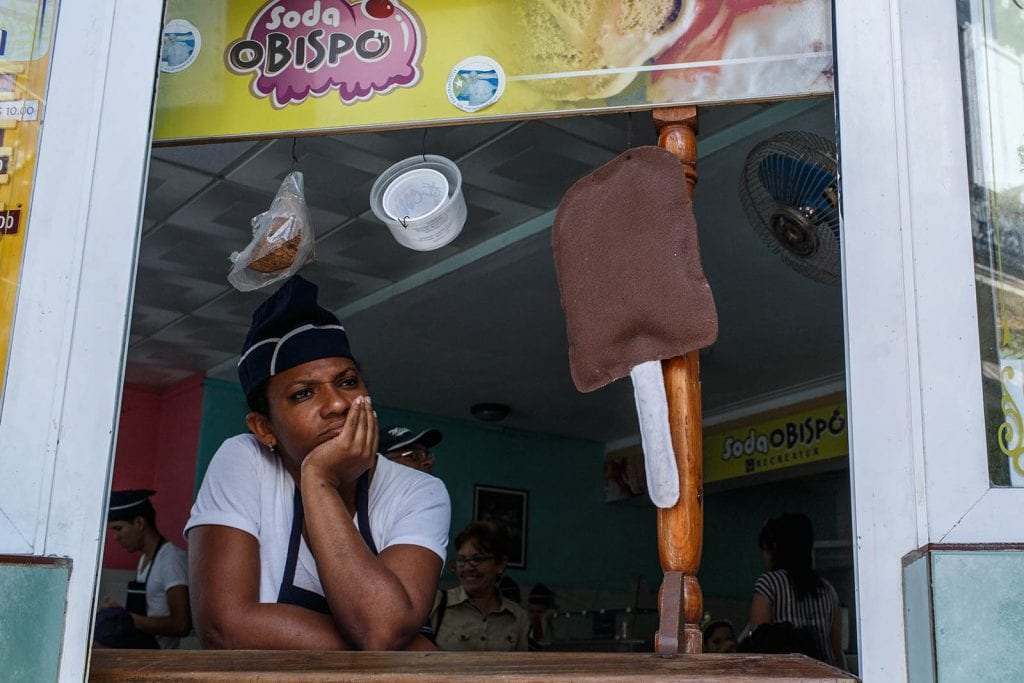 Are we going to lose out on or waste this influx of money that is coming in and being controlled, but is sometimes not controlled?

Even though we might not want it, nor can we control it, quite a bit of money is coming into Cuba. But, everything is going to end up in the same place ultimately: family investment, consumer spending and other expenses that many families have to improve their living conditions. To do so they pay carpenters, painters, mechanics, plumbers, etc. They go on holidays; they buy homes, cars and other assets. This makes money travel from hand to hand among the many people who don’t receive remittances, but do offer some kind of service or just sell things.

So, any obstacles we put in the way of small and medium-size private companies, fails to promote wealth distribution which favors the general population, benefitting the part which doesn’t receive remittances; which, as we know, are mainly received by intellectuals, the middle class, mainly whites with relatives abroad; because black Cubans emigrated too late, without support, like those who left during the Mariel Boatlift (1980) and arrived in the US when the best slices of pie had already been handed out.

They came when the US, the main recipient of Cuban emigres, was no longer the land of opportunities. As a result, black and mestizo Cubans in the US don’t have the best jobs, the best quality of life and the overwhelming majority does not have the opportunity to be able to travel back to Cuba, nor send parcels or money to their relatives on the island. Much less have the opportunity to send money so that black and mestizo Cubans in Cuba can rise up as owners of restaurants, cafes, and fix up their homes so they can rent them out and have a lucrative means to increase their quality of life.

Therefore, the measures adopted by the government also have a racial undertone which can’t be ignored. As such, these measures mainly affect builders, craftspeople, ordinary workers, black and mestizo workers first and foremost, who don’t have access to remittances as they hardly ever receive them, even though they do benefit from them, when these create jobs and service jobs in different areas.

Who have historically been builders, craftsmen and street sellers in Cuba? Blacks and mestizos, no? Work in the cities rescued them from plantations and slavery.

This social structure still hasn’t been significantly changed. While it’s true that there are many black doctors, professors, scientists, artists, writers, etc., many of them, more than we would want, sustain the masses of ordinary laborers, craftsmen, street sellers, garbage collectors and other modest and poorly paid jobs. We don’t have to go into too much detail to realize that the measure that has been adopted now to suspend new licenses to vegetable cart vendors, for example, will mainly affect black and mestizo people.

So, we must take into consideration the fact that our population isn’t homogenous and that the “skin color” variable continues to be a variable of social differentiation when we adopt any economic measure.

However, the story doesn’t end here; we still need to be very concerned about the trend that can be seen when jobs aren’t being given black and mestizo people at private cafes and restaurants which are mainly owned by white people. But, that’s another story, which we will deal with at a later date.

One thought on “Independent Work and the Racial Divide in Cuba”