HAVANA TIMES – I’m afraid to go to Old Havana.  Not because the police might ask for my I.D., or the Cubans might take me for a tourist, but because of the disabled, the lame and the mutilated who have begun to form part of the landscape all along Obispo street.

I’m not frightened of what they could do to me; I don’t see rage, or anger, or any desire to take revenge on the world in their eyes (at least, in the eyes of those who can see). What I fear is growing accustomed to them – that from seeing them so often and in the face of the great impossibility of ever doing anything for them, my soul will harden and stop hurting me.

More than fear, I feel shame: not for anything I’ve done, but for what I can’t do.

Some of you may remember Jorge Luis Moreira, my interview subject in “This Government Cares for its People Part 3”.  He was born with a congenital malformation that has caused him to live in a wheelchair and also to suffer from diabetes and incontinence.

But he’s not lying prostrate at home with his mouth open like a baby bird, waiting for someone to drop some food into it. That’s a luxury that not even the disabled can afford in this country.

I originally ran into him on Mercaderes St. He has a license to sell provisions from a cart, although now he can’t use it, and the products are expensive, he would have to go long distances to find them.  But he goes to Old Havana to sell newspapers, and in hopes that some tourist or other, pained by his situation, might decide to give him some money… 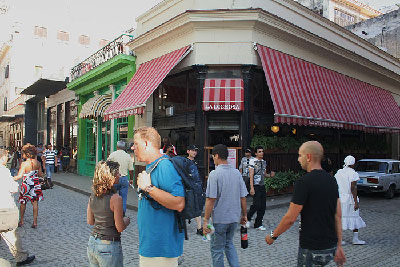 In that interview, Jorge told me that the police have detained him for bothering the tourists. It would have seemed unbelievable to me that any police official would arrest someone in his condition if I hadn’t been witness days previously to one of our agents of order and security taking away a one-legged man who used a wheelchair.

I saw Jorge again last week, once again on Mercaderes St. where I met him the first time and where I have run into him again a couple times. His life is the same: a pension of 135 pesos ($7 USD) which isn’t even enough to eat badly.

When a tourist comes up to give him money, the guides try to dissuade them, assuring them that our government gives those with disabilities everything they need, and that these people are begging (although Jorge is not a beggar) because they want to. When the police appear, those who don’t have a license to sell anything but do have a good pair of legs, manage to escape, and he’s the one they haul off.

What did I expect when I published his interview? What did he expect? What could change? I gave him 30 cents in hard currency that I had in my pocket, more to salve my conscience than to palliate his misery. At any rate, it was like offering an aspirin against a cancer. He wouldn’t be in any less misery for my thirty cents (about 6 pesos in national currency) nor have I been able to stop thinking about him since that afternoon.

Is it the government’s fault that Jorge was born with a congenital malformation? No, it would be only stupid to blame the government; there are people like Jorge, or worse off than Jorge, in all parts of the world.

The retired look for a way to sell plastic shopping bags or newspapers; they become messengers for the gas distribution agencies, or psychics who read the cards or the palms of your hands. They “struggle” as we say, and pay their taxes and their licenses – now that there’s a license for everything, including for letting yourself be photographed. What can Jorge and others like him do, except depend on others’ charity?

For years, our government promoted internationalism, solidarity aid for countries that had suffered a disaster, or where there were more basic necessities than in ours. Resources have been designated for these places, medical personnel and Cuban technical workers, educated under the umbrella of our state budgets, to alleviate the situation of people in other lands.

Why then impede these disabled Cubans from receiving the tourists’ solidarity or ours, their fellow citizens, since the government can’t cover all their necessities?

But could that be a solution, to have the disabled live by begging? And what if some brainiac decided to establish a license so that beggars had to pay taxes?

I keep feeling that something is wrong, that begging shouldn’t be the solution for these people. At the same time, if the cost of living in Cuba is such that the pensions they receive from the State are inadequate, what right is there to keep them from finding a way to make a living any way they can?

I haven’t heard of any person with a disability assaulting someone in broad daylight on Obispo St.  It’s hard for me to imagine a blind person or a person without legs grabbing someone’s wallet.

Jorge has been consumed with new worries since I interviewed him in February. He says that there are rumors that the State is going to turn all of its establishments for the sale of agricultural products over to the self-employed workers. (With the supply and demand situation this would mean higher consumer prices).

Here, people have learned from experience to give some credence to the rumors that spread around the streets, no matter how far-fetched they sound; especially if it’s about something that could make their situation worse.

Jorge wonders beforehand, and hopefully unnecessarily, how he’s going to eat if you can only buy agricultural products and meats from the self-employed workers. I can’t do anything more than look at him: powerless to help, ashamed and certain that the next time I run into him things won’t have gotten any better for him.