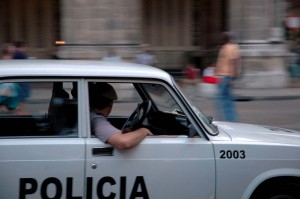 HAVANA TIMES, April 2 — Way back when I was in college, I remember a visit to the Fine Arts Center in Havana. I was surprised to see military weapons (anti-aircraft machine guns) positioned in the central courtyard of the museum.

When I finished my visit I looked all around, and since no one there, I wrote my opinion in the guestbook criticizing the presence of weapons at an art museum.

Shortly after I watched some guys read what I had wrote and comment to each other about what I had said. Of course I didn’t sign my name – I was afraid to.

This was one such occasion I remember having escaped the response of “my police,” that sense of a police presence that weighs on all of us Cubans. It’s what warns us when we’ve gone too far.

This law enforcer is often worse than the security agents in the flesh. This one doesn’t need to install hidden microphones or follow us or take notes about what we’re doing because it’s with us 24 hours a day. It’s very difficult to escape its supervision in everything we do.

Since I come from a Catholic family, as a child I remember my mother telling me to always have my guardian angel accompanying me. Later I realized that, thanks to the revolution, my guardian angel had been transformed into a repressive police presence that wouldn’t let me express myself.

It severely limited what I might say, and was somehow creating a disparity between what I thought and what I expressed.

So I obeyed it, for my own protection. If I would have expressed what I really thought, I wouldn’t have been able to study in college or get a job when I finished my studies.

My guardian angel had by then transformed into the police, the result of living in a totalitarian system of government in which people can see daily what happens to people who dare to speak out, criticize or contradict government figures or policies.

It was even worse when I started to comment on the internet. My police — which also accompanied me from Cuba and despite living in a free country like the Unites States of America — would not let me write my opinions with my name.

Back then I would sign my critical opinions under the name “Voz Silente” in Spanish and in English as “Silent Voice.”

Seeing how many Cubans from Cuba like Yoani Sanchez and other bloggers wrote and acted, signing their names to their views, I realized how I was still chained to my repressive police guardian when I signed with a pseudonym when writing my views on Cuba and its government.

So I decided to get rid of my guardian forever and start signing my opinions.

Today, I again have my guardian angel, but it’s not a policeman. It is a privilege now enjoyed by many Cubans inside and outside Cuba. It is the privilege to express what I think. I dream that one day this isn’t a privilege but a right of all Cubans.