HAVANA TIMES — It seems Havana’s garbage collection services have abandoned the tenants of multi-family apartment buildings in the neighborhood of Aldabo, Boyeros, to their own resources. Practically no garbage was collected in April and none has been picked up this month of May. This has left behind a veritable banquet for dumpster-divers and the many stray dogs that inhabit the area.

In the midst of this dreadful situation, the locals have shown an incredible degree of discipline, taking out their waste, in the most orderly fashion possible, to the area surrounding the overstuffed containers, which can no longer be approached because of the foul smell. Not even the 28 de enero primary school has been spared this deplorable state of affairs, evincing a garbage dump near its entrance that grows in size every day (where once there were a number of garbage containers).

The media is not adequately reporting on this very serious and well-known situation. Serious investigative journalism is required to explain to citizens the causes of this phenomenon and what measures the authorities have adopted or are thinking of adopting to confront it in a lasting fashion.

I am fully aware of the country’s economic difficulties, but nothing justifies neglecting this basic public service in this way. They should have already looked for a solution, as the health of people, including a large number of children, is at stake, part of a sanitary and public health situation where dengue, Chikungunya and other diseases co-exist.

Recently, Cuba made great and heroic efforts to combat Ebola in Africa. It also deployed a brigade to prevent epidemics in northern Chile after an earthquake there. Many Cubans have been instilled with a deeply-rooted sense of internationalist responsibility which makes us better human beings. But such efforts, to be legitimate and to enjoy all of the popular support they deserve, must begin at home. For the residents of Aldabo, it must begin with guaranteeing the collection of the garbage that surrounds us today. 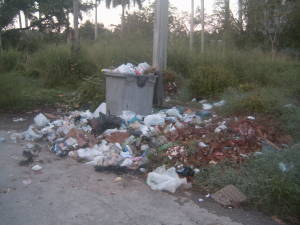 Garbage collection, in any city, goes well beyond sanitary issues. Its efficiency symbolically denotes the efficacy and efficiency of the government in question.

As such, the absence of this service produces a feeling of abandonment in citizens, a sense of irresponsibility and non-governability that has nefarious political and social consequences. If the local authorities lack the resources to confront this situation, higher levels of government should become involved – and quickly.
—–
(*) Roberto Miguel Yepe is a jurist who resides in Aldabo, Boyeros in Havana.

10 thoughts on “Living in Filth”