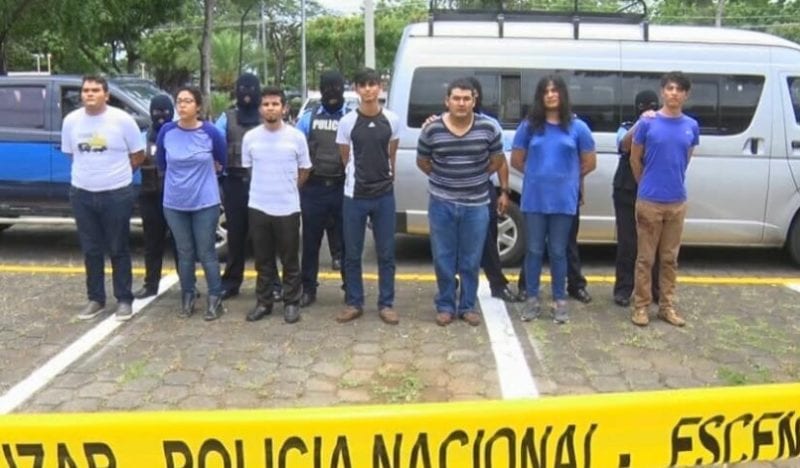 “Each gesture of solidarity among the families and the prisoners is also a way of resisting the isolation in which they’re kept.”

HAVANA TIMES – As 3 pm on December 31 approaches, a parade of family members files out of the meeting plaza at the El Modelo prison in Tipitapa: hundreds of relatives of the political prisoners are ending their New Year’s visit. The countenances are sad, the faces of the women bathed in tears. The children who are old enough to be aware are also crying.

A mother comes up to me with a child of about five in her arms. The child is crying unconsolably, and the mother says, “You tell him! Isn’t it true that his Dad has to stay because he’s working here?” I don’t know how to respond, so I merely nod my head.

Some of the prisoners are also crying. They’re putting handcuffs on them and loading them on the buses that will take them to Gallery 300, the maximum-security unit.

The women and children lead this parade out of the prison, since the men are frisked last. The procession now heads down a cobbled street that will take us to the prison’s outer gates. We’re carrying empty baskets and bags which held the food we brought. Some mothers come up to me and embrace me warmly.

At one moment, this parade seems like a demonstration to me, and I joke: “Since they won’t let us demonstrate in the streets anymore, finally we can yell in chorus the slogans that rise from our soul: ‘Freedom for the political prisoners’. Those around me laugh and share in the banter.

A mother in a wheelchair approaches me. Tobias Gadea’s daughter is pushing the chair, and she identifies herself to me. Her nephew is among the prisoners. I tell her: “Your father is a hero. He was fighting since before the name Daniel Ortega was even known.”  [Tobias Gadea Medina, now deceased, was a legendary guerrilla fighter and an early Sandinista.] “Yes,” she replies. “I remember that he was in the guerrilla struggle with Manuel Diaz y Sotelo and also in the Column known as ‘September 15’ with Julio Alonso Leclaire.”

The special visit allowed previously authorized family members to arrive, beginning at 10 am, with food baskets to share with their imprisoned family members. This was done at tables placed under canopies. One family per table. Communication between tables was forbidden. While loud music played, the officials were attentive; there was increased vigilance at some of the tables.

Upon entering with my sisters and sister-in-law, the first person I see is Colonel Carlos Brenes. He’s being closely watched, so all I can do is shout at him: “Carlos, I love you! We admire you. Strength!” while miming a hug. When we arrive at the table assigned to us, I can’t stop looking at Victor Diaz, the farm leader from the community of El Fajardo in San Miguelito. I know him very well, because my daughter brought him to our house on several occasions. He was part of the leadership of the Rural Movement for the Defense of the Land, Lake and Sovereignty.

Without thinking, I go directly up to him and cover him with kisses, while I tell him that Nicaragua will soon be free, that they must resist. Later, we exchange food – he brings us fresh corn pudding that his family members have brought him from the farm, and we hand the dish back filled with fresh fruit salad.

Each gesture of solidarity between the family members and the prisoners is also a way of fighting the isolation in which they’re kept, especially the prisoners that we’re seeing today face to face. Among them are Medardo Mairena, Lenner Fonseca, Jonh Amort, with his grey hair, and more than a hundred other political prisoners. Nardo Sequeira is on one side of us, amazing us with his calm, secure smile. He gives us rosquillas [a biscuit made of corn and farm cheese], and we share our fruit.

Before going in for the visit, we had to wait through an exhaustive inspection of everything being carried and of our persons. We also had to obey some absurd orders, that all of us follow, although in many cases amid protests.

That’s where I encountered Myriam Perez Amador, one of the heroines of the Esteli insurrection, whose testimony I had included in the book Memorias de la Lucha Sandinista [“Memories of the Sandinista Struggle”]. I’m surprised to see her, since up until a short time ago she had been giving declarations in favor of the regime.

But now Myriam tells me that her brother was jailed in July, and after that her two nephews. There are now a total of three prisoners in her family. With a little research I later read that the young people from Esteli were arrested in September, in the El Rosario neighborhood, at a time when the roadblocks were gone and they were heading to a demonstration for freedom and democracy. Among them were Kevin, 24, Kitzel, 22, and Tobias Gadea,19, the grandson of the hero I was talking about.

“Maria Libertad”, unquestionably a Sandinista, now has no doubts about the unjust prison terms that Nicaraguans are suffering: she’s suffering it in her own flesh. My brother Ricardo tells me later that, according to his calculations, some 70% of those imprisoned come from Sandinista roots, and probably the same thing is true of the murdered. That’s not really strange, according to my thinking, because true Sandinismo taught us to fight against injustices, and nothing is more unjust and criminal than the regime of Ortega and Murillo, that we’re still enduring.

All through the visit, while we talk non-stop with our brother, I look around at the different tables. At many, there are children of different ages, including babies and newborns that surely came into the world while their fathers were already unjustly imprisoned.

There are women who look tired. As they explained to me, some have been traveling since the day before, since the regime has ordered that all the trials be in Managua, instead of in the jurisdiction of the accused as the laws stipulate. As a result, entire families are really suffering a tortuous situation.

From the time a prisoner enters El Chipote, the mothers have to bring them their three meals a day. Many had to spend the night in the Managua Cathedral, while support committees were organized for others. Those of us from the Popul Na Foundation offered bed and lodging to mothers who came from far away, like Victor Diaz’ mother.

But in addition to the regime’s persecution of the committees, the mothers who arrive at El Chipote, are harassed by groups located at the entrances of the jail, the same entrances where they evicted the mothers of the prisoners who were spending the night there.

When the prisoner is transferred to the facility called La Modelo, the frequency of the visits changes. Now, depending on the gallery where the prisoner is located, the visit might be weekly, bimonthly or monthly. For those detained in Gallery 300, it’s a monthly visit. Those in this gallery suffer a brutal isolation, remaining under a permanent punishment regimen. This involves cells that are completely closed, with no light entering. Until a short time ago, they would hang some bulbs, but the asphyxiating heat of the bare bulbs themselves was uncomfortable. These prisoners never receive sunlight, and their skin already reflects this.

I examine my brother, who has now been there for over 100 days. His skin is transparent, his hands look black and blue, and the veins stand out clearly, because the skin is so thin. He can’t write, he has no access to books. No distractions. They spend 24 hours in a brutal lockdown. These indecent abuses and punishment of the prisoners are direct orders from the presidency.

On this morning of December 31, the prisoners of Gallery 16 and their family members were located in a roofed hall next to the meeting plaza where we were sitting. Those of Gallery 16 dared to stand up, and that’s when I spy Jonathan and Hansel, two of the student protest leaders. I intentionally go to the restroom, so as to pass by and hug them on my way.

There are advantages and disadvantages to being in these galleries. The advantage is that these prisoners can walk around a larger area, shared between political and common prisoners. However, there are more than 100 prisoners in the gallery. This makes for suffocating crowding and also some dangers, as could be imagined.

However, the family members explain to me that the common prisoners respect the political ones. The youngest political prisoners are concentrated in that gallery, although in Gallery 300 there are also young people like Yubrank Suazo, who we also give a hug to, and Edwin Carcache, who we couldn’t see, since he wasn’t scheduled for a visit until January first.

The young people who were visible from our table could be identified from the photos that we’ve seen in the newspapers or on TV, but there are many more youth than those shown in the grotesque photos that the regime publishes. Looking at so many imprisoned young people puts a needle through my soul: as I repeat, all are being punished for exercising their right to protest and rebel against the system.

The hour of separation is drawing near. The first to be taken away is Carlos Brenes. I don’t get to see his departure, but later Medardo is taken, and while he’s walking, I shout out to him: Goodbye, Medardo, Be strong, Medardo!!” My shout resonates through the entire area, and then other people also shout and begin to applaud. Medardo looks at us, feels the tribute and smiles, raising a fist. People applaud and bang the table as if it were a drum. The guards move nervously.

The parade of family members begins again – with tears in their eyes. I cry, too, but I’m not leaving saddened. I feel that the freedom of the political prisoners will be the main motor driving the struggles of the new year that’s beginning: 2019, year of the liberation.