HAVANA TIMES —Recently, Cuban-born political analyst Carlos Alberto Montaner published an article titled Education and Cynicism. The article aims to discredit Chile’s student movement and its calls for the de-commercialization of education, not by analyzing the political coordinates of the phenomenon (something which would have proven immensely interesting), but from a moralistic and dogmatically neo-liberal perspective.

These views are what make Montaner dismiss the efforts of the students – and, it stands to reason, those of the immense majority of Chileans, who support them -, whom he considers something along the lines of “slobs who want someone else to pay for their education.”

The implementation of neo-liberal doctrine has not only wreaked social havoc and resulted in immense frustration and misery, it has also been prompted by such phenomena. This is quite simply because its postulates can only be fully applied through repression and on the basis of social inaction, something which Chile’s Pinochet regime – which murdered, disappeared and tortured thousands of people – tragically illustrated.

That said, reading Human Action or The Road to Serfdom can be intellectually exhilarating and persuade us that there are some ideas we should pay attention to in a theoretical proposal that identifies the market as society’s organizing principle. As is the case with other theoretical corpuses, however, the neo-liberal argument is completely devalued when it falls in the hands of proponents who are less enlightened than the founding fathers.

A case in point is Montaner, who also has a tendency to comment on things he knows little about, distort information, offend his political adversaries and turn his ideology into a kind of fanatical creed. His remarks about the Chilean students today echo those he once voiced in connection with the Latin American Left (which has no few, brilliant representatives in the continent), whom he called “the perfect idiots.”

An example of this tendency is how he describes Chile’s student protests as a string of vandalistic actions instigated by infiltrated minorities. In fact, since it was sparked off in 2011, the movement has had very low incidences of vandalism, among other reasons because the students themselves took care to control such undesirable situations, caused by the extremist groups Montaner mentions and government agents infiltrated among the protesters, a fact Montaner omits.

In the interests of the brevity demanded by an article of this nature, I will focus attention on two key points touched on by Montaner’s article: 1) the analysis of the student movement and 2) the conception of education.

When Montaner describes the situation as a student protest demanding free education, he is guilty of a rather regrettable distortion of the facts. Not because Chilean students aren’t asking for free education. They are, as they also aspire to a better financial situation in which they can afford to study. This, however, is an iconic position, so to speak, for the students know they are only a piece in a game of negotiations and that, ultimately, what they are doing is helping de-commercialize education in the country.

In this, they are in agreement with the immense majority of the population and with a significant part of Chile’s political class – to the point that no one who aspires to a measure of credibility in Chile would be so reckless as to repeat the simplistic remarks afforded us by Montaner. Many people, including myself, believe, on the contrary, that education constitutes a right and that universal access to free education is a legitimate and positive social aspiration.

What the students are protesting against is not simply expensive tuitions. They are also rallying against a backwards, planet-wide tax-system that today rests on the shoulders of the underprivileged and the middle class.

If this tax system became more equitable, and placed a heavier fiscal burden on the 1 percent of the population that reaps 30 percent of overall profits, then poor workers wouldn’t be the ones shouldering the bulk of public education – it would be, rather, the handful of wealthy Chileans who live on the eastern end of the capital.

In short, Chile’s civil and student movements have placed a whole range of neo-liberal excesses on the public agenda, issues which Michelle Bachelet, who will likely enter office next year, has pledged to address.

The other point I wish to consider has to do with the way in which Montaner conceives of “profit” in connection with the university as an institution. Here, we will not focus on how he compares education to the services offered by a restaurant, a comment which, as Marx would say, is not even worthy of critique, and which I will consider a mere jocular aside by the author.

Nor will I comment of Montaner’s claim that the Platonic school or Aristotelian lyceum were for profit institutions, a remark which only reveals to us that Greco-Latin culture is not one of the author’s strengths (and this is irrelevant to what we are discussing). 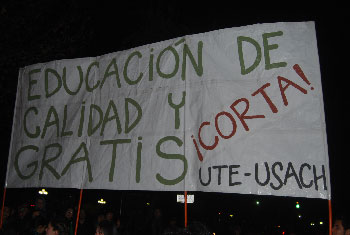 I will say, however, that Montaner does not understand what “profit” actually is, nor what a “non-profit organization” means in legal terms, and that he does not know how to differentiate between the public and the private.

Let us examine this point more closely. There are numerous universities in Chile. Some of these are run by the State and others are not. To the dismay of neo-liberals, the best and most demanding are the State universities, the University of Chile in particular, just as the best university in Mexico is UNAM, the best in Puerto Rico is the UPR, in Argentina the UBA and in Brazil the USP.

There are other non-State universities, some of which offer high-quality programs, have public prestige and are non-profit institutions. Well-known examples of these are the Catholic, Alberto Hurtado and Diego Portales universities. Very few people in Chile question the existence of these universities or the quality of the education they offer, even though they are not State-run.

This isn’t even a topic of discussion because these universities aren’t breaking the law, for, as Montaner surely knows, Chilean law stipulates that universities – whether public or private – are “non-profit organizations.” What this means is quite simple: the surplus generated by these institutions cannot be “withdrawn”, that is, used for ends that aren’t related to those of the institution as such.

What’s being discussed, first and foremost, is the existence of a myriad of private universities that break Chilean law and operate as profit organizations, while offering the worst-ranked education in the country – illegal universities which, like Montaner, are apparently unaware of the far from subtle difference between a neighborhood pub and a university.

The students aren’t exclusively concerned with the legal meaning of the word “profit”, of course. They aren’t merely complaining that, for instance, the owner of a University like SEK pays for publicity at the stadium of a soccer team which he also owns, skirting the prohibition on profit mentioned above.

What the students are demanding is the restoration of all levels of an educational system where competition, the search for profits and savage market deregulation aren’t the governing principles.

Though Montaner’s concern for the “average working stiff” is quite touching (and speaks of a sensitivity uncommon among neo-liberals), we should point out that, in connection with the matter that concerns us, paying higher education tuitions often plunges these working people into unsustainable debt, forcing them to mortgage their lives and professions just to be able to send their kids to university, in the hopes they will have a better future.

If the question is whether education can be governed by market laws, Chile’s experience in the last 30 years or more has clearly shown that it cannot. Chile’s market is irrational, far too extended and exclusive, burdened by absurd tariffs which exceed the average for Latin America. What is curious about these student protests, in fact, is not their magnitude, but the fact they didn’t happen sooner.

It is a shame that Carlos Alberto Montaner, a talented man and able writer, does not understand that education, like health, is a right, not a commercial service. This is something that Chileans have, luckily, come to understand, and what they are now betting on. It is, at least, what Chile’s students and most of Chilean society has been demanding with these magnificent protests that demand a better world, where human dignity is no longer assessed through petty costs-benefits calculations.
—–

(*) An authorized translation of the original published in Spanish by Cubaencuentro.com.

One thought on “Montaner on Chile: Ignorance and Cynicism”