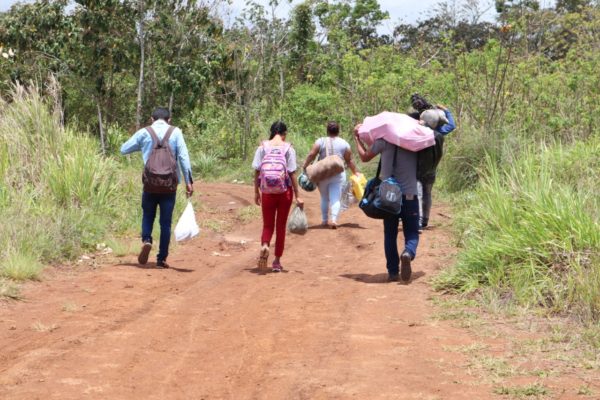 HAVANA TIMES – I’m a Nicaraguan journalist and migrant. I left my country at 26 years old for personal reasons and I settled in neighboring Costa Rica, a country I knew little about, despite it being so close, and of which I had heard, above all, negative comments related to political and border differences between governments, and about xenophobia against the tens of thousands of Nicaraguans who come here looking for work.

I moved in 2015 with my now husband, also a foreigner, and began to get to know my new reality, admiring the many natural charms of a green country and the functioning of one of the most solid democracies of the continent. Also, learning about the use of “Pura Vida”, immersing myself in the Tico culture, and learning about the space occupied by my community: the Nicaraguan, the largest foreign population in Costa Rica.

I have been in this country for six years now, and I can say that the welcome from most Costa Ricans has been friendly, warm and sincere. During this time, I realized that the supposed enmity between Ticos and Nicas was instigated by the politicking of a few and that in reality, there were strong, longstanding ties and mutually beneficial ties. There was respect and brotherhood between the two peoples.

But this is not always the case. Any Nicaraguan who has noticed a change in the way someone treats them when they hear their accent, who has read hurtful comments about Nicaraguans on social media or has received an insult because of their country of origin knows this.

When I arrived in this country, what caught my attention as a journalist was that even though Nicaraguans were in many spaces, as an essential presence, in essential jobs for the Costa Rican economy, as family members, as friends or as colleagues, our presence in the local media was very limited.

I also noticed that we were almost always portrayed in an anecdotal and sometimes stereotypical way. It was not unusual to hear comments such as “you don’t look Nicaraguan”, “you don’t speak like a Nicaraguan”, as if Nicaraguans were homogenous, like that stereotype often reflected in the news.

The migrant Nicaraguan community, which represents more than 10% of the population, which according to some statistics is composed of more than 800,000 people, and that contributes more than 15% of the gross domestic product in remittances, is more than relevant and continues to be part of Nicaragua.

We are not an anecdote, an event, a stereotype, a problem or the crisis of the moment. We are a diverse population, with challenges and necessities, resilient, that succeeds, and contributes to Nicaragua and to the country that we arrive in. We are citizens, with ideas, proposals and opinions, and we create debate and influence how we improve our realities, but also that of our country of origin.

This is how the hundreds of thousands of Nicaraguans who left decades ago feel, those who left some years ago, and more and more Nicaraguans who have been forced to leave in recent years, as a result of the serious socio-political and economic crisis that has afflicted Nicaragua since 2018, when the Ortega Murillo regime began to shed any modesty to end up becoming a dictatorship that kills, imprisons, persecutes and silences anyone who dares to dissent.

Among those people are dozens of colleagues that because of their work as journalists have suffered persecution and smear campaigns, like our director Carlos F. Chamorro, who has had to go into exile from Nicaragua twice. Thus, amid migration and experiences of exile, we found ourselves in Costa Rica, from where a part of the CONFIDENCIAL team now works.

We have been portraying Nicaraguan Migrants for almost two years now, through reports, journalistic articles and interviews which you have probably read. You have also seen us talking about the reasons why Nicaraguans leave their country, providing a space for them to share their difficulties, challenges and triumphs.

I have always heard that journalism is the instrument to reveal the hidden. It’s a phrase that I have always associated with great investigations, but has acquired a new dimension when I see how, little by little, with every story, at CONFIDENCIAL, we give a voice to a population that has always been there, but which we have not been listened to and attended to enough. We believe that must change.

Because of this and many other reasons, we have decided to launch Nicas Migrantes, a permanent journalistic product for and about the Nicaraguan community abroad. As of Monday September 20th, our microsite will be available inside confidencial.com.ni, and it will be a space where Nicaraguans abroad will be informed with verified and contextualized news about what happens in Nicaragua.

In addition, you will be able to find human interest stories, figures, analysis, useful information and even content for nostalgia. With Nicas Migrantes, we want to be the bridge between our audiences in Nicaragua and Nicaraguans in Costa Rica, Europe, the United States and around the world.

We are and will continue to be a country of migrants, that is why we deserve a permanent place in the media agenda so that we no longer divide ourselves between “those who left” and “those who stayed” but rather see ourselves as those who share roots, belonging and identity, and want a better Nicaragua.