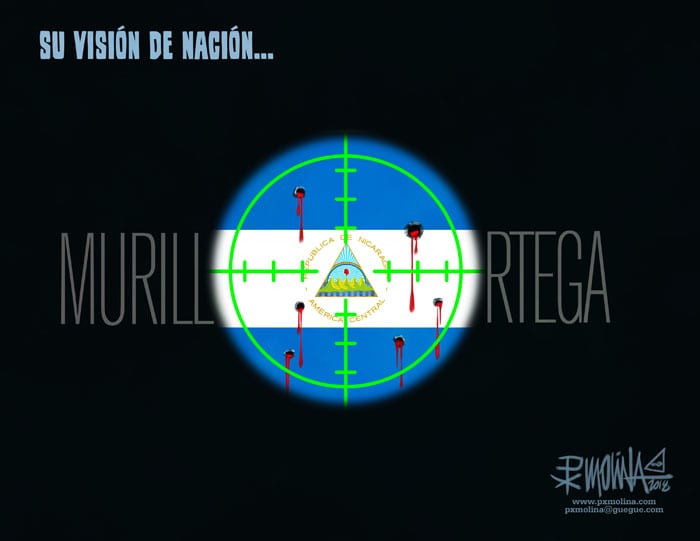 HAVANA TIMES – The country is at the mercy of currents and winds, without any government. And, the lack of a course is leading us to a disaster in a hurricane-type environment. Worse yet, it is going adrift with a maniac who, armed to the teeth, prevents anyone from reaching the helm or throwing the anchor, and desperately breaks the official compass that informed the data from the Central Bank. An unthinkable option for all is to abandon the country that is going adrift.

In the hands of a madman without control

Against “Somoza” the people enthusiastically undertook an immense demolition task. An engineering project at a high human cost. It was a planned and historical work, such as opening the Culebra massif for the Panama Canal. Now, the country is drifting. We have simply left our fate in the hands of a madman who commits new crimes daily.

It seems paradoxical that an extraordinarily discretionary and absolutist state, a State under a ridiculous level of personal control, like Orteguismo, suddenly disappears as a form of real government when the crisis in increasing severity demands the capacity to be managed effectively: political definition, coherence, decision-making in methodical priorities, capacity for political negotiation, precise contact with reality, foresight, and multidisciplinary professionalism.

In short, the developing crisis, as it always occurs, brings to light in a dazzling way the flaws of those who are at the front of a project, when the facts fail to sustain the vain words, the lack of critical thinking, and show a piece of buffoonery in a court full of tackiness.

The State, in the current social upheaval, is reduced to a mafia organization outside the concept of law and confronts the crisis with crime. This occurs not only because of evilness or dementia, but also because of a lack of intellectual resources for direction and cognitive dissonance, which would explain neurologically the immoral acts committed by Orteguismo in the prisons, psychologically appeased by the unreal justification of intervention and fabrication of prejudices (converted into discriminatory laws against non-Orteguista citizens). Whoever is not a Ortega supporter, is not a Nicaraguan. The Ortega supporters are land owners, the rest are trespassers.

No dialogue with Ortega, put him aside

The most important observation at the moment, provided by the economy, is that Ortega shows ad nauseam that he is not up to the circumstances, and that he must be dismissed urgently from the government position he holds. As is done with a bad administrator of any company with a minimum of response that, additionally, should lead him to respond legally for his awful management. Not only for his crimes, but also for the absolute incapacity in decision-making.

In none of his speeches or interviews is there a single analysis of the reality perceived by general information, or even a single attempt to resolve the problems of the country, caused by him as a despot. Rather, he threatens and increasingly violates the human rights of Nicaraguan citizens. This is a model that theoretically generates crisis, which makes it unsustainable. Ortega lies, but he does not know how to lie, because to lie skillfully is an intelligent activity. Ortega’s prejudices against the blue and white pro-freedom citizenry eliminates him as a national ruler, and makes him a gang leader.

Clandestinity is a form of war. But, war is more difficult because it is based on deception. Ortega’s war is a massacre because a limited brain only deceives itself.

A provisional government of the people in rebellion

Before the ship capsizes, the country must appoint immediately a Provisional Government of the rebellion, which must dialogue with the army (not because it is progressive, but because the military are guilty by action or omission in the current disaster). And, the international community should recognize as a belligerent force the new provisional government, to take negotiated steps towards an urgent legal transition that will effectively dismantle the appalling Orteguista model, even its most violent proletarian expressions.

It is stupid to believe that it is strategic to dialogue with an armed maniac that does not govern. The logical thing is to throw him overboard. So, any discussion about a dialogue with Ortega, with the Central American Integration System (SICA) or with any organization has lost meaning in the sense that Ortega has shown that he commands, but does not longer govern, because he lacks political capacity.

The provisional government, once recognized as a belligerent force by the international community, tired of dealing with a maniac without political capacity, will be able to take the necessary steps, urgent steps for a legal departure of the terrorist Ortega regime.

This is not about knocking down the horse to bring Ortega down from power, considering Ortega’s obstinacy. The logical thing is to build an alternative to power, whose legitimacy comes from the exceptionality foreseen in all the Constitutions in the world when a tyranny is challenged, and the overwhelming majority of people rebels against the growing crime that has a high humanitarian cost.

An alternative to power, early elections

The Provisional Government will request executive submission to the current army, to avoid worse consequences. Because the strategic course leads inevitably to profound changes to reduce the army, which has feigned neutrality regarding the genocide.

Not the blue and white unity coalition (multi-colored and bureaucratized, with an old traditional leadership who decide by consensus), but a Provisional Government that will create disciplined emergency ministries, with specific provisional tasks to counteract the anarchical efforts of an Ortega regime at war. Control over medications and hospitals. Create a defense ministry that will organize self-defense militias, with weapons provided by the international community. A reorganization of a new police force that neutralizes the armed Ortega order, capturing torturers, jailers, informers and snitches in neighborhoods. Create a fund for food and legal assistance, with international loans and private sector contributions to the provisional government, to safeguard the citizens detained in Ortega’s dungeons. Order the army not to capture any Nicaraguan who wishes to seek provisional refuge in a neighboring country, and to proceed immediately to release from prison all the arrested patriots.

A provisional government and a Constituent Assembly

The mission of a provisional government is to duly organize, with an internationally agreed procedure and with internal and external supervision, early general and municipal elections. The newly elected government, in addition to completing the dismantling of the entire Ortega apparatus, especially the paramilitaries, so they pay for their crimes, must organize a Constituent Assembly that will democratically discuss the re-founding of the nation, under a new legal order, in a free ideological debate.

A Constituent Assembly with full ideological and party freedom and with the projection of social programs (except the Ortega regime officials) must be organized immediately by the elected government. If this doesn’t take place, instead of re-founding a new legal order in the country, an order will be imposed empowering the de facto powers constituted (oligarchy, army, corruption), repeating the perverse cycle of corruption and antinational authoritarianism.

*The author is an electrical engineer.

7 thoughts on “Nicaragua Is Drifting Towards Ruin”