This would mean that at the rhythm we’re moving in Nicaragua, according to the WEF, we’ll soon catch up with countries like Iceland, Norway and Switzerland, currently in first, second and third places respectively. But – how can this be possible in a Nicaragua struggling under a dictatorship?

Simple. The rankings are determined by a sub-index of four separate areas: economic participation, educational success, health and survival, and political empowerment. These are precisely the areas where Vice President Rosario Murillo has managed to slap some heavy make-up over the statistics – as much or more than she uses on herself. 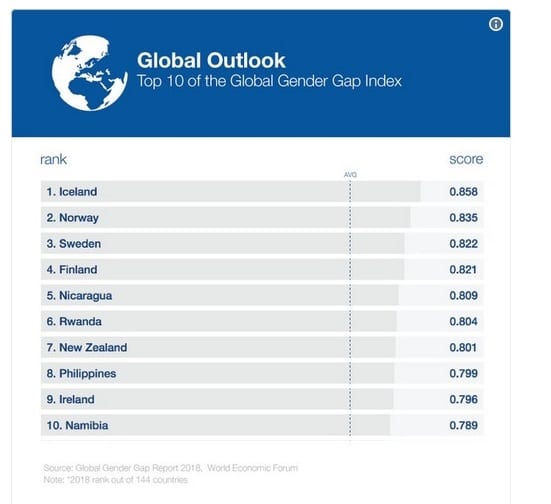 Based on data from the Nicaraguan Central Bank, the Economic Commission for Latin America and the Caribbean (Cepal) affirms that 48% of Nicaraguan women over 15 participate in the country’s economic activity, according to their statistical yearbook for 2017.

However – what work are those women doing? The majority of women work in the commercial sector: they sell fried foods; they work in grocery stores; they’re peddlers, maids, merchants; they work in the free trade zones, in agriculture, etc. These are areas where they’ll never have the opportunity to access credit. As such, they won’t be able to aspire to buy a small parcel of land to produce, or dream of owning a house.

In November, Murillo reported that in four days of school enrollment, a total of 731,853 boys, girls and teens had signed up for the 2019 school year. However, for years we’ve not known the level of school retention, absenteeism, dropouts or how the battle for a universal sixth grade education was going.

In fact, although I search high and low to find statistics to offer regarding women’s access to education, I can’t find any.

If we speak of health, I can only recall Murillo’s monologue on [her Party’s] Channel 4, offering data regarding maternal deaths. She continues to minimize these, because she doesn’t tell you that the quantity of 71 deaths for every 100,000 births is one of the highest in the region. She tells you about the Casa Maternas (homes which shelter rural mothers about to give birth) where they glorify the maternity of 12-year-old girls who have been victims of rape or incest.

Those same girls don’t have the right to a therapeutic abortion due to the fact that in 2006, during the electoral campaign, Ortega forged an alliance with the Catholic and Protestant churches and promoted the criminalization of abortion, even in cases where the life of the mother is at risk.

It’s also relevant to mention the 2014 decree that truncated Law 779 (The Integral Law against Violence towards Women). This reduced the crime of femicide to the private sphere and created “family counseling offices,” as the first response to cases of violence. Later came the disappearance of the Police Commissions for Women, Children and Adolescents.

For that reason, although annually between 60 and 70 femicides are registered according to the women’s organizations, Murillo can come out saying that they’ve eliminated violence, reduced the level of maternal deaths, and all the other evil that affect the life of women in Nicaragua.

In 2012, Law 50/50 was passed, supposedly to guarantee parity in the exercise of municipal power and to promote a greater presence of women in the legislature. However, the government never had a real will to promote gender equality in Nicaragua, and although each municipality has a female Deputy Mayor, this doesn’t mean that the woman in that position commands any real power.

We shouldn’t forget Daysi Torres and Reyna Rueda, who don’t get past carrying saint’s images and cutting ribbons while Fidel Moreno, General Secretary at Managua’s City Hall, makes the important decisions. And let’s consider the National Assembly deputies: the only female opposition deputy that speaks up is Maria Fernanda Flores de Aleman, but her posture has been that of a love-hate relationship with the dictatorship.

A mockery of women

This kind of report is nothing but a mockery of women. In Nicaragua last year we registered 57 women activists in jail, 56 who had to leave the country and 70 who are hiding in “safe houses”. Thousands of women can’t go out on the streets to exercise their individual rights, or even their collective ones.

Others can’t see their sons or daughters who are in jail; some don’t even know where they are; some have had to go into exile. So now, in addition to all the fallout from the peaceful insurrection of April 2018, we must carry the accounts of the capitalist and extraction-minded left that in Davos only responds to a body of world capitalism. Because for all their talk of “pueblo presidente” (presidency of the people), what matters to them are the numbers in dollars, not the lives.

6 thoughts on “Nicaragua – the Best Country for Women?”