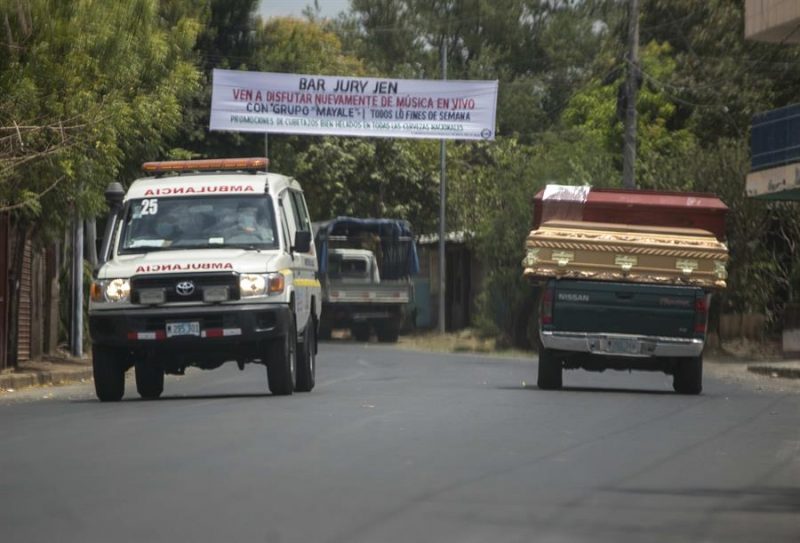 HAVANA TIMES – After seven days of official silence on the coronavirus pandemic in Nicaragua, on May 12th the Ministry of Health issued a brief report in which it registers 25 positive cases and 8 deaths. In contrast, the independent Citizens Observatory counts 1,033 suspected Covid-19 cases and 188 deceased of “atypical pneumonia”, who were treated in hospitals as Covid-19 patients and buried through an express procedure.

While the number of deceased increases and most hospitals in the country begin to fill with suspected Covid-19 patients, including many doctors and health personnel, the Ministry of Health discontinued, without providing any explanation, the daily reports in which they divulged very brief and confusing information on the progress of the epidemic.

Unlike other countries in the region, the order from the El Carmen bunker, where the presidential couple remains entrenched, has been not to do massive tests of Covid-19, nor to inform the population about the results of the few daily tests they carry out. There has, therefore, been a deliberate intention to keep the country in the dark, while health alerts are relaxed and the virus progresses.

Since the World Health Organization made the pandemic official on March 11, Nicaragua has had enough time to design and implement a prevention strategy, but the regime opted for a policy of denial to maintain the supposed “normality” in the third consecutive year of economic recession, caused by the political crisis.

The absent ruler rejected all prevention and mitigation initiatives proposed by doctors and scientists, business chambers, civil society organizations, political opposition, and the Catholic Church, refusing to accept a public-private alliance to confront the pandemic.

For the dictatorship that is going through a terminal political crisis, the threat of coronavirus was an opportunity to blackmail the country and divide the big business owners, calling on them to request the suspension of international sanctions.

However, Ortega could not sabotage national unity, nor prevent new sanctions by the European Union for serious human rights violations. Once the blackmail failed, the regime discarded any prevention and mitigation actions, making it quite clear that its only interest is to collect taxes to continue financing the payroll of repression and State control, which allows it to remain in power.

Like President Trump in the United States and Bolsonaro in Brazil, Vice President Rosario Murillo stubbornly defied the scientists’ warnings, recklessly promoting large public activities. To its supporters, the regime promised that “thanks to God and the Commander” they would not be affected by the “imported virus” because the exceptional nature of our “family and community health system” would have immunized them. They failed to mention that Nicaragua continued to “export” positive cases to Cuba.

Consequently, the Government never applied the social distancing recommended by the WHO, nor did it decree a health emergency. This past weekend, Murillo continued to call for more than 2,500 public activities such as fairs, parties, and cultural and sports events throughout the country.

When the moment of truth arrived, when public information is most necessary because there is overwhelming evidence that community spread has already began, the dictatorship completely turned off the health information system. The official silence in the phase of exponential growth of the contagion is equivalent to a frontal attack against the citizens crusade “Stay at home,” a criminal conspiracy led by Ortega to weaken the main prevention effort to save lives.

By hanging on to power at any cost, Ortega and Murillo are confirming their utter contempt for the lives of citizens, medical and health personnel, and even that of their own supporters.

Censorship of public information and lying as State policy represent a recurring practice that is part of the DNA of the dictatorship. In reality, we are facing the same rulers who supplanted popular will at the polls, orchestrating frauds in the 2008, 2011 and 2016 elections.

After the April 2018 massacre, they tried to erase the dead from national memory to leave the crimes in impunity. And now, in the Covid-19 crisis, after having promoted contagion, they try to deny the existence of the fatal victims of the pandemic, of which there is no official record and are being buried in night-time funerals.

Our response as journalists and independent media outlets will always be to not remain silent and continue to report the truth, with the support of doctors and specialists and with the trust of citizens, to defeat this hateful wall of official silence, which is putting at risk the lives of tens of thousands of people.

It is time to save lives and demand the greatest protection for doctors and health personnel, but in Nicaragua we cannot make an extraordinary effort against the coronavirus to continue in dictatorship. The national challenge is to outline a resistance strategy to the threat of the pandemic and the dictatorship, which at this moment are the same thing.

We need a strategy that incorporates all the living forces of the country: the general public, civil and military servants and the political opposition, who must be part of the national solution. It must include unemployed workers and small and medium-size companies, which are the first affected by the worsening of the economic crisis. Likewise, the corporations, who face the crossroads of taking risks to promote political change or wait for Ortega to complete the total destruction of the country. All of Nicaragua must unite to get rid of a dictatorship that has allied with the coronavirus.