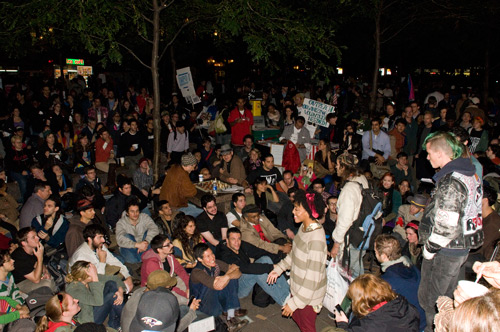 HAVANA TIMES, Oct. 14 — The media is finally aware of Occupy Wall Street (OWS), and of course, it is confused.

Ignoring the circus hysteria being churned out by some of the more conservative news outlets and focusing only on analyses that have seriously attempted to frame OWS’s role within current political trends, it is increasingly clear that many people are missing the point.

One of the biggest problems with western media coverage of anything inherently political is the need to frame all new phenomena within an identifiable context.

Comparisons to the Tea Party

Framing it historically should result in sound analysis, but since that history happens to be the simplified media version, instead we get premature comparisons to slightly older phenomena within the current election cycle. In short, we have both the mainstream and social media abuzz with articles and sound bites attempting to define OWS as the left’s answer to the Tea Party. 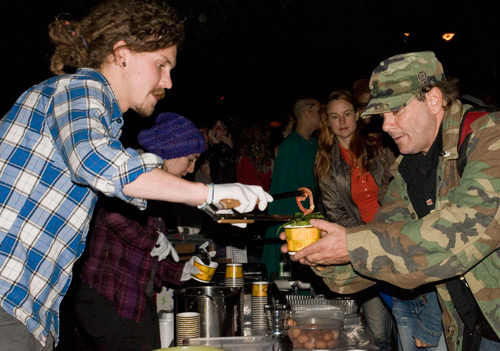 Jon Corzine, ex-Goldman Sachs chief executive and ex-Governor of New Jersey, told CNBC on Tuesday, October 11th, that OWS, like the Tea Party, is a result of general anxiety among the middle class.

He went on to say that “It happens to have a more left-wing point of view but it’s the same as the Tea Party in 2009. People are not satisfied that government is resolving the problems that matter in their lives. The less effective we are, the more protests you will see…”

The problem with Mr. Corzine’s remark is that it only admits fault at the level of governance. Corzine’s comment assumes that the system should work, and would work, if only governed properly. This system, a system of unfettered capitalism based on free market principles, would assume robust economic development to be the savior of the country’s ills.

However, after about a half century of increased deregulation, privatization, environmental exploitation, and economic imperialism, all rationalized through the lens of free market growth, the US is stretched thin and crumbling under the weight of contradiction.

Occupy Wall Street’s message is not a shallow reaction to economic plight. It is a direct challenge to the faulty economic policies that have brought us to this point. It is a direct critique of, as Joseph Stiglitz has argued, an economic ideology that pulls and tears at the natural relationship between people, money, and land, dis-embedding the economy from the basic needs of society and the individual. 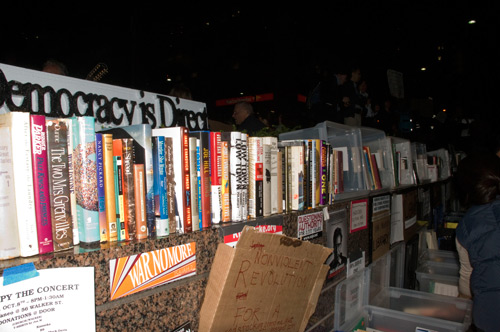 The Tea Party lays all their blame on a government they see as bloated and useless. They point to a political culture they describe as “business as usual.” This is a point of frustration that is understandable and is a feeling that resonates throughout the country. Unfortunately, their vision of change is not one of productive reform.

They seek to dismantle the social compact between the government and its people through vicious and unrelenting tax cuts in the public sector. In doing so they would destroy the only institution capable of protecting and empowering people in an increasingly globalized world economy.

With the absence of a strong government, capitalism would run rampantly, unchecked, and to the great misfortune of the majority. Not only does the Tea Party fight to continue “business as usual” by feeding the rapid economic lion in our country, they would also fire the handler and release it into the wild.

Despite confusion in the media and, understandably, in the minds of casual observers, Occupy Wall Street is a movement in solidarity. The differing voices of the crowd unite in their resistance to the notion that the status quo is fixed and unchanging, that unchecked capitalism is necessary for growth, and that the importance of growth and profit outweigh the needs of society.

While opinions differ over what role the government will play in their envisioned future, ranging from communism to anarchism, the camp itself offers a little teaser as to their general vision of society.

Liberty Plaza is currently occupied by an internally legitimate town government, and the story of its evolution can be used as an example of successful democratic socialism. 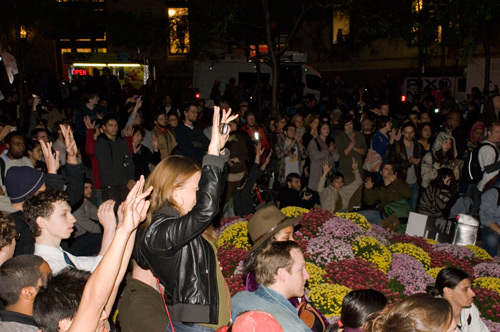 Every day the facilitators of OWS, activists trained in direct democracy, run the General Assembly. After attending at least one GA, either as an observer or as a participant, one of OWS’s more popular chants is immediately understood.

In the GA, every voice is heard. Every moral objection to a proposal is talked through and debated, and decisions are approved with a minimum of 90% consensus.

Not only are major decisions decided this way, such as the scheduling of marches, demonstrations, media outreach, and the drafting of demands, but also the day-to-day needs of the camp itself.  In this manner the camp has evolved into a makeshift town.

Responsibilities are divided up into working groups that act as committees, and every day a representative from the working group reports to the GA.

The working groups as a whole resemble a mix of public service, civil service, and organizational bureaucracy. In the public services sphere you have the Sanitation Committee, Food Committee, Comfort Committee (dealing with issues of shelter), Education and Empowerment, and the Medical Working Group.

The civil services sphere is mainly comprised of the Legal Committee, (supported by the National Lawyers Guild) which offers free legal advice and representation for protesters, and the Security team.

On the organizational level, a wide range of committees and working groups exist to address a variety of issues and logistics. This realm would include the Treasury Committee, Town Planning, Media Committee, Internet Committee, Facilitation Committee, and Outreach Committee.

Outside of organizational logistics, a long slew of committees meet on a daily basis to discuss ways of expressing and educating on the many social issues OWS represents. These include the People of Color working group, Political and Electoral Reform working group, and the Direct Action Committee, among others.

This makeshift governmental structure is one that provides and listens to the basic needs and political desires of its citizens.  More importantly, it does so in an all-inclusive and directly democratic format. 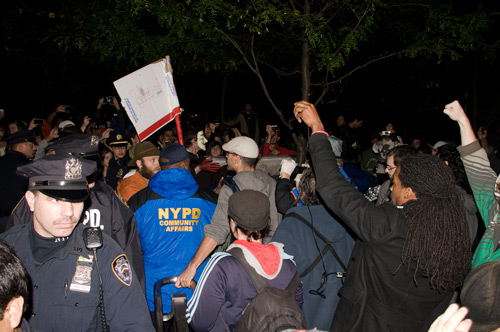 Liberty Plaza is a social democracy that has successfully created a network of social programs and working groups to create the foundation required for its people to thrive.

If not for this slow but powerful evolution of political organization, the occupation at Liberty Plaza would have dissolved and withered away to nothing.

Occupation in the manner of OWS is a double-edged sword. On one side you have an opportunity to affect real change in society, and on the other you face the health and sanitation risks of homelessness combined with a threat of chaos and dissolution as the cause grows.

Unregulated capitalism is very similar. On one side there is the opportunity to thrive and prosper, and on the other there is the risk that privatization and supply and demand will work against the basic needs of the citizen, e.g., environmental degradation, unaffordable health care, the draining of funds from the education system, and the type of financial speculation and gambling that sends entire countries into recessions and worse overnight.

It seems that the Occupy Wall Street protesters in New York are creating a society that encourages its citizens to thrive in its pros while simultaneously protecting them from its cons.

While the Tea Party complains of a corrupt and bloated government, Occupy Wall Street attacks and offers alternatives to the economic ideologies responsible for its corruption.

3 thoughts on “Occupy Wall Street Focuses on the Roots”