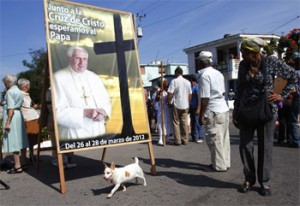 HAVANA TIMES, March 26 — Pope Benedict XVI, the head of the Catholic Church and the Vatican, arrived in Cuba today. He will be here on an official visit until March 28 after having been invited by the government and will be a pilgrim on the 400th anniversary the appearance of the La Virgen de la Caridad del Cobre figurine.

He will officiate over two Masses (in Santiago de Cuba and Havana) and will meet with President Raul Castro, possibly with Fidel Castro, as well as with Cuba’s bishops.

Recently, en route to the Americas and referring to Cuba, the Pope said: “It’s now clear that, as conceived, the Marxist ideology no longer corresponds to reality because it has no answer for the construction of a new society.”

It’s true: Marxism, as it was conceived for its application in achieving socialism in the twentieth century, never responded to reality as demanded by Karl Marx. Instead it served the interests of powerful groups and offered no new society as an alternative to capitalism.

Its set of political and economic dogmas — on the role of the state, the “working class,” the party, the political system of government, the management of the economy, forms of ownership and the distribution of wealth — was “intelligently” manualized as “Marxism-Leninism” after being “concocted” by Stalinism to justify the deviations committed in the Russian-Soviet revolutionary process.

Later an attempt was made to impose this as a system of “norms” on the rest of the revolutionary movement.

Equally, this “Marxism” never offered a model for a new society, since maintaining the system of wage labor and excessive state control failed to change the essence of the capitalist system of exploitation. It merely shifted private control to the state.

For Marx, the new society would have to pass through the abolition of wage labor and the withering away of the state.

Cuba’s foreign minister responded to the Pope’s comment saying that the government was willing to listen to and discuss with the Pontiff. He could have said other things, but at least this showed a willingness to talk.

Today it’s widely recognized, even by president Raul Castro, that the paternalistic, statist and centralized economic model generated by that set of concepts must be overcome. Nevertheless the formulations don’t go beyond “updating” and recognizing the need for “more democracy” in the political system in question.

Unfortunately, the restricted and controlled top-down discussions encouraged by the party-government have been insufficient to get us Cubans to agree on targets to be achieved or the path to take – elements that are required in this increasingly complex situation.

Whenever an event of this kind occurs, anywhere in the world where some of the people are discontent — for whatever the reasons — demonstrations result from such discontentment. Cuba is not an exception. All parties must act peacefully, respectfully and respectful of the interests of others.

Calling for more harmony and supporting understanding doesn’t imply disregarding the social, economic and political deficiencies of this present model, which is what the dissidents are attempting to focus attention on during the papal visit.

The worst forces of imperialism and the rightwing, who seek out analogies where none exist, are interested in the Pope’s visit creating a turbulent situation so as to capitalize on it.

The proponents of do-nothing conservatism — those who would hinder the inevitable progress of the socialization and democratization of economic and political power — are attempting to use the visit to demonstrate that all is well and nothing needs to change.

The party-government has asked people not to politicize the event, something extremely difficult to achieve in a country where the government’s daily discourse and its official media has politicized everything from education and public health, to food, sports, help for the handicapped, as well as work, friendship and humans relations in general.

It’s best to hope that everything takes place without any unpleasant incidents, without a violent response to any possible demonstrations that are peaceful and respectful of differences.

We can only hope for such a show of good sense and a commitment to democracy, and — at the same time — discourage those who might incite violence and create a climate of instability that could jeopardize the lives and well-being of parishioners and citizens in general.

The troublemakers on the extremes must be called on to relent, and no one within or outside the Cuban government should forget that the government is ultimately responsible for this visit taking place peacefully for everyone.

Now we will find out, or not, what the Pope is attempting with the Catholic bishops and the state.

In any case, I hope that the overall political maturity of the Cuban people, the readiness of the government-party in the face of the papal visit, together with the accumulated wisdom of the Catholic Church, contribute in some manner to the strengthening of trends that favor positive changes at this juncture.

The social doctrine of the Church encourages dialogue, reconciliation, respect for differences, love of one’s neighbor, protecting the indigent, fairness and social justice. Everything done in this direction in Cuba is positive.