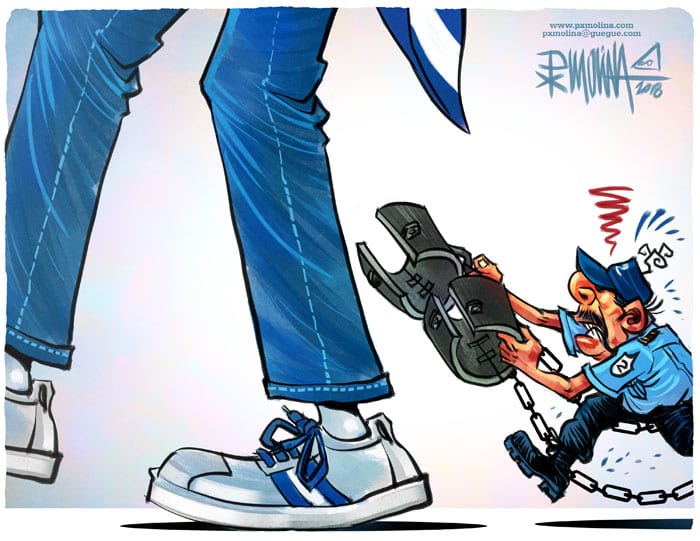 In recent decades, 80% of peaceful citizen struggles against dictatorships and authoritarian governments have triumphed

HAVANA TIMES – We know that the Ortega-Murillo dictatorship is not sustainable because it relies only on armed violence. It has imposed an undeclared State of Siege and Martial Law, turning Nicaragua into a sort of occupied country. That is why we also know that they will have to leave power, but we have no certainty of when or how.

Furthermore, we are aware that the main protagonist of this non-violent struggle is the citizenry and that peaceful resistance is the main factor to dismantle the regime. The rest is complementary. That is to say, it won’t be by only the measures of the US government or the Organization of American States that will liquidate the tyranny. The slogan “Only the people save the people” is true.

The peaceful citizen resistance is the basis for victory, but it has been neutralized for two months by the extreme repression of the dictatorship, without the appropriate reaction by the organizations that emerged with the social outbreak of April or those that existed before and that are forming part of this nonviolent civic insurrection.

The reactivation of the peaceful resistance is urgent because without it there will not be a victory over the “Ortega” dictatorship. It is needed to guarantee that the popular demands of freedom, democracy, institutionality and respect for human rights are fulfilled, plus everything else that transitional justice implies (investigation of the murders, punishment of the criminals and moral and material reparation to the victims).

Without a peaceful civil resistance reactivated, undesirable exits to the political and social crisis may arise, such as an agreement between former FSLN leaders, big capital and the Army; or armed outbreaks that would unnecessarily prolong the pain and cries, the tragedy of an entire people for many years and without any security of victory.

In recent decades, 80% of citizen’s peaceful struggles against dictatorships and authoritarian regimes have triumphed, and in all the main condition has been that nonviolent resistance must be sustained, which is not happening in Nicaragua, where a dangerous backflow has occurred faced with the repressive escalation of “Orteguismo.”

Of course, the life and physical integrity of citizens have to be preserved, we do not want more people dead or imprisoned, but neither should it be at the cost of suspending the resistance, which is not only carried out in conditions in which legality allows it, but also, and above all, when rights are denied. The peaceful insurrection does not ask for permission from the dictatorship.

The organizations that have mainly promoted the peaceful citizen rebellion such as the self-convoked movements of students and citizens in general, the Articulation of Social Movements, Organizations of Civil Society and the Civic Alliance, gathered in the Blue and White National Unity, are presenting themselves disconcerted and unable to react to the repressive wave.

Reactivation of the peaceful resistance of citizens requires a new strategy, changes in approaches and methodologies to develop activities and actions of civil disobedience, of disregard of the dictatorship as a government, of undermining the regime to push it to the negotiating table in which a peaceful solution must be found.

Carrying out activities and actions against the tyranny implies moving to a conspiracy and clandestine strategy that requires a powerful highly organized network of thousands of small groups or cells of between three to five people in the countryside and in the cities throughout the national territory, which become active to carry out actions that, although small, due to their simultaneity and massiveness, would be of high impact, and will hit the dictatorship.

Promoting broad organizational structures that include work commissions such as the so-called Blue and White Committees, is equivalent to moving a heavy train, at times when light civilian guerrillas are required to move carefully with supplies, security and communication at the same time to operate. And, that in a matter of minutes they carry out the peaceful actions they have to do, as for example, paint graffiti, distribute flyers or ballots, paste posters, launch blue and white balloons, install publicity banners, put up small barricades, etc., and withdraw in secrecy and quickly to their homes or safe houses.

It is about keeping alive the flame of rebellion, that independent journalists and communicators from Nicaragua and abroad, have something to report and comment every day, and that the dictatorship feel the actions of protest and of rejection towards it. In addition, that this active role tells other sectors and social forces that there is no solution without taking into account their interests.

Another premise of the civic struggle is that certain events become triggers of others, such as the call for a March on October 14 that led to the kidnapping of some 30 people on “Camino de Oriente” and the declaration of Marlen Chow to one of her interrogators, stating that she belonged to the women’s movement “pico rojo” (red lips).

Once she made this public, it became viral on social networks and had an international impact. If there is no citizen resistance, there would be no possibility of events that will catapult the struggle, that will generate repercussions and consequences and together with international events, trigger an acceleration of the crisis of the Ortega dictatorship and its eventual fall.

Finally, we know that with the criminalization of the street protests, the regime has put a dangerous plug on a pressure cooker that could explode with inconvenient repercussions, such as armed struggle, so that from every possible angle it is an imperative to reactivate the peaceful resistance to achieve “Que se vayan!” (that they leave).

12 thoughts on “Nicaragua: Reactivation of the Peaceful Resistance of Citizens”