HAVANA TIMES — A few weeks ago, on Holy Innocents Day (December 28th) to be exact, a Cuban journalist and a friend of mine Norges Rodriguez published an alleged announcement about upcoming changes in all sectors of Cuba’s social, economic and political life in 2018 on his Facebook account. It was even backed up with a photo taken from Granma newspaper’s digital platform. This announcement immediately generated important reactions on social media and it was shared by many different Facebook accounts.

When I read it, I immediately got in touch with Norges to ask him to send me the article, to which he responded that this was just a trick for Holy Innocents’ Day (similar to April Fool’s Day in some countries). I was overtaken by sadness when I found out that this was all just a game. Whoever reads the measures announced would think that they were completely real (because of the way it was written using the typical official language).

The news item spoke about a total opening up the economy, apparently establishing that only health, education, electricity services, mining, aqueducts and sewage and communal services would be managed by the State while the rest would become private or be passed on to private national companies and that the so-called “self-employed” could open companies, import and export products.

Meanwhile, the State Council would eliminate the need for “repatriation” for nationals who want to return and it would eliminate “citizenship loss” for Cubans. Furthermore, passport prices would go down to 60 CUC on the island and to 120 USD abroad and it would be valid for an extended period of up to 10 years. 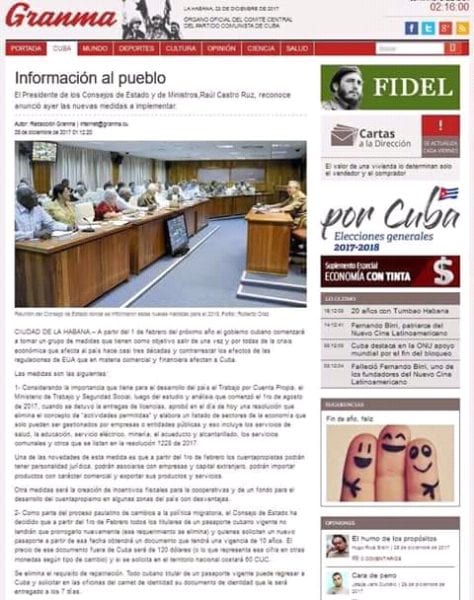 With regard to connectivity, it stated that the ETECSA Company would approve high speed connections without upload and download limits in homes and telephones for a flat 15 CUC tariff per month. Other measures spoke about freedom of the media, of political parties and freedom of speech. It seemed like it was the end of the Cuban people’s ills.

But, the most important thing about this article isn’t that I echo this false news and I don’t hope that Havana Times does the same, that isn’t my intention at all… However, I want to tell you a little bit about the other side of this announcement.

Norges tells me that the announcement even reached Cuban health volunteers in Brazil where they received it with great applause and jumped up and down with joy. Likewise, many Cuban families living in the United States called up their relatives in Cuba to tell them about the “long-awaited changes”.  Hundreds of people, myself included, even got in touch with Granma newspaper to ask about these measures to which the newspaper’s editorial team responded that they had never published said annoucement.

So you have an idea of just how far this announcement went, three days after Norges published the post on his Facebook page, he had 154K views and 90K reads. There were even people who were thinking about drawing up a draft bill with these measures and to collect signatures so as to send it to the National Assembly for them to be debated… there are still people who hope.

Anyone who might read this would say: How foolish! What importance does a joke like this have? However, it’s importance lies in people’s reactions to it; these measures are every Cuban’s dream, they provoked joy and tears, it was the end of the Cuban people’s suffering and even more so when many are hoping that 2018 is the year that things change here in Cuba.

But my dear readers… these measures are unfortunately just a hoax and the reality is that Cuba will start off 2018 the same way it ended 2017.  I only hope that we can see the day when some measures as popular as these are published.