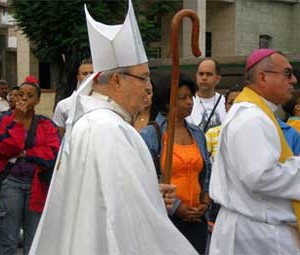 HAVANA TIMES — When someone speaks of the Catholic Church, we often think of it as a powerful institution that has immense political influence everywhere. I will address this issue in general terms and then focus on the case of Cuba.

The Catholic Church must be seen as an institution with two sides to it: the Vatican State and its religious congregations.

The former enjoys the authority inherent to an internationally recognized State that maintains diplomatic relations with other nations, relations that are both protective and binding. It is a peculiar State, given the Church’s presence nearly everywhere on the planet, in the form of a carefully selected population of well-disciplined religious personnel, organized into numerous hierarchical institutions.

In this sense, the Church is undoubtedly a powerful institution. Such power, however, does not in and of itself say anything about its specific political influence in each of the countries where these ecclesiastical bodies have taken root.

Cuba’s history exemplifies this quite well. Here, where the Church came under constant fire from a single-party system that espoused scientific atheism, the institution’s peculiar structure was used by Catholicism as a means to survive.

Though it survived the onslaught of the revolution, the island’s religious congregation did not, however, manage to extend its influence over Cuba’s population. The secular State formally authorized the practice of all religious creeds, within the confines of the Law. These were the years when the revolutionary leadership enjoyed the support of nearly the entire population.

At the close of the 1980s, Eurasian socialism collapsed and Cuba entered into the economic crisis known as the Special Period. The advent of the crisis led the Cuban Communist Party (PCC) to take the previously unthinkable step of accepting religious believers as members. Our country witnessed a veritable explosion of worship. Religions were back in style, but the Catholic creed wasn’t exactly the most popular.

Overwhelmed by material shortages and spiritually disillusioned, the Cuban people turned to the solace that religious institutions have always offered the devout, becoming practitioners of Protestantism or Afro-Cuban Santeria. The former throbbed throughout the nation, in the form of small neighborhood congregations, versatile and close to the people, ready to take on the evangelization of Cuba’s potential faithful.

Practitioners of Santeria, who had always been a part of Cuba’s cultural life, experienced a kind of rebirth, suddenly not only permitted to practice their religion but also protected by the State because of their intimate link to the country’s folklore, which was to be cleverly deployed as a tourist attraction when tourism again became an economically important industry in the country.

These were not the best of times for Cuban Catholics, who, I dare say, fell considerably short of expectations in terms of their evangelical capacity. Accustomed to the “State within the State” structure of old, a structure that had allowed them to survive over time, but they failed to secure greater popular support.

This is the reason why, two decades later, when no one speaks of the Special Period anymore, Catholics are rather behind in terms of the number of parishioners they manage to draw into their flock when compared to other religions that are widely practiced in Cuba. The Church’s capacity to mobilize the people is thus very limited.

There is an element of the processes we’ve been describing which we mustn’t lose from sight: though Santeria and Protestant congregations account for the majority of Cuba’s newly-converted, these institutions lack the strong administrative structure inherent to the Catholic Church. This reduces the political potential of these two institutions.

Santeria practitioners, most of who belong to the Regla de Ocha Ifa congregation, are officially represented by Cuba’s Yoruba Cultural Society. Protestants are grouped under the Ecumenical Council of Churches.

While both institutions openly support the revolutionary government, the Catholic Church, given its “State within a State” structure, has been able to maintain certain distance and neutrality.

I recall that, in April 2011, the PCC called a meeting of religious associations for the purposes of creating an alliance that would work for the country’s future. The meeting saw the enthusiastic participation of Yoruba practitioners, Protestant pastors and even Freemasons (who do not exactly constitute a religion).

However, Cardinal Jaime Ortega Alamino declared: “The work of the Church isn’t founded on any kind of alliance, be it vertical or horizontal, with any State. Rather, it stems from the right of ecclesiastical institutions to spread the love of Jesus Christ throughout the world, in accordance with its mission. The Cuban State has, in the Church, neither an ally nor an enemy.”

Catholicism also enjoys limited access to the media, through which it can divulge its message and coordinate spaces for open debate, worship and (respectful) discussions about Cuba’s present situation and future, from a critical perspective on government activities.

It would be illogical to ask of the Church something outside the scope of its philosophy and role within society. As the Cuban cardinal has said again and again, “the Church cannot be the political party of the opposition which is today inexistent in Cuba.”

I firmly believe that Cuba’s Catholic Church, nourished by the wisdom this religious institution has accumulated over millennia, is aware of its limitations, particularly when it comes to its real influence over the parishioners who visit its places of worship, drawn, many a time, by the building’s interior décor or the magnificence of a ritual such as a baptism, not by any kind of personal faith in what is preached there.

What can Catholics do to change Cuba? It is up to them to answer this question. Today, though they are a real political force to be reckoned with in the country, it would not be advisable to exaggerate their significance as regards Cuba’s future.

As a kid, I would often go to the Gothic-styled Sagrado Corazon de Jesus y San Ignacio de Loyola church, popularly known as the Reina Church. I would turn my eyes to the heavens, where the spire of the church bell tower, considered the highest Christian structure in Cuba, fused with the blue sky. Today, as an adult, I look upward but do not forget my feet are firmly planted on the ground.
—–
Vicente Morín Aguado: [email protected]

One thought on “The Real Power of Cuba’s Catholic Church”