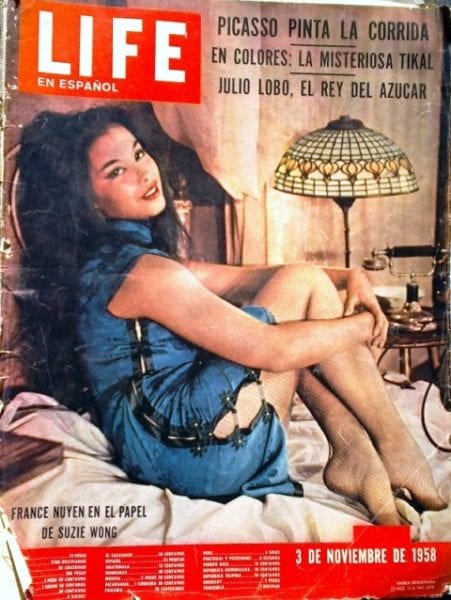 HAVANA TIMES — Yesterday, I had the fortune of finding an old Life magazine. Carefully turning the frail pages, printed on November 3, 1958, the living-color images of France Nuyen caught my eye. The reason I ended up paying 3 CUC (US $3.50) for the magazine, however, were rather more compelling: one of the headlines on the front page promised an extensive article on Julio Lobo, “the Sugar King.”

At Havana’s Napoleonic Museum, I became familiarized with the story of this sugar magnate born in Caracas, brought to Cuba by his family before the republic was founded. An agricultural engineer who had graduated from Columbia University in 1919, he became the chief authority in any debate surrounding the world’s sweetener par excellence.

By 1958, Julio Lobo controlled half of what was once Cuba’s number one industry, the pride of the nation and an essential part of the nation’s culture and history. Some of the information provided by Life magazine is eloquent:

Of the 50 million tons sold that year, Cuba account for the largest volumes: 6.4 million, 6 of which were exported. The United Sates was the main buyer (with a guaranteed quota of 3.3 million), while an additional 2.7 million were sold on the international market. A third of Cuba’s population was employed by this industry, which accounted for 80% of the nation’s exports.

There was much speculation about the immense fortunes of this man, capable of buying and reselling 350,000 tons of the product under agreements he signed without the slightest hesitation. More interesting were his expert opinions on the country’s sugar industry and reality.

That November of 1958, when Fidel Castro’s bearded rebels were making their way towards the island’s western provinces, the renowned admirer of Napoleon had just won a battle as worthy as any fought by the great, Corsican conqueror: he had purchased the properties held in Havana by the legendary chocolate industry leader Milton Hershey. This including the country’s largest refinery, three modern refining and housing facilities, a port for sugar shipments, the country’s sole electrical railroad, a peanut oil factory, a sisal plant and 24,000 hectares of the most productive land.

Julio Lobo earned both success and hatred for himself: trade union leader Eusebio Mujal called him “public enemy number one,” while a renowned businessman declared: “I don’t want to know what would happen to Cuba if Lobo died tomorrow.” The keen-scented agricultural engineer, responsible for the world’s largest collection of volumes on sugar, actually sought to change Cuba’s stagnant sugar industry panorama:“Current laws favor the old ox-driven carts and go against the modern truck.” With this, the magnate sought to express the need for profound reforms, considering that, through modernization, the country’s most important activity would leave thousands of workers out of work and therefore demanded a comprehensive understanding of the system, something difficult to ask of land owners, workers and part of the governing elite, accustomed to having a reliable market in the United States.

As has been said, the facts can be stubborn, and they ended up proving the obstinate Venezuelan-Cuban right: other nations managed to overtake Cuba and to claim the coveted Sugar King throne. In the end, and by decree, the new leaders left 49 of the 161 refineries that existed when Life published its article in operation. Now, they are pulling out their hair trying to rebuild that immense productive potential.

Julio Lobo (1898-1983) died in Madrid 33 years ago, the age of the Comandante when he drove triumphantly into Havana. All of his properties – 16 sugar refineries and more than 400,000 hectares of land, as well as many other assets – were confiscated by the socialist State.

Che Guevara, the Minister of the Economy for the new government, invited the renowned expert to offer him counsel. An interesting anecdote about their conversation during those nebulous times remains:

“You, Mr. Lobo, are a world-renowned expert. Before, people didn’t seek your advice in Cuba, some even condemned you,” Che Guevara said to him.

“Well, if I work for the new government, how much will you pay me?” Lobo asked.

The figure, stemming from strict communist logic, was laughable, particularly for a former millionaire. Che Guevara continued to charge: “You no longer have anything in this country. What you have left is your experience. Do you realize this? You’ve been stripped nude!”

The dramatic reply of Lobo, accustomed to the unpredictable ups and downs of the New York Stock Exchange, was blunt and to the point: “Look, Comandante, I was born nude, I’ll probably die nude and, incidentally, I had some of my best times in the nude.”

Half a century later, we still don’t know what will come to cloak this emblematic part of the country that vanished.