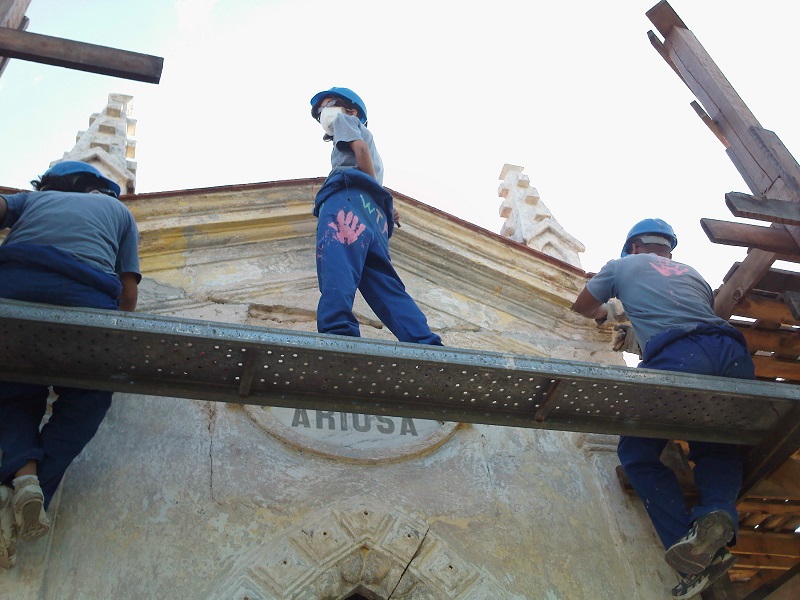 HAVANA TIMES – It was 2012 when I started studying at the Workshop School that belongs to Havana City’s Historian Office. I had chosen to specialize in General Restoration, where you learned all about Mural Paintings.

The group was made up of both men and women, although there was a stronger female presence in the group. In the beginning, I thought that restoring mural paintings meant sitting with a paintbrush and repainting without much more effort than patience. However, as time passed, I learned that this was just one aspect of this complex and beautiful job.

To summarize, we needed to learn the basics of construction and some women in the group rejected this idea, falling back on the stereotype that such is a job for men. We were all taught the same things in class, there wasn’t any discrimination in terms of the activities we did in class. You had to clean a wall, prepare the mixture, put it up on the wall and we all needed to learn how to do it. And that’s what we did, or at least I think we did. 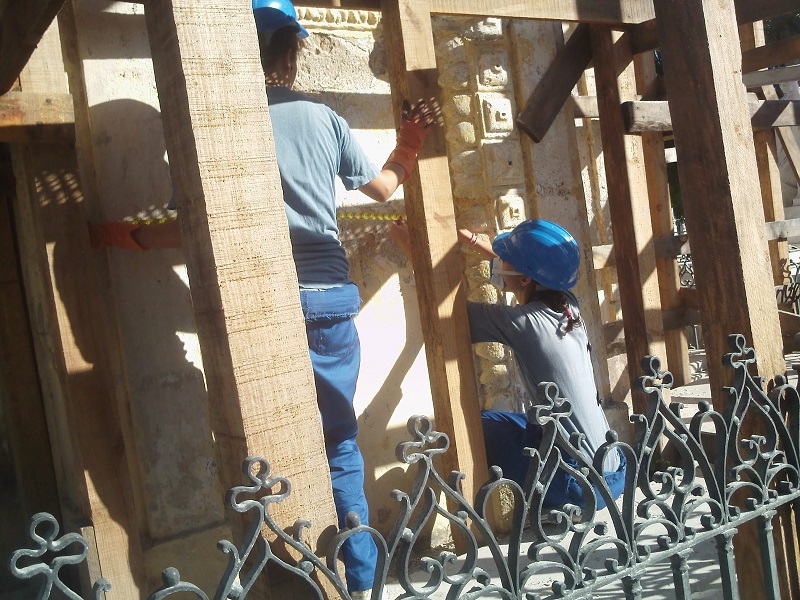 The dynamic of the school involved us doing practical work while we were studying. That’s when gender differences came to light, in the kinds of work we did. The men were assigned more heavy-duty jobs and we were given the less exhausting ones. They had to transport materials, prepare mortar, set up the scaffolding, stick up the concrete mixture covering large surfaces. While we cleaned the surface with brushes, took measurements, drew up plans and worked in small spaces reintegrating the original layers.

Decisions were arbitrary, there wasn’t a specific regulation that stipulated who could do what. I guess that it was the stereotypes we “fragile women” dragged with us, that we shouldn’t be doing heavier work and that the strong men should be doing the physically challenging work. If a woman in the group went to help out (because this is how you learned), she was practically excluded from the task at hand and she was separated so she wouldn’t get too tired, her hands wouldn’t crack or overwork herself. 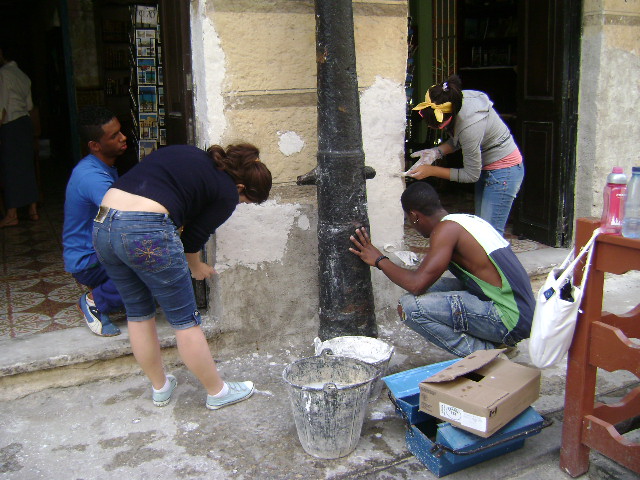 Personally-speaking, I always tried to be active. I helped to set up the first scaffold and my extremely slim build didn’t stop me from taking the risk and doing things that demanded an extra effort from me. I was tired at the end of the day, my hands were ruined sometimes, and my backbone got kicked out of shape, but I didn’t give in. I wanted to learn and I didn’t agree with the fact that we had certain comforts while the men were tired out.

They called me Quijote, I got on really well with nearly everyone on my course. However, the reality was that I had to work twice as hard in order to be considered apt for the hard work.  So much insistence paid off; I’d managed to get them to include me in groups that were for more demanding jobs and there weren’t many women involved. I wasn’t the only one, not at all. Some other classmates joined whatever task was at hand and that’s how we made our way. There were also other women who didn’t feel at ease; if we could do that work, it meant that they could too, but they didn’t want to. 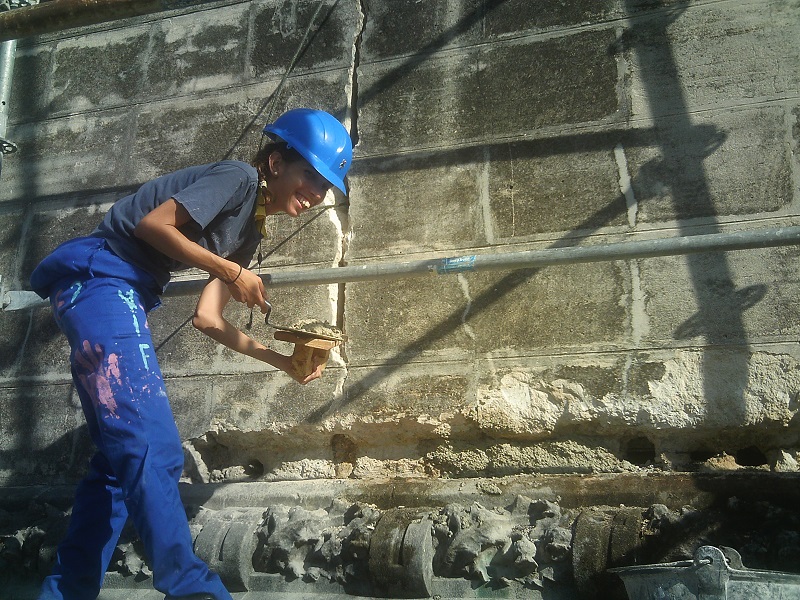 One day, some of the stronger members of our group weren’t there. Some classmates were absent for different reasons and work at the Colon Cemetery couldn’t stop. Building materials needed to be transported in wheelbarrows and there weren’t very many of us. I immediately grabbed my wheelbarrow, other women came with me and even though we didn’t carry the same load as the men, we were able to transport what was needed. Of course, when the teacher went to speak with the other women who weren’t very happy, about doing the same thing, they didn’t agree with him.

I have to admit, it really bothered me to see the group working, practically divided by gender. The male space could be conquered with a lot of effort, the problem was that not every woman wanted to do this. I have to also admit that as the leader I was (I was the monitor or the group’s educational guide), I didn’t always have every woman’s approval, the men were no longer the problem in our fight for inclusion, it was the women who weren’t willing to pitch in. That really got on my nerves and I had some unpleasant talks with some of them. My line of thinking was that, as a team, we should all be working the same if we were able to. 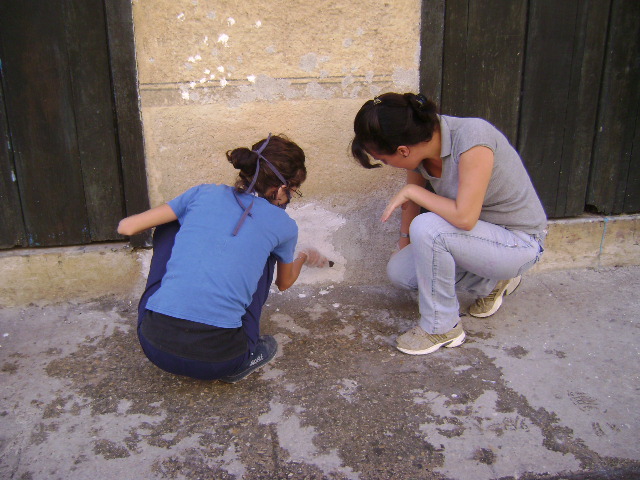 The men carried on in their role of being the harder workers, that didn’t change. They were considered for any job first, and it was assumed that they knew everything about construction and if they didn’t, that they could pick it up quickly. The women who were interested and proved that it was possible for us to do the same jobs as our colleagues, were gradually also taken into account for almost any job. So, we worked on the interior/exterior walls, placed roofs, made the preparation layers, etc.

You can’t change the world. This is a phrase that always comes to mind when I think about my time as a student at the Workshop School. My teacher said it to me after seeing me try really hard to get all of us women involved in the same activities. Looking back now, I realize that I didn’t change the world, I couldn’t, but I could change discrimination in the workplace a little, and I contributed towards minimizing the machista characteristics that dominated our group.

I stopped being a victim of exclusion by men because I was a woman, and I conquered this space along with other classmates. I stopped feeling like men sheltered me at work, or the other women looking at me horribly or questioned by them who weren’t interested in being anything but an assistant in a job that needs everyone’s collaboration.

This story is an example of the extent the social construction of gender features in our reality. The workplace isn’t exempt from this, especially in certain jobs that have a sign for men/women. This experience also proves that discrimination is not a man’s fault, but women’s fault too as we can also contribute to this segregation and even, have a machista attitude just like men do when we divide tasks at work, because of centuries of patriarchy. The fight to be accepted and taken into account is tiring, just like it is to deal with those women who are happy with the “ease” and “care” machista attitudes give them.

3 thoughts on “Roles in Cuban Workplaces: Are They How They Should Be?”