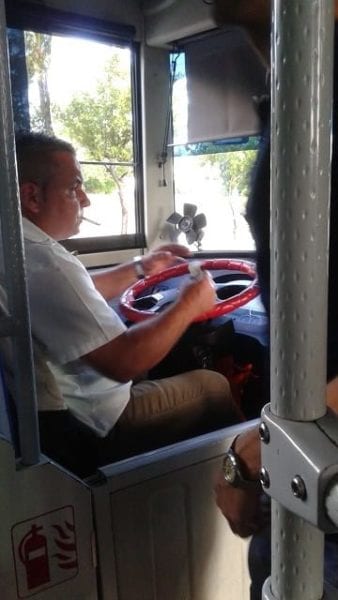 HAVANA TIMES – One day I was seated next to a smoker who, without hesitation, released a puff of smoke on me, which bothered me a lot. Without thinking I made a simple comparison, but very effective.

I explained to him that his vice was the cigarrete, and as a waste product of that there was the smoke, which was pouring into my face. I said it was like drinking a beer and the result of this is a lot of urine.  I asked if he would like I urinated in his face?

His head down, he understood and moved away.

There are a number of violations that we suffer daily in our environment and that ignore all respect towards those around us. One of these is the smoker, who without hesitation shows off their whim anywhere, be it in an open or closed setting. Bus drivers of virtually all the passenger transportation lines of the Havana Transport Company are a great example of this.

One fine day I got on a bus and the driver was talking to another passenger about the customers who sometimes got uncomfortable and caused them bad times, he was attaching all kinds of bad behavior to the passengers.

I couldn’t resist butting in. I asked him how can you get angry if the first person showing disrespect is you who smokes in the bus and don’t respect anyone. Very insulted, he tells me that this is his job and that he is authorized to do it.

Then I gave myself the task of finding out if it is true that they are authorized to smoke on the buses, I thought maybe yes, because as they pay so little, and in spite of the salary stimuli implemented it is somewhat complicated to be a driver, and so to keep them maybe they allow them to annoy the passengers with impunity without thinking about their health, the same can be a child as a pregnant woman.

Sometime later I asked a driver friend what was the truth about all this. He said that’s crazy, you can not bother the passengers in that way and less with such a sensitive issue. I don’t know what’s wrong with the drivers because when I smoked I knew it was wrong and I also blamed myself, until I left the habit that brings nothing good with it.

I wonder what can be done about it; are there already laws for that kind of indiscipline or will they have to be created? If the latter is the case, it must be urgent because it is almost an uncontrollable situation, and not only the driver’s smoke, but also those who accompany him as fare collectors. If you say something about it, they get upset, and can even take out a baseball bat to fight with a passenger who only demanded his right to a smoke free trip.