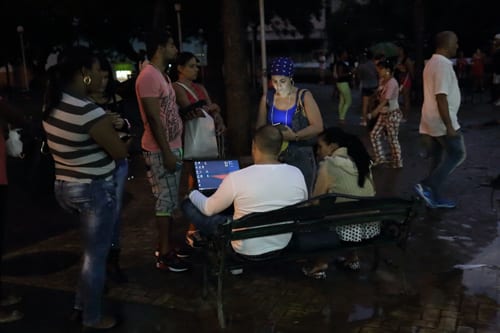 HAVANA TIMES — Internet has become the Cuban market of any street food, it doesn’t matter how expensive and unaffordable it is, at least most people don’t seem to mind.

It starts at any time of day, but this Internet scene has its prime time in the afternoon/evening, when pingueros (male sex workers) go down to the Malecon and start the show: What would you like me to show you? Look here, can you see it properly?

The flurry of questions is accompanied by a response where you can hear the rudest comments, maybe even a justified compliment. There are also women there too with their daddy, and “when are you taking me there?”, “the money you sent has finished”, “it wasn’t enough”, “tell me if you already made the transfer.”

WIFI hotspots already have their own discourse because that’s where Cubans show themselves for what they really are, full of insecurities, contradictions and confusion. This is perhaps the most real-life press office for gauging public opinion.

You can also see a guy wearing a cap which prevents you from looking him in the eye, poorly dressed, or half-dressed, wandering in this alleyway or that and stopping behind people who use apps like IMO (an instant messaging service) to hear and watch everything. Then he’ll go to some hidden corner in any Cuban city and inform State Security or another similar monster. Informers spread themselves out at WIFI hotspots in search of what the regime calls “subversion”, which nobody can define yet.

In the middle of the night, prostitutes open up their legs and show their goods, cellphone in hand, sex which travels in megabytes to Australia, Canada or the country of the wicked. This is how many foolish relationships, with no future, have started, such as that of Italian man Andrea with a Cuban woman from Marianao who she wooed via IMO and took every last cent from, making him sell his home in Italy and is now demanding he take her out of Cuba. But, prostitution isn’t the only thing at WIFI hotspots, although Cuba is already famous the world over for being a land without appearances, without a face.

Some people desperately ask their relatives in Miami for help because the difficulties they are facing are considerable, the lock on the seafood shop on the corner is mouldy and covered in spiderwebs on the door. There’s nothing for anyone born on this island of fish, except for claria (also known as African catfish) or the mocking excuse of chicken for fish. Cuban people call hard-currency stores which sell meat “museums” with contempt, which is where they go to see relics.

“Listen, what you sent me wasn’t enough for the girl’s sweet 15 party, not even to take her photos,” a desperate mother says. “And when are we going to Guyana? Things are crazy here.” Some foreigners can’t understand why Cubans complain so much, but they would have to live under the most outrageous and long-living Communist dictatorship in the Western Hemisphere to think differently.

Because yes, what you hear at WIFI hotspots is outrageous: you hear it but you don’t believe it. This is a real and exhausted people’s outcry, which doesn’t appear in newspapers where “everything is wonderful and everyone marches as part of the system” or where young people are depicted “remembering Lenin’s 1917 revolution with joy.”

When you ask one of these pingueros who are 18-25 years old about these things, they don’t even know about them and they don’t care. They are more focused on the elderly foreigner who is going to pay for the hostel and beer and maybe even a trip to England.

I know of a provincial town, a tourist resort, where men are becoming extinct, as the majority chase after European women who then take them to their countries, unions which end up being marriages. These benefits corrupt relationships between Cubans and foreigners and mark the country’s boring sun and beach tourism with the label “sex destination”. Semi-naked, explicit photos are being sent at WIFI hotspots, maybe even showing their noticeable penis and then the beautiful, Caucasian woman appears immediately, keen to “take what he’s carrying”. People here call this profession chasing foreigners: “fight for your cassava, Taino.”

Lastly, I almost see any Cubans reading dissident websites or reading about Cuba’s human rights situation, much less opening a blog to interact online, because that would be “throwing your money away” in the words of those who go to WIFI hotspots. An hour of internet access costs 1 USD, so if you’re going to invest that money, invest in sun and not in shade (what a way to refer to leaving Cuba and not go looking for years in jail for saying some truths on Facebook).

The Cuban government is well aware of everything that happens at WIFI hotspots, it has its poorly paid, poorly dressed informers. There isn’t a problem while there are only prostitutes and pingueros, that is until the day activists and independent journalists come along.