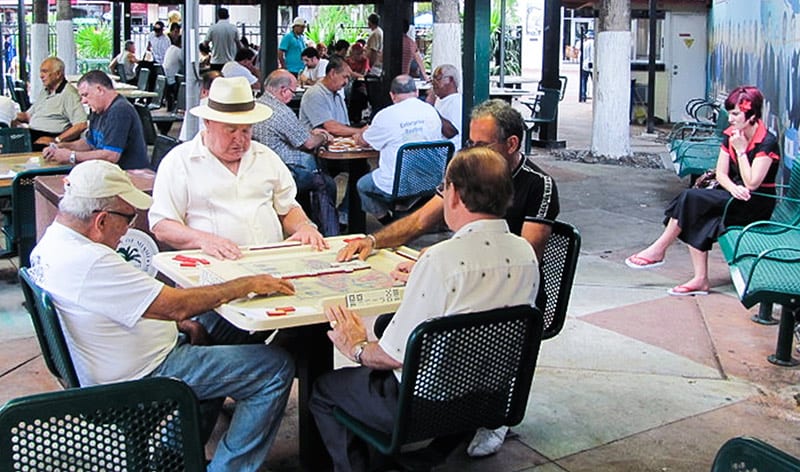 HAVANA TIMES — “Cuban immigrants are cashing in on US welfare and returning to the island, making a mockery of the decades-old premise that they are refugees fleeing persecution at home,” says the Florida newspaper Sun Sentinel.

The report is rather surprising, as Cubans who arrive in Miami are allegedly fleeing “political persecution.” This is the basis of the Cuban Adjustment Act, which offers asylum to all Cubans who set foot on US soil.

The lifting of restrictions on visiting Cuba prompted the first doubts regarding the political nature of Cuban immigration. About half a million of those who allegedly fled communist persecution spend their vacation on the island every year.

It was none other than President George W. Bush who detected the “disparity” between discourse and reality, so he decided to twist reality a bit. He threw out the baby with the bath water, barring Cuban-Americans from traveling to the island every year.

Cuban émigrés, however, would not be stopped by this. They started traveling to Cuba via third countries to avoid detection my US immigration. I saw this personally. The first day the restriction took effect I was traveling from Miami to Cuba, changing planes in Bahamas.

“No law is going to keep me from seeing my wife,” a man from Pinar del Rio told me. A beautiful mulatto woman then said to me, laughing: “The problem is that Bush doesn’t know my mother. Who’s going to explain to her that I can’t go see her?” she told me.

When Obama lifted these restrictions, there was a veritable explosion of such visits and the expansive wave continues to spread. Many thousands are returning to the island to take advantage of the country’s economic reforms.

For decades, it was impossible to hold residence in both countries. The Cuban Adjustment Act demands that Cubans remain in the USA 12 months and 1 day to grant them a Green Card. One’s residence on the island was also lost if one remained outside the country more than 11 months and 29 days.

Cuba’s migratory reform extended the period of time a Cuban could spend abroad without losing their residency to 24 months, a measure that it made it possible for Cubans to hold two residencies and live in Cuba and the United States alternatively. It was the dream of many come true.

The Sun Sentinel describes the case of an elderly Cuban woman who secured residency in the US through the Cuban Adjustment Act, saved up a bit of money, returned to Cuba, bought a house and now lives off the welfare money that the US government deposits in her account every month.

The newspaper quicks up a big fuss about this, but, could they just now be discovering that 90% of Cubans who arrive in Miami are actually immigrants looking to improve their finances? Didn’t they know that the United States is where they “become” victims of communism in order to obtain residency there?

Curiously, many US newspapers and anti-Castro politicians are now condemning the Cuban Adjustment Act, seconding the Cuban government, which has been asking for decades that the law be repealed, as it encourages illegal immigration.

The flow of illegal immigrants from Central America, Mexico or the Dominican Republic, however, is just as significant as Cuba’s, and none of those nationalities can turn to a piece of legislation that will automatically grant them residency in the United States.

Beyond the political maneuvering involved, there is an undeniable reality here. These hundreds of thousands of Cuban immigrants have helped lift Florida’s economy. Many of them received their professional training in Cuba, such that the United States didn’t have to spend a cent on their education.

It seems fair, then, that one grandmother should benefit from welfare payments financed by the wealth created by her “grandchildren.” And, if her plan is to live more comfortably back home, the United States stands to save quite a bit on health services for this elderly woman.

Cuba will not become yet another star on the US flag and Miami won’t be turned into a Cuban province, but half a century of hostilities has brought these two together inseparably, and the smartest thing to do seems to take full advantage of the opportunities opened us by this situation.

Many are starting to realize this: artists come and go, the self-employed are opening branches of their businesses in Miami and émigrés are returning to Cuba to set up ventures with the capital and experience they’ve acquired in a market society.

US companies are also starting to understand this: telecommunication corporations, hotel chains, airline companies, farmers, cruisers, port service providers. Naturally, they aren’t coming to invest out of sense of “solidarity,” but because they are convinced they can obtain profits in Cuba.

If all the fuss is about breaking the law, well, even President Obama does so when he encourages businesspeople to look for the “cracks” in the embargo in order to trade and invest in Cuba and advises US citizens they should lie to visit the forbidden island for tourism purposes.

This year, more than 100,000 US tourists who travel to Cuba claiming they are undertaking academic or religious trips (when in fact they only intend to enjoy the beaches, drink mojitos and go for a ride on a vintage Chevrolet) will break US law.

All Cubans who benefit from the Cuban Adjustment Act when they are not fleeing political persecution, as well as US immigration authorities who grant them entry to the country knowing full well they are economic émigrés, are also breaking US law.

We should be blaming, not people, but the dubious legitimacy of the laws that regulate relations between the two countries. Within this context of generalized illegality, using a Cuban grandmother as a scapegoat is journalistically childish and, generally speaking, cowardly.
…..
(*) Visit the website of Fernando Ravsberg.

5 thoughts on “Taking Advantage of the Cuban Adjustment Act”