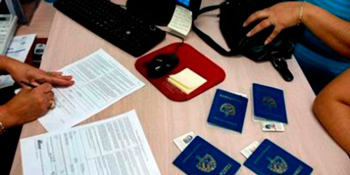 HAVANA — Now it turns out that the main enemies of Cuban Adjustment Act are those Cuban-American politicians on the far right who, to a great degree, built their careers thanks to the existence of this legislation.

What’s paradoxical is that, when they question it, they use the same argument that has historically sustained the Cuban government’s position: the allegation that the beneficiaries of the law are political exiles is false, therefore their exceptionality is not justified.

To encourage the emigration of Cubans was an essential component of U.S. policy against Cuba beginning in 1959. One of the myths was to turn into “exiles” persons who were not political targets and welcome them indiscriminately to the United States, violating the principles of selection and ingress established by the U.S. immigration laws themselves.

As a result it became necessary to grant the Attorney General special powers to “adjust” the legal status of those persons, and so the Cuban Adjustment Act came to be.

Seen in its formal aspects, there are not many reasons to criticize this law. As Democratic Congresswoman Zoe Lofgren said recently, rather than eliminating it, it should be expanded to treat other immigrants in the same way.

What’s paradoxical is that, when they question it, they use the same argument that has historically sustained the Cuban government’s position.

The problem, then, is not in the law itself but in the policy that originated it, which the very government of the United States and a majority of the USAmerican people now consider obsolete and counterproductive to the national interests.

For the Cuban-American far right, the promulgation of the Cuban Adjustment Act was a net gain: it legitimized the climate of belligerence against Cuba, the basis of their political agenda, and facilitated an expansion of the social base that sustained them and their swift incorporation into the USAmerican political dynamics.

All of this contributed to an increase in their influence in the U.S., on a local and national scale, with the economic benefits arising from the law.

This picture changed radically once the social component of the emigration from Cuba changed and the Cuban migratory policy adjusted to that reality.

The “new émigrés,” those who arrived in the U.S. after 1980, transformed the Cuban-American electoral picture to the point that they became a potential threat to the predominance of the far right in the political life of the Cuban-American community.

The reaction has been to blackmail them with a threat to amend the law if they retain their links with Cuba, or even try to repeal it, so as to delay the new immigrants’ access to U.S. citizenship and postpone their electoral impact.

Ultimately, to make them believe that the normalization of relations between the U.S. and Cuba, which the new émigrés have always advocated, could harm them in the long run by leading to the elimination of the advantages that they now enjoy.

Anyway, this shift in course is not easy for the Cuban-American far right to perform, and the results are extremely doubtful.

Fearful of the pressures that exist against this law, in 1996 they managed to anchor it inside the more general budgets established by the Helms-Burton Act, so, to revoke it or even amend it as they’re trying now, they must open a “Pandora’s box” whose consequences could be even more dangerous to their interests.

To any government, it is difficult to modify positions held during a long time and, although it may seem that the more important elements have been modified, i.e., the reestablishment of diplomatic relations and the willingness to move forward to a better level of coexistence, inertia will continue to influence many specific issues in the negotiating process.

The other side of the coin is the reduction of the Cuban Adjustment Act’s importance for the Cuban policy. The exceptionality of this law, whose objectives are visibly destabilizing, continues to be perceived by Cuba as a political affront, a source of abusive “thefts of talent” and an impediment to a normal and secure migratory process between the two countries, as expressed by the migratory accords signed by both.

Beyond the law, the negative consequences of its connection with the interpretation of the “dry-foot-wet-foot” guideline for the treatment of illegal Cuban emigrants (they’re returned if they’re intercepted at sea but admitted if they manage to step on U.S. soil) still persist, due to the human implications and the problems of safety generated by the illegal trafficking in persons.

However, in practical terms, to eliminate the Adjustment Act no longer has the priority it had for Cuba in the past, inasmuch as emigration does not cause the political and social effects it did in the past. In fact, illegal emigration represents a problem more serious for the United States than for Cuba.

Despite this, according to statements by U.S. officials, the U.S. Government will not change its decision to maintain the Cuban Adjustment Act and the “dry-foot-wet-foot” interpretation in its treatment of illegal Cuban migrants.

Various reasons could explain this behavior. To any government, it is difficult to modify positions held during a long time and, although it may seem that the more important elements have been modified, i.e., the reestablishment of diplomatic relations and the willingness to move forward to a better level of coexistence, inertia will continue to influence many specific issues in the negotiating process.

Other reasons could be related to the need not to contaminate the debate over the migratory reforms approved by Obama with an issue of lesser importance, such as the Cuban Adjustment Act and Cuban immigration in general, as well as sending the wrong signals to a major sector of the Cuban-American electorate that is in favor of the Democrats.

Attorney Ira Kurtzman, a specialist in migration issues, has said that the most likely scenario is a more restrictive application of the Cuban Adjustment Act, especially on the subject of treatment of illegal migrants, which does not contradict the law and is convenient for the two countries.

What is evident is that the Cuban-American far right has been caught in its own trap and, to escape, will have to chew off a foot, as some animals do.

That might help them to survive, but will inevitably render them lame, making them a more vulnerable prey in the food chain that rules U.S. politics.

9 thoughts on “The Contradictions in the Cuban Adjustment Act”