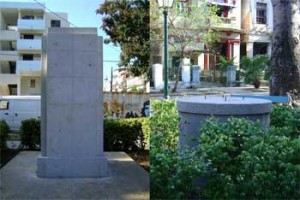 HAVANA TIMES, March 25 — A few years ago, the statue of Austrian composer Johann Strauss Jr. disappeared from a small park located on the corner between Linea and G streets here in Havana.

At that time I naively thought that the sculpture of the “the king of waltz” had been removed for restoration purposes.

Recently I noticed the absence of another statue: the bust of the Turkish revolutionary Mustafa Ataturk, which stood on the now-empty pedestal of another park located on Linea Street between K and 13 streets in the Vedado neighborhood.

Though these robberies remain as unsolved mysteries, I have the sneaking suspicion that they were works of “economic vandalism.”

Everyone who lives in Havana has witnessed people roaming the streets seeking to buy any little bit of gold.

This odd link makes me suspect that those statues, bathed in shiny gold plating, were probably melted down in some underground forges.

It’s unlikely — though not impossible — that any tourists would get involved in the trafficking of such works of art.

Vandalism is like a silent war against the patrimony of our nation. It can happen for various reasons – from youthful rebelliousness, a fetishism or apathy on the part of the community and state institutions to the trafficking of works of art.

Everyone in this city knows of the strange case of the John Lennon statue – its glasses have been stolen a countless number of times.

The National Museum of Fine Arts was able to display the works of Michelangelo, Raphael, Da Vinci and Goya, however nothing is known of the whereabouts of these today.

The Colon Cemetery — once considered the cemetery with third greatest collection of funerary art work in the world — has seen its holdings decline noticeably over the years, and according to the memories of the older workers there, not all of those oeuvres were consumed merely by time.

The consolation I’ve found in all of this is that if the homes of the living have deteriorated so, those of the dead can’t be expected to fare much better.

The National Library has been looted for several decades. This started in the 1960’s when a janitor started deciding the fate of books by grouping them into two piles and tearing off the covers of those that had any value. He would then throw away the leftover reams of pages.

What hasn’t been lost from such theft by users, workers or managers has been destroyed by moisture, microorganisms and time.

I’ve even met people who have chosen to steal books rather than see them destroyed by rot.

The country’s policy against literary heritage went further still. In the 1970’s, the provincial government here would seize the houses of the dead (many of whom belonged to the former middle class).

After having their properties and furniture assessed, their private libraries were burned in Cayo Cruz, a former landfill located next to Havana Bay.

As was so well demonstrated a short fiction film titled Utopia, one cannot hope to see an impoverished and ordinary population act as the guardian of cultural heritage.

This, no matter how much the intellectual aristocracy wants to instill its values and tastes to working people, pretending to share their culture of European aesthetics and rationality.

One thought on “The Enigma of the Golden Statues”