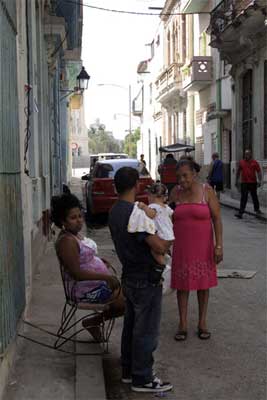 HAVANA TIMES — I’m not of those who cower in the corner whining about the economic problems in Cuba; to the contrary, I’m one of the warriors who are always moving forward – despite the sacrifices I have to make or the work and extra hours I have to put in.

I try to take care of my problems and live the best I can since I believe that crying doesn’t help, although it’s true that it’s sometimes the only way we find to express our desperation.

Unfortunately, in our country it doesn’t matter much if you’re a professional or a technician. Someone who has studied or works harder doesn’t live any better than anyone else.

What does make a difference, though, is having a good small business, receiving family remittances or working in a job that deals in hard currency. It hurts us to admit it, but that’s the truth.

More than once I’ve been frustrated when getting to the end of the month dealing with all the shortages that nobody in the world should have to deal with – much less those of us who work 48 hours a week.

Cuban workers spent about 20 days a month trying to piece together the puzzle of ensuring breakfast, lunch and dinner, and figuring out how to buy toiletries or other necessities of life. We also have to do dealings “under the table” to buy the clothes and shoes we need.

But some people are even worse off than those of us who work and depend on our low wages.

She doesn’t have a formal job or anyone to help her. Still, she has survived so far on her manicure services and some other sewing work.

But with the new manicurists who have started their private businesses in the neighborhood (younger ones and with greater selections of services), as well as the tendency for people to only wear imported clothing, all of this has contributed to less money coming in to Odalis.

Consequently, she has begun to suffer increased family problems.

The fact of living with shortages is something common for ordinary Cubans but doesn’t mean that we’ve become accustomed to it. I think I came to understand that better than ever yesterday while visiting Odalis.

When I arrived to the door her kids Paula and Angel were whimpering and literally bellyaching. I immediately knew why: they were hungry. Anyone who as any sensitivity knows that there’s nothing more heart wrenching than the suffering of a child.

I felt my own heart tighten from the tears and cries of the children, but I felt even worse for her. Only a mother can understand the pain of another mother in a situation like that.

Like my grandmother used to say, “Don’t complain so much. There’s always someone worse off than you.” This time it’s Odalis: the most unfortunate person in the world.

13 thoughts on “There’s Always Someone Worse Off”