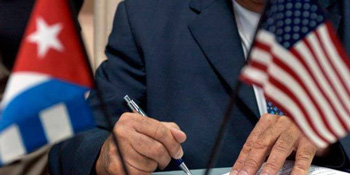 HAVANA TIMES — What happened?  I don’t know a single analyst who predicted the magnitude of the accords reached in the negotiations between Cuba and the United States, and for that we should thank both governments.

The discretion maintained is proof of the interest of the parties involved, including Pope Francis and the Canadian government, a reflection of the world’s desire to solve the problem.

The negotiations were conducted with a high degree of professionalism and in a climate of sovereign equality and mutual respect, as the Cuban side had demanded, making sure that all details reflected those conditions.

Both governments achieved their objectives:

Why did it happen?

The U.S. government acted for reasons that transcend the case of Cuba and respond both to its national interests and, specifically, to the interests of the Democratic Party as it looks to the 2016 elections.

Although the official U.S. version emphasizes the need to change the methods of its policy toward Cuba, objective factors show that it wasn’t only the inadequacy of its methods that made that policy unsustainable.

For more than half a century, Cuba has demonstrated its ability to resist an integral subversive policy where the only element missing was direct military intervention. That possibility was always present in the U.S. foreign policy but, for diverse reasons, the U.S. did not dare apply it to Cuba.

As acknowledged by Obama himself and his Secretary of State, John Kerry, U.S. policy against Cuba ended up isolating the United States on an international scale, particularly in Latin America. It endangered the very existence of the Pan-American system, through which U.S. hegemony has been articulated in the region.

In addition, it became an unpopular policy in the United States, contrary to economic groups interested in the Cuban market. It even lost a majority support from the social base that supported that policy within the Cuban-American community, opening opportunities for the Democratic Party with a view to the 2016 elections, especially in the state of Florida.

What can we expect?

The main question is the possible repeal of the steps taken by the Obama administration, either by the action of the Republican majority in Congress or by a change in the political scenario, if the Republican candidate wins the next elections.

President Obama acted within the executive powers granted to him under the Helms-Burton Act. Although certain legislators, especially the Cuban-American far right, will try to raise as many obstacles as possible to the implementation of his policy, the Congress will find it difficult to bar the President from acting as far as he deems convenient within the framework allowed to him by law.

In fact, the Republicans won’t be able to present a cohesive bloc against Obama’s decisions because important Republican sectors also support the change of policy toward Cuba. Therefore, it does not seem likely that the issue of Cuba will be chosen by the GOP to articulate a front against the President, as will happen in other issues in the country’s domestic and foreign policy.

However, Obama cannot proceed any farther either, unless the Helms-Burton Act is repealed, and here the Republican sectors that oppose the changes have a chance to keep the topic from being included on the Congressional agenda. Logic indicates that the Republican leaders in both chambers will act in that manner to prevent a split in the party, and have stated so publicly.

As a result, the most likely scenario for the next two years is that the Cuba policy will proceed within the limits imposed by Helms-Burton, and its advances will depend on the President’s will.

Although it is true that this policy may be modified by a stroke of the pen by whoever becomes president in 2016, diplomacy by executive action is not strange in U.S. foreign policy, where the president generally enjoys that faculty.

Holding on to the achievements will depend on the advances to be made in the next two years and the economic and political interests that, as the result of such advances, develop in the U.S. regarding Cuba, influencing the behavior of whoever becomes U.S. President.

The challenge of Cuban policy will be to facilitate such progress without undermining its sovereignty and its own national interests.

One problem will be the conflicts resulting from the persistence of the blockade in many aspects, pending problems between the two countries and the insistence of the U.S. in maintaining a policy of “promotion of democracy” that implies meddling in the domestic affairs of Cuba.

Other confrontational issues will inevitably emerge from the differences resulting from each country’s foreign policy. This will be a factor on almost all the international stages, but especially in Latin America, where U.S. policy remains very aggressive against the progressive governments and movements.

The meaning of the recently achieved “normalization” of relations will be to establish a climate of coexistence between two opponents who, in the negotiating process, never concealed their differences.

With all the inconveniences this implies, the “normalization” has been a civilized step forward that hopefully will serve as an example to the rest of the world and will prevail in the future ahead.
—–
* Jesús Arboleya Cervera, Ph.D. in history, is the author of numerous books on U.S.-Cuba relations and the Cuban-American community. He is a regular columnist in Progreso Semanal/Weekly.