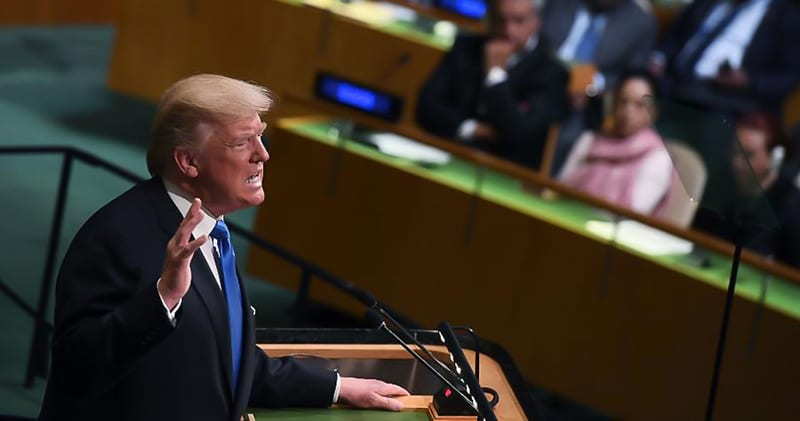 HAVANA TIMES — US President Donald Trump spoke at the United Nations last week insulting the Cuban government and Granma newspaper – the Cuban Communist Party’s official newspaper – published this speech in full so that every Cuban could read it.

This wasn’t a slip-up on part of the state’s censorship apparatus but rather the opposite; it was one of their few acts of lucidity. The tone and content of this speech are so out of time and reality that it stirred wide rejection among Cubans.

Trump wasn’t even very original: “The scourge of our planet today is a small group of rogue regimes that violate every principle on which the United Nations is based,” he said almost copying George W. Bush word for word.

He even went one step further than his predecessor, “The United States has great strength and patience, but if it is forced to defend itself or its allies, we will have no choice but to totally destroy North Korea,” he said in front of representatives from across the globe.

Trump threatened with a war that will affect every one of us. A military face-off between two countries with nuclear weapons can only end in a radioactive cloud of incalculable proportions. We all lose no matter who wins.

In Afghanistan, a “new” strategy is being launched: “our security interests will dictate the duration and reach of military operations, (…) and not timelines established by politicians.” More troops for longer with more deaths.

Ever since Alexander the Great, every occupying force in Afghanistan has buried itself in long and bloody wars, before being kicked out. It’s a story like the one in Vietnam, thereby meaning the US will continue to fall into the same hole.

It continues using the same guise of the world’s lifesaver with Venezuela and he declared that “As a responsible neighbor and friend, we and everyone else have one goal: to help them win back their freedom, to recover their country and to restore its democracy.”

We already know what this US “help” translates to in Latin America. They have “helped” us many times with coup d’etats and invasions in Guatemala, Brazil, Grenada, Chile, Panama and the Dominican Republic, just to name a few cases.

They also “helped” us in the Southern Cone. They orchestrated Operation Condor, which helped dictators to capture, make disappear (murder) tens of thousands of people. In Uruguay, they “helped” us by sending experts in the “scientific” use of torture.

Going beyond what is happening in Venezuela, Latin American countries need to really think about what they want to do. Accepting US leadership in the hope of “finding solutions” to the Venezuela crisis would be like putting a pedophile in charge of educating a troubled child.

John Foster Dulles, President Eisenhower’s State Secretary said that the “US doesn’t have friends, only interests.” And this principle has been proven today when talking about democracy, the US condemned Venezuela but armed Saudi Arabia to the teeth.

In his UN speech, Trump criticized some countries for violating Human Rights and yet he spoke very favorably about his trip to Saudi Arabia, a country which treads all over political, civil and religious rights and sentences peaceful dissidents to death.

Riad punishes homosexuality and he treats women as if they were minors under the guardianship of their father or husband. The only “step forward” that it can show in the field of Human Rights is the recent authorization of women to go to soccer games in exceptional cases.

Obviously, publishing this speech in full was the best political propaganda the Cuban press could do, thereby ensuring that there isn’t the slightest doubt about the “ideology” and personal traits of the White House’s new resident.

If a nuclear war with Korea is avoided, there is still some bad news: Trump says that Cuba is one of these “rogue regimes” that he will fight against. The good news is that there are so many of these and some are so complex that he won’t have time, even with two terms as president, to be able to “help” all of us.

13 thoughts on “Trump Insults Cuba, Offers US “Help” to Fix the World”