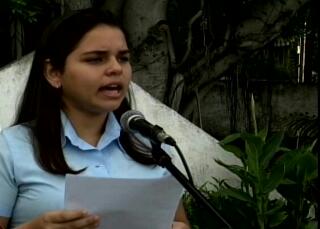 HAVANA TIMES — On June 20th, the national board of the Junior and Senior High School Students Federation (FEEM) gave its opinion about Mr. Donald Trump’s announcement a few days earlier.

This is what the letter sent by the national board of this organization said:…The Junior and Senior High School Students Federation, representing over 300,000 members that are studying at this level in the country, and as a legitimate organization within our civic society, firmly condemns the US president’s statements, as well as the measures being contemplated in the directive known as the “National Security Presidential Memorandum on Strengthening the Policy of the United States Toward Cuba”…

The organization also stated in this document that the measures announced by the new US president are harmful to both the US and Cuban people, by reversing the rapprochement process between both countries.

… our organization supports the Revolutionary Government’s statement, demanding respect for the sovereignty of our country and for them not to interfere in our country’s domestic affairs…

All of this took place in each and every one of the junior and senior high schools across the country, really early in the morning before classes had even started. 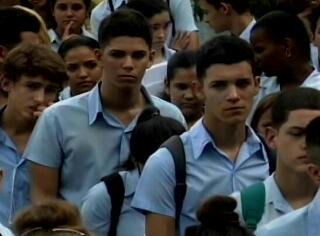 I was present at the event which took place at one located in Vedado, along with a Cuban TV IT systems team, and I had the chance to see some of the young people present and their impressions, who preferred to remain anonymous. These people (the FEEM) are always doing the same thing, a great deal of lies for fun which Trump won’t even hear them, and Raul  listening either – I don’t really care about Trump, at the end of the day, Obama also did things and my life continued to be the same, doing the same thing and with the same problems.

The statements that I could pick up on reveal the general lack of interest young Cubans who make up the ranks of the organization, none of those interviewed agreed with the document that was sent generally-speaking and they even understood it to be “more bla-bla-bla,” they use to refer to something that doesn’t interest them).

I was a leader in the FEEM during the 2014-2015 academic year, and I can assure you that not even the student “leaders” themselves agreed with what they had been sent to read in front of their group, as the theater we have to put on to read such things that we don’t believe in and that we have to do so as not to be labeled and sanctioned for having “ideological problems”, is really embarrassing.

I don’t mean to show you the students’ agreement or rejection of Donald Trump’s words, no, my objective is more direct than that: to highlight something that affects us more than these two political standpoints, that is to say, the Cuban youth’s lack of interest and faith they have in our “social” organizations.

It seems that hypocrisy continues to taint each and every one of “civil society’s” organizations and it doesn’t look like it will lessen, what it takes and continues to take from us everyday are the young people who have less and less aspirations of joining these organizations’ ranks.

11 thoughts on “Trump Won’t Hear Them, but Raul Isn’t Listening Either”