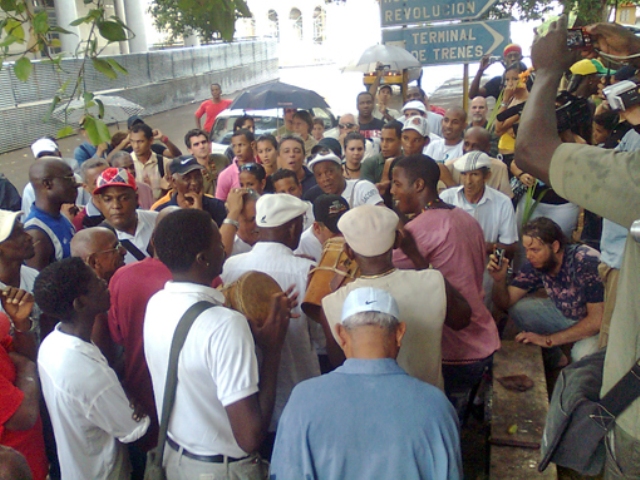 HAVANA TIMES, Dec. 7 — At this point it’s no news to the readers of Havana Times that on November 27, 1871 (the day of the execution of eight medical students by Spanish colonial troops), a group of five black Abakua tried to rescue them, though as it turned out they too were slaughtered.

Nor is it news that this past November 27, homage was paid — for the fifth consecutive year — to these five “ñañigos” (members of that fraternal society) at the site where they died, at the corner of Morro and Colon streets in Old Havana.  Readers are also aware of the disclosure that a plaque was unveiled commemorating the action, and that a procession marched from the site to the mausoleum of the eight medical students, where flowers were placed at the monument.

Official tribute had been paid to the students during the morning of that same day through a march that is held year after year by medical students from their faculties and by other students from universities throughout the country.

But what is not new information for the readers of this website is indeed news to Cuban university students.  Through the years they’ve learned of the firing-squad executions of the students, and they’ve paid homage to them, but they’ve remained unaware of the existence of those black Abakua who gave their lives trying to save the ill-fated students.

Those who know about that action didn’t learn about it in school; they found out through friends, online publications, hearing researcher Tato Quiñones, reading a brief article published last year in the Granma newspaper or because they heard a story about it on the radio this year.

Even history students were in the dark

When I say they didn’t tell them about this in school, I’m not referring only to those studying engineering, medical sciences or teacher careers – that wouldn’t be surprising.  I myself graduated with no idea that five black ñáñigos had tried to rescue the eight medicine students.  Likewise, I’m speaking of people majoring in history, people who should possess the most knowledge of both world history and our own.

I’ve had the opportunity to converse with several of them over the last few days, and all of them told me they had heard no mention of this event during any of their years of study.

One of them said something that was entirely true: such students can’t be expected to know everything since history is very broad.  But what’s striking is that they know the details around the shooting of the eight students yet were completely ignorant of something else related to that event that happened the same day.

In any case, what’s important is that thanks to the thorough research and popularization of the truth realized by Tato Quiñones, the Negritude Brotherhood, the Haydee Santamaria Critical Thought and Emerging Cultures Collective, young historian Mario Castillo and other people interested in justice being served and honor being received by those who deserve honor, the truth — in a slow, but overwhelming way — is beginning to appear before people.  Truth was the street and grasped by all of the onlookers who stopped on Saturday at Morro and Colon on the street Saturday before last to ask what was the reason for the playing of the Abakua drums and the crowd that had assembled.  Some day this will enter our universities and our official history.

It’s also fair to thank to our police officers.  On other occasions I’ve criticized the police because most of the people they stop on the street to ask for their IDs are blacks and mestizos. I myself have been a victim of that outrageous profiling. But on Saturday, November 27, they were there to stop the traffic when we took flowers to the mausoleum of the medical students.